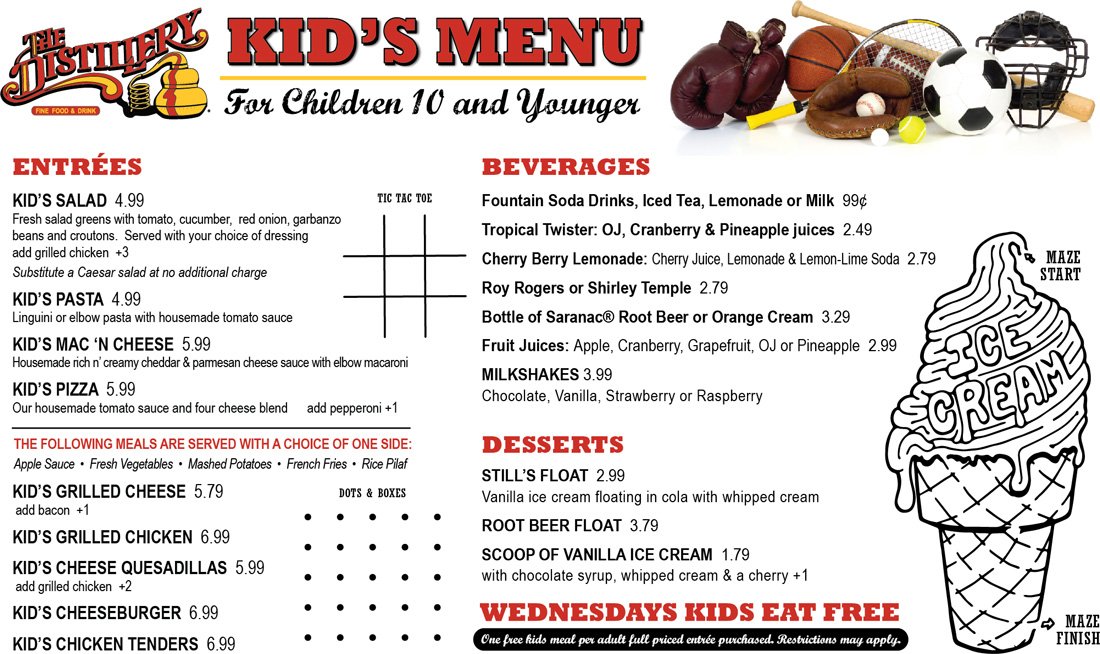 Back in the day, we weren't given a lot of choices as children - for some odd reason, we never noticed.  By the way, who brings their kid to a restaurant called "The Distillery"?

I am sure you've been through this at one time or another in recent years.  You go to a restaurant and some indulgent parent is trying to "reason" with a screaming 5-year-old, asking them what they want to eat.  The kid doesn't know - he can't even read yet.   And yet, his Mom is asking him to select from a number of items on the menu.

When we were kids, our parents ordered for us - and we weren't asked what we wanted to eat.  If we were lucky, there would be a "kids menu" which was designed more for parents than kids - offering low-priced entrees to encourage parents to bring their kids to the restaurant.  The menu was pretty basic - maybe two or three items and that's it.  Today, children are given extensive choices, and their choices are catered to, even if they don't know what they want.

I guess there is no harm in this - other than other diners having to endure the temper tantrums of other people's children.   I was in Walmart the other day and a kid was acting up - maybe 3 years old - and his Dad gave him a quick whack on the bottom.  I sort of smiled, because that's how it was done back in the day, and no, we didn't all turn into serial killers.  The Dad saw me and immediately took on a sheepish look - as if expecting me to turn him into the child abuse authorities. That's where we've gotten to - a swift and slight whack on the butt is in the same league as letting your kid freeze to death, starve to death, or beating him to death - all are on the same plane today.

And when it comes to "reasoning" with five-year-olds, may trendy parents today are having the "gender reveal party" years after birth of the child, when the child "decides" what gender to adopt.  If you want to "change genders" once you are 18, go for it.  But children?  That's too many choices at too early an age.

There are valid reasons why parents often have to make decisions for spastic children - kids will run out in front of moving cars, fall off the garage roof, or put their hand on a hot stove, unless you give them some sort of negative feedback that certain behaviors are wrong.  You are not doing a disservice to a kid by punishing them, but actually a favor.  The real disservice is to let a kid do whatever the hell he wants to, and he ends up getting hurt (emotionally or physically) as reality isn't as lenient as the parents.

And sadly, this is what happens to the "spoiled" child, which I can attest to, at least in part.   My Mother was often quite indulgent when we were kids, and we were basically allowed to run wild as spastic monsters.   Of course, this made Dad very unhappy, as he would come home and wonder what the heck was going on while he was at work.  He used to deride my brother and I as "Prince Tom and Prince Robert" - assuming correctly that we were spoiled little shits who really didn't care for him and his rules.

Of course, this all comes from good intentions gone awry.   My Mother no doubt she felt she was doing us a favor by letting us have a good time.  But some of her comments were a little disturbing.  One of her mantras was, "Childhood is the best time of your life, so I want you to enjoy it to the fullest - and you'd better, because it all goes downhill from here!" - or something to that extent.   It was an odd message to tell a five-year-old, as it made it seem that adulthood was a part of life best skipped.  Just kill yourself at age 14 (as she tried to do) and be done with it - you've experienced the best part of life already - just skip the rest, it's just messy parts.

Not only did I find out she was wrong, but dead wrong.   My adult years were far more enjoyable and rewarding than my childhood.  Yes, it was fun being a spastic little monster and not having to worry about much - although even kids have worries.  But being an adult in control of my own life (to the extend the almighty or probability allows) was much more fun than being told what to do, when to do it, and where and how.

But part of being an adult was learning a lot of harsh lessons that I wished I had learned earlier in life.  What lack of discipline I had as a child was later enforced upon me by society, circumstance, and reality itself.  A lot of wishful thinking I indulged in as a child - and my family indulged in - turned out to be not workable in the real world.  Turns out the banks weren't so keen to have me as a customer when I bounced checks all the time.  Insurance companies didn't want me as a liability when I ran stop signs and sped everywhere.  It took years and years to overcome the weak thinking (and bad driving habits!) I learned as a child - that "everybody does that" and that banks and insurance companies were "jerks" for insisting on rules.

I am not sure where I am going with this, other than I realize now that kids want and crave boundaries and rules, and when you offer too many choices to a five-year-old, they often throw a tantrum.  But believe me, I also appreciate now how hard it must be to be a parent, particularly these days, in an era of too-many-choices too-young, of anti-vaxxers, and helicopter parents.   How do you raise a kid these days, when all their friends have cell phones at age ten?  Hell, back then, we thought kids were spoiled if the parents got them their own landline.
You can learn rules and boundaries at an early age and be well adjusted - or be a wild child and be disciplined later on in life by society.  The jails and prisons of this country are full of the latter.
Newer Post Older Post Home