Georgia On My Mind

Overnight, Biden leads in Georgia by 1,100 votes, with more from Fulton County (Atlanta) to be tallied.  Biden may win Georgia.   Trump claims that "Democratic States" with Democratic Governors are illegally fixing the election.  But what about Georgia?   Are the Republican Governors conspiring against him as well?

The Old South is the New South which is the Old South - turning Democratic again, but a different type of Democrat.  Gone is George Wallace "Stand in the Schoolroom Door" pro-segregation Democrat, in is a new, more progressive Democrat, as well as middle-of-the-road Republicans disgusted by the antics of Trump, Qanon, and other GOP nutballs.

On another note, Alabama (yes, Alabama) voted to amend the Constitution to eliminate racist language.  Mississippi changed its State Flag.   Symbolic victories?  Perhaps, but also a sign that even conservatives realize that something has changed and it is no longer cool or acceptable to be racist.  Trump didn't get the memo.

The same is true across the "Solid South" - Texas was actually in play this time around, something that may come as a surprise to someone who has never been to Texas.  To be sure, a lot of people from "Up North" have moved to the South to take tech jobs in the new economy.  These are folks with advanced degrees who are not impressed by conspiracy theories and are actually repulsed by the far-right embracing them.   Again, the whole thing has backfired on the GOP, which just assumed we were all dumb-ass rednecks willing to believe anything.  But even rednecks have their limits.

The counting still goes on.  And even if Biden wins, it won't be over.  The court challenges will continue, and hopefully the Supreme Court won't do something stupid like overturn 200 years of election precedent by claiming that only votes counted the day of the election matter.   Because if that was the case, than every single election in US history is invalid.

Again, the GOP believes that people will go along with this argument - even their supporters.

What will happen next?  It is anyone's guess, although I think the shitstorm will continue until GOP leaders sit down with Trump and tell him the party is over.

In the meantime, cheer up.  This cartoonist has made a series of cartoons about what Trump will be like after Trump.  It is on Reddit, so you have to scroll down to read them from the beginning.... 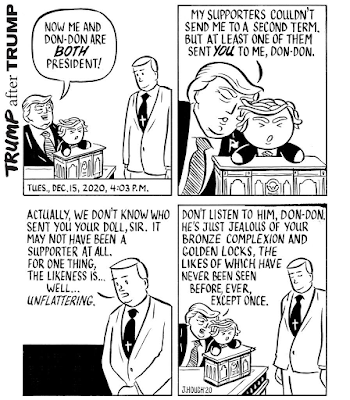