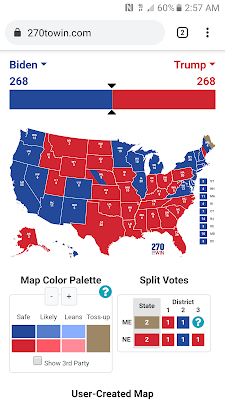 Whatever the outcome of yesterday's election, the country will be divided for four more years, at least.

(UPDATE:  I downloaded this map at 3:00 AM when I was half asleep.  It takes 269 to tie, not 268.  Maine has four electoral votes, two of which are allocated.   Pundits are now saying that Biden will get 3 of 4 of Maine's electoral votes, which means a tie is unlikely.  If Biden can win Arizona and Nevada (where he currently has a slim lead) then he gets to 270 with or without Pennsylvania.  Stay Tuned!) 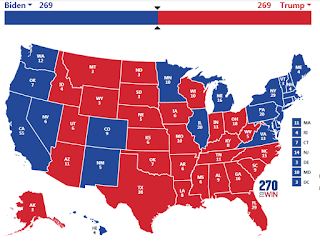 There are possible combinations that could still end up as a tie - just not very probable right now.

It may take days for all the absentee ballots to be counted and a final election result certified.  And of course, at that point, the court cases start.  Trump has a plan - to call all the mail-in ballots fraudulent and then claim victory based on in-person voting alone.

But assuming Biden wins, we still have a divided Congress - the GOP holding the Senate and the Democrats holding the House.   Government action will come from Presidential decrees and Supreme Court decisions. Real legislation will be hard to come by.  If the Supreme Court invalidates Obamacare, there will be no replacement, regardless of who wins the White House.  And that is exactly what Republicans wanted in the first place.

In other words, the long national nightmare is far from over.  Expect this shit-storm to continue to 2024 and beyond.

But looking at the electoral map and the current results last night, it occurred to me that an electoral tie may be likely.  If Biden can take Nevada and Arizona (where he currently leads) as well as Michigan and Wisconsin, he will have 268 electoral votes.  If Trump takes the others - he gets the same result.

Nancy Pelosi then decides the winner.   You can hear the howls of protest already from the Right - Biden would be an "illegitimate President" and the election "stolen" - which is probably what they will claim in any event, if Biden wins Pennsylvania after the mail-in ballots are counted.

It is sad, but not unexpected.

There were some small victories last night.   We are headed to a runoff election in Georgia for one of our Senators.  The "free for all" voting (used to replace a seat that was appointed) resulted in a ballot of a dozen contenders, none of which reached 50% of the vote.  Whether people will show up in January to vote again, remains to be seen.

The weird thing is that a plethora of third-party candidates appeared on the ballots, many of them only in a few States.  Who voted for Kanye West or Jesse Ventura?   People unsure of the concept of voting, to be sure.  Hey, they could have won, if only 200 million people wrote-in, right?

This is why Democracy fails, time and time again.  Well, at least it doesn't always operate at a very efficient level.

On the other hand, the Chinese and Russians are very efficient, aren't they?  No pesky opposing party, and people who speak out against the government are swiftly dealt with.

Democracy is indeed the worst form of government - until you consider the alternatives.  It may go down the road like an old oil-burning jalopy, veering from left to right, radiator always on the verge of overheating, but it does get you there, in one form or another.

Sometimes, gridlock and stasis are not bad things. When government "get things done" often it turns out to be a bad idea.

So have hope.  It isn't quite the end of the world, no matter how the election turns out.