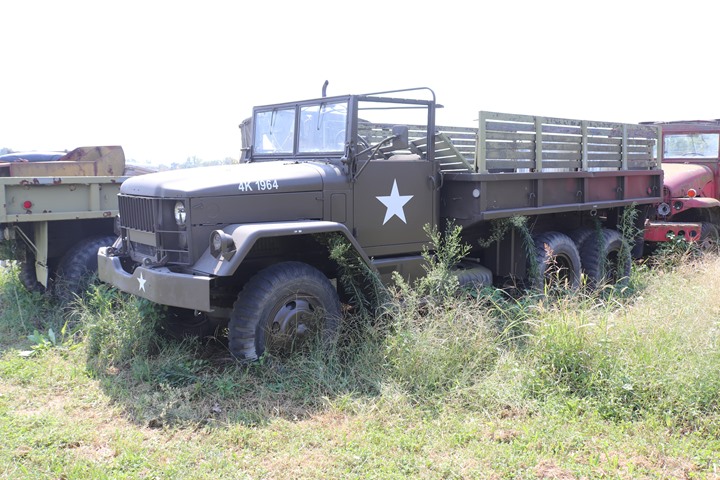 For some reason, people in the country like to collect old school buses, military trucks, fire trucks, and the like.  This represents a huge squandering of capital.

When you travel through rural areas, you tend to see the same things over and over again. And one of them is the "collector" who has a yard full of old vehicles. Usually these comprise school buses, military trucks (6x6 "duce and a quarter" trucks which are virtually undrivable on regular highways), old airport buses, city buses, and of course, fire trucks.

These things, which cost hundreds if not thousands of dollars at government auctions or sales, just sit in the side yard rotting away.  Dad takes the seats out of the bus and scatters them all over the yard, and then uses the bus as a storage shed for some old siding, which slowly rots through the floor boards.

It is, of course, an example of hoarding disorder, in particular, hoarding disorder/car.  If your husband says, "Gee, honey, let's buy an old school bus at auction and park it in the side yard!" you need to put your foot down, no matter how much of a "bargain" the price is.  Ditto for fire trucks and military trucks or whatever.  Some folks even collect old 18-wheelers or Greyhound buses - and then line them up on the lawn!  They rarely, if ever, drive them.  Eventually, they stop running and they slowly sink into the ground.

There is a demand for used school buses - in Mexico, where they are used for general transportation.  We see them all the time being driven from Virginia and Georgia down to Mexico, where they cross the boarder, paint them up nice and make them into local buses.

So why deny the Mexicans their basic transportation, just so you can let a bus rot in your side yard?

I am not sure what is going through the minds of the people who buy these things.  I guess the price is so low that "you can't afford not to buy it!" and maybe they have some vague plans of converting the bus into a motorhome - plans that never work out because they don't have the money (it is tied up in other disintegrating hardware) and the reason schools sell their old buses is that they are utterly clapped out.

Another phenomenon you see is the enormous boat parked in the yard of a home that is 50 miles from the nearest navigable waterway.   We are talking about 40' Chris-Crafts, rotting away in some farmer's yard.  The cost of just moving such a boat is staggering.  And yet I saw several during our tenure in Central New York.

Fire trucks are a special case.  One neighbor in New York had one, that he parked in a field and left there for decades.   Pray tell, why?

As I noted before, the hoarder does not treasure or take care of the things he hoards.  He often disassembles portions of these items and scatters the very hard-to-find parts to the four winds.  Then he lets the hulk rot in the yard, parked at an odd angle, sinking into the soil (as they always choose a damp area - a creek or swamp - to park these things in).   In no time at all, they are a mountain of rust.

A real collector would keep an antique fire truck in a garage or barn, waxed, polished, and ready to drive in next year's fourth of July parade.  The hoarder merely allows these things to waste.

What is the common denominator of all of these types of hoarding?   Bat-shit crazy.

And bat-shit crazy is why people end up poor, not "circumstance" or "lack of opportunity" or whatever.

Consider the graffiti "artist" - another example of bat-shit crazy.  All across the West, we see trains covered with graffiti, often in murals that must have used dozens of cans of spray paint and taken hours of their time.

You are young.  You are poor.  You are disadvantaged.  So what do you do?   Spend hours of your life painting murals on railcars that will disappear from your home town in a fortnight, never to be seen again?  Spending hundreds of dollars on spray paint (or risking jail by shoplifting it?).   How is this helping your own personal bottom line?

Short answer:  It isn't.   It is just squandering enormous amounts of energy and money - from people with limited resources of both - into an activity that will never, every pay off.

And no, please don't tell me about "graffiti artists" who make it big - like Banksy.  Because Banksy has yet to make dollar one on his stuff, as he mostly gives it away (assuming it is a he).

People like to complain they are disadvantaged in life - put upon by the GOP, the Democrats, or Obama or whatever.  They are victims of the economy.   They are victims of globalization.   Yet no one put a gun to their head and said, "fill your yard with thousands of dollars of government surplus vehicles and then let them rot away" or "quit school and spend your youth spray painting things."   It is a foolish waste of resources, and the people who engage in this tomfoolery have no one but themselves to blame for their woes.

Oh, and in both cases, the perpetrators of this nonsense create eyesores for the rest of us to tolerate -  bringing down property values and increasing crime rates (presence of graffiti tends to make people feel they can get away with crime - the broken window theory of police enforcement, which has been shown to work).

By the way, I mentioned before about government auction sites (and listed several).  My takeaway was that most of the stuff they auction off is in really bad shape and really overpriced.  I think people get carried away with these auctions and overbid on a blown-out police car with 398,000 miles on it and shredded seats and a broken tranny.   Just walk away from these bad bargains.

And if your friends ask you to go "tagging" (spay-painting buildings) with them, maybe think about going to the library instead and spending those two or three hours reading a good book.  It will be better for you, and for society.

And if you have a yard full of old vehicles, call the junk man and have them towed away.  You could net a couple of grand in scrap value.

But in either case, don't expect me to "feel sorry" for you as a put-upon downtrodden redneck or inner city youth.   No sale to bad goods.  And no, you don't deserve a government handout because you made poor decisions in life.

Poor choices - in every sense of the word.


UPDATE:  I forgot to mention SHIPPING CONTAINERS which many people in rural areas think are swell storage sheds.   Problem is, a used shipping container, sinking into your back yard at an odd angle basically devalues your property by thousands of dollars as it is an ugly eyesore.  It also is a crappy place to store things, as they get ungodly hot in the summer and most of them leak water (which is why they were sold off in the first place).  Just say "No" to used shipping containers as well.
Newer Post Older Post Home