The Tariff and Free Trade 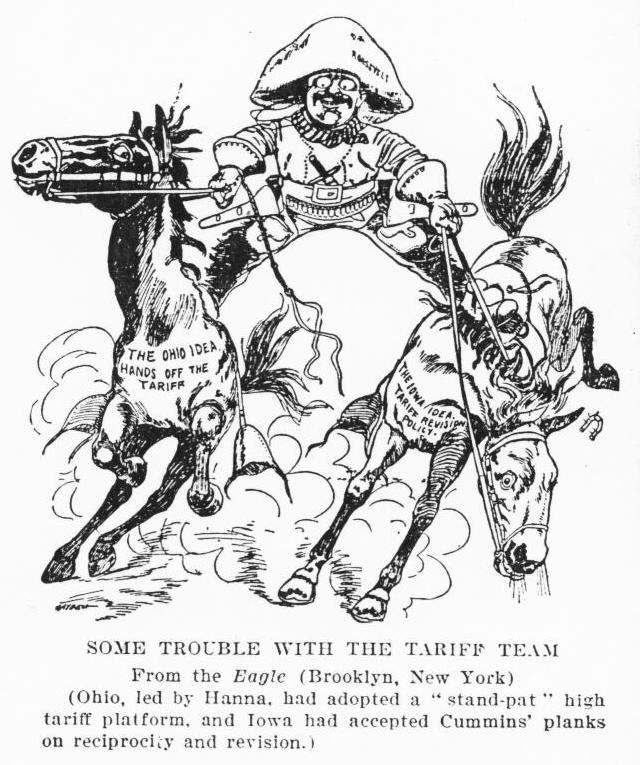 Both Teddy Roosevelt and Taft had to fight their own parties over the Tariff.  Today, it is Democrats who are against free trade.  What changed?

I have been reading some histories lately - Doris Kearns Goodwin's Bully Pulpit, James Bradley's Imperial Cruise, Gore Vidal's Lincoln and Empire and even Nicolay and Hay's volumnious biography of Lincoln.

One thing that crops up again and again in these books is The Tariff.  In order to be a good Republican 100 years ago, you were in favor of God, Country, and The Tariff.   High import tariffs were the policy of the United States for almost the first 200 years of its existence.  And it was a policy largely pushed by the Whigs and later the Republicans, who represented the industrial interests of the country.

In the early years of the Republic, American manufacturing was far behind that of Europe.  Protective tariffs were a way of evening the playing field and making American products appear cheaper to consumers.  The idea worked, and American industry took off.  Oddly enough, the Japanese did the same thing after World War II and we denounced them as "protectionist".

But until the 1980's protective and retaliatory tariffs were the norm in the US.  During the 1960's, the US got into a dispute with Germany over their tariffs on imported chickens.  In retaliation, we enacted the "chicken tax" which taxed small trucks 20% or more, which is why you don't see a lot of Volkswagen Transporter (pickup truck models) after 1965.

As I noted in a previous posting:

And this is not a new trend.   During the Taft administration, a "free trade agreement" was proposed between the US and Canada.   Conservative Republicans, who believed in "the Tariff" (more on that in another posting) tried to derail the treaty in the Senate.  It passed.   Frustrated, they spread rumors in Canada that this free trade agreement was the first part of a plan to "annex" Canada into the United States.   That was all it took to call for new elections and install a new government, which quickly kibosh-ed the proposed free trade deal.   If you want to hit a hot button with Canadians, it is their underlying fear of a US takeover.

But in the late 1970's and early 1980's as the US economy stagnated, the idea of protective tariffs started to fade and "free trade" became the new standard of the Republican Party.   Free trade agreements were signed with a number of countries, and the idea of free trade now dominates most economic thinking.

The idea is, tariffs tend to stifle economies.   When goods become so expensive, people stop buying.  And in many impoverished 3rd world countries, this is particularly true.  In most Central American countries, automobiles are slapped with a near 100% import duty.  As a result, they are very expensive and most people don't have one.   Of course, this has not helped create a domestic auto industry in places like Costa Rica or anything, it just means things cost a lot, and owning a car is an expensive pain-in-the-ass.

What some of these countries are also worried about is trade deficits.  If imports are freely allowed, then people will spend money on imported goods and wealth will leave the country.  Whether this is true or not, I don't know.  It is just one argument people raise.

In the early days of the Republic, Democrats were against the Tariff and for Free Trade.   The Tariff not only made imported goods expensive, it allowed domestic manufacturers to raise their prices as well.  Since Democrats represented the workers and farmers and other "little people" who had to pay the high prices for goods, they were against the Tariff.  Eliminating the Tariff, they argued, would make all goods cheaper and the average American wealthier as a result.

And there is some truth to this.  As I noted in an earlier posting on tire prices, the Obama Administration slapped a hefty "dumping" penalty on China for selling tires in the US at low prices.  Overnight, Chinese tires got very expensive.   And overnight, domestic manufacturers (including those owned by European companies) all raised their tire prices across the board.   Suddenly, I was paying $300 for one tire as opposed to an entire set.   Protective tariffs raise prices across the board, not just on the tariffed goods.

So now we have free trade, for the most part.  You'd think the Democrats would be happy now, right?  Well, one aspect of free trade is that everything it turns out, can be shipped across borders, including labor.   In a free trade market, labor is one commodity that can be traded freely.  And particularly with low-skill jobs, it is a lot cheaper to make things overseas, if there are no import Tariffs.

The high import tariffs were what allowed union workers at GM to demand raise after raise, under the threat of strike.  Once the foreign auto plants were established in the US (and the 20% "chicken tax" avoided), they no longer had this leverage.

So now the Democrats are against free trade because those foreigners "took our jobs".  But in reality, what is happening is that labor is now a commodity that can freely be imported and exported across national boundaries - in the form of consumer goods.

They took 'ur jobs!

But what about the Democrat's original argument?  That consumer goods would be cheaper as a result of free trade?  Well, I keep harping on this in this blog, but no one wants to listen.  We are a far wealthier country in real terms today than we were 30 years ago.   While many people complain about losing jobs or living "paycheck to paycheck" they say this over their new iPhone, with a yard full of internal combustion engine vehicles sitting outside.

Simply put, we have a lot more crap than we used to have in previous generations.   Kurt Vonnegut made a point of this in his novel Player Piano, where unemployed workers were told that they were richer than "the King of France" because after all, he never had a snowmobile.

And it is true - Napoleon dined off Aluminum flatware, as it was considered the rarest and most coveted metal on Earth.  Today, rednecks toss aluminum beer cans out of their aluminum pickup trucks and think nothing of it.

But it goes beyond changing values of minerals or new technologies.  We simply have more shit that previous generations.  We have more food, and most of it is prepared in restaurants - our new kitchens.   We are all grossly overweight and suffering from numerous medical maladies related to an overly-rich diet.   Even the poorest among us has a television, a phone, and usually a car.   And much of this is because all this stuff is so cheap.

In my parent's time, a television cost a month's salary or more.  Today, it costs less than a week's.   And having a second car was a sign of being upper-middle-class.  Today, the poorest hovel has three parked out in front (running) and another five inoperative in the back.

Simple things like barbecue grills or coolers, which cost $99 back in 1970 now cost....$99 in 2015.   With inflation, this represents a drop in prices by a factor of ten or more.   My Dad couldn't afford a Coleman cooler back in 1968.  Today, I have several such coolers, some given to me by friends.  We throw this shit away, today.

So is free trade a good thing or a bad thing?  Should we be all upset by the latest treaty being signed?

I think for the most part, free trade ends up being a good thing.  And over time, it will tend to even out.   And I say this because I see the cost of labor and prices from China and India and other "low cost" producers starting to rise.   People in these countries are starting to make money - a lot of it - and they are starting to demand more in pay.  When you already have money, it takes a lot more money to incentivize you to work.

We were just in Lake Louise and Japser, Alberta, and it was amazing to see how many Chinese people were there - affluent Chinese people.  One young couple brought their parents and grandparents on vacation.  And I had to marvel at the sight. Grandpa no doubt lived through the glorious revolution of 1949 as well as the Cultural Revolution.  He probably knows what it means to be hungry and perhaps nearly starve.   And yet, here he is, on vacation in Canada with his wealthy grandchildren, who are putting him up in the Fairmont Hotel.   How times have changed.

And good on him.   A wealthy China is a stable China.   We should be happy that these countries are thriving and doing well and establishing a solid middle-class.   Because they are learning that the international language of commerce isn't English, but Money and as a result, they are less likely to want to rock the boat.

Meanwhile, the USA has become a more attractive place to invest.  As I noted in an earlier posting, many overseas companies are investing in the US - building factories and making products.  Our labor rates have dropped to the level where they are now once again competitive on a world market.  So Nissan builds a plant in Mississippi because people will work there for $15.50 an hour.

And while that sounds like not a lot of money, bear in mind that $15.50 an hour will buy you more goods than it did back in 1980 when the labor rate at GM was about the same.  To folks who want to compare dollars to dollars, it looks like you are coming out behind.  But when you compare the cost of an air conditioner in 1980 to one today, you see your dollar is going a helluva lot further.

As our Asian friends demand more money and their economies grow, the cost of their goods will rise.  The sins of America will be visited upon them, as they discover labor troubles and high production costs.  Meanwhile, industry will expand in the US, until it it too, reaches the same point of stagnation, and the process repeats all over again.

The upshot is, of course, that in the process, we are all wealthier and better off than in a scenario of limited production, high wages, protectionist tariffs, and stagnated commerce.

Whatever the sins of Free Trade are, protectionism isn't the answer to anything.
Newer Post Older Post Home