The office of the 1960's was one giant human computer.

In a previous posting, I mentioned how things were so different back in the 1960's and 1970's that you can't really compare them to today and say whether they were better or worse.   Yes, some folks had the "three- martini lunch" but those were few and far between.

Most folks had to toe the line at work, swear loyalty to the company, and live in fear of being fired at any moment.   Watch old episodes of The Flintstones or The Jetsons or The Honeymooners.   In each episode, it seems, you hear, "Jetson, You're Fired!" or "Flintsone,  You're Fired!" or the boys are working up some cockamamie scheme to make it big.

Everyone back then lived in fear of the F-word.   You went to work for IBM, did your 30 years, got a gold watch and a pension, and never rocked the boat.   The idea of golden parachutes or dot-com startups was alien to us back then.

And if you kept your head down, did your job, you got paid.  Not a lot, but something. Enough to buy a 2-bedroom house in the suburbs (the kids could share a bedroom, naturally, and the four of you could share one bath - yes, this is how it was done).   And your wife could drive you to the train station every morning.  If you scrimped and saved, maybe you could buy a "second car" for the wife - such an extravagance. 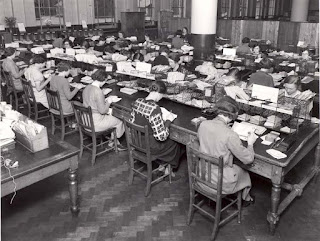 Women were limited to mindless clerical jobs - until they got married, at which point they'd be fired.

As a reader noted:

Drives me crazy when Millennials I know (or even some entitled X'ers, for that matter) who've watched way too many episodes of "Mad Men," start pining on about how better professional office jobs used to be.  Really?  Showed up late 15 minutes 'cause there was a line at the coffee shop?  Fired--and you're not allowed that coffee at your desk anyway.  Felt like showing up in jeans and running shoes?  Fired.  Sick days?  Fuggedaboutit.  Found out you cheated on your spouse?  Fired.  Tattoos and a nose ring?!  Yeah, right--yer ass is grass and we'll probably call the cops to boot!

I usually send them the attached pics and ask which office job they'd prefer.  It was before my time, but I'm well aware it was anything but a barrel of laughs.  Even when I started in the 90s, EVERY guy had to wear a tie at the office EVERY day.  The Doc Martins had to stay at home.

And as for the "cost of stuff and inflation" tears?  You're dead on.  A casual glance through a Sears catalog from the 60s-80s will not only tell you things were more expensive, but (adjusted for today's dollars) completely unfathomable.  It's a wonder that middle-class was able to stash anything at all for retirement.  ...But I guess they didn't spend all their money on crap and restaurants.

And that is all pretty much true.  In his biography On a Clear Day, You Can See General Motors, John Delorean recounts how much he was hassled - as Vice-President in charge of Chevrolet - for having long hair and wearing contemporary clothing.   Back in the day, at IBM, you would be sent home, like a naughty school child, if you had the gumption to show up for work in a brown suit.  It simply wasn't done.   And in a lot of places, taking off your suit jacket was not even allowed during working hours.

And if you were fired, well good luck getting another job.  Not only would being fired (or even quitting) be a black-ball to hiring, if you applied for a job, they would call your former employer, who would then trash your character without fear of legal recourse.

Losing your job back then could be a devastating life-altering experience.   People were paranoid about being fired or let go.   And as a result, people would often do odious things when ordered to, as they lived in fear of losing their jobs.  This, in short, is how "corporate malfeasance" occurs - when people are so worried about making their car payments or house payments that that go along with really bad ideas, like dumping toxic waste in the third world.

Ahhh... the 1960's!  Such a great time to be working.   And that's just for men.   For women, in addition to the discrimination were the outright sexual assaults.   Sleep with your boss, or get fired.  And if he gets you pregnant, well, you're fired anyway.  But no problem, he'll slip you 50 bucks for a back-alley abortion that will cause you to hemorrhage to death.  And everyone will shake their heads and wonder why you became such a slut.  That was the standard back then.

Gay?  Don't even mention the word.  Because not only would you be fired and blackballed from employment, you'd be chucked in a mental hospital and given electro-shock treatments, whether you wanted them or not.  Or, like my great uncle, you'd do "the honorable thing" to help erase the shame brought on the family and put a bullet through your head.   Sort of like self-inflicted honor killings.

Still want to go back in time?  Be my guest.  We didn't even talk about what it was like for black folks back then (The same newspaper from my previous article also advertises a "room for rent in a colored home" - in Connecticut in 1957!).

Now, compare this to my work experience at a semiconductor firm in Austin during the SXSW festival - a music and technology festival, if you can believe such a thing.   I showed up for three days of work, wearing blue jeans and cowboy shirts (and cowboy boots).  They gave me a conference room to work in - a glass cube that was cantilevered over the bar the company owned, right above the stage.  Three rock bands played each day, at 10:00, 1:00 and 4:00.   And no only was I not "sent home" but everyone else was largely dressed the same way.

Our generation won.   The way we work today is so dramatically different than in the past.   No longer are we tied to one employer by financial loyalty - in both directions.   Since we have portable 401(k) and IRA plans, we can jump ship and not lose tenure or "vesting" in some complicated (and underfunded) pension plan.   Want to quit?  Go ahead.   Start your own company.  Go work somewhere else.  I did.  You have options today - if you have talent and an education.   If you have neither, well, you have few options today - just as you had few options back then.

Perhaps that is why for someone of my generation, the present and future seem pretty decent.   While people protest "Black Lives Matter" and talk about trans-gender restrooms, it seems to me that we have indeed come a long way and opportunity today is greater than ever before.  The American Dream - of achieving a lot based on your talents and personal abilities is far more achievable today than it was in the past, even the recent past.   Not to say there isn't room for improvement, of course.

But this does mean, however, that achievement is still based on talent and ability.  That, and hard work.  We do not live in a world where everyone is paid the same regardless of their talents (or lack thereof) and how hard they work.   That has been tried before, and it simply doesn't work.   When everyone is paid as much as the laziest employee, everyone quickly tries to become the laziest employee.  It becomes a race to the bottom in short order.

A friend of mine is in law school right now, and he said he was appalled by how people are spending their student loan money.   Since they get a lump sum of money from the loan company to cover "living expenses" many go out and buy new cars, new cell phones, clothing, and other luxuries, and fail to budget for the entire semester.   Worse yet, they borrow more than they really need, and of course it all has to be paid back later on.

This is a condition today that we did not have in the past.   It is entirely possible to live a very nice middle-class or upper-middle-class lifestyle while still in school.   Investors are building "luxury" apartments near campuses, hoping to cash-in on this trend.   And kids raised in a middle-class environment naturally think they are entitled to the same standard of living in college as they had in high school.

In this regard, one thing my parents did that was helpful to me was that they were incredibly cheap and didn't let us have new cars (or even a car, unless we bought it ourselves) in high school.  Today, the typical suburban kid gets a car from Mom or Dad (or weekend Dad) as a graduation gift - or even before graduation.   Again, this is a social value entirely removed from the 1960's when often the family had one car.   My elder siblings received rusted-out "hand me down" cars to go off to college (sometimes not until their Junior year).  Starving us for cash maybe was a good thing, because I know when I was in college, I felt the part of the "starving student".  The idea of a "luxury apartment" never even occurred to me.

The world today is a different place.   Better in most ways, maybe worse in a few others.   Despite the problem of global warming, pollution problems have been severely reduced.  No longer do rivers catch fire from toxic chemicals.  Roadsides no longer look like unsanitary landfills (I kid you not - the roadside next to any Interstate in the 1960's was a solid wall of garbage back then.  Throwing shit out the window was just what you did).  We no longer smoke like chimneys - and live longer as a result.


Yes, people really did just throw shit out their car windows back then.

Yes, it is true that you can't go down to the Union hall and get a job on the assembly line because you Dad worked at DuMont Motors for 20 years.   And no, you can't blackmail the company into paying you three times the prevailing wage rates by threatening a strike.   But on the other hand, you are far less likely to be kneecapped by the Union rep.

There are still a few places today where you can make a lot of money - more than your qualifications entitle you to.   And these are largely in the government sector.  It is kind of ironic, but back in the 1960's and 1970's, everyone looked down on government jobs or teaching jobs, as they were low-paying jobs, albeit with good benefits and an assured modest pension.   Over the years, the benefits got better, people lived longer, and the pensions got - well, pretty cush.   And wages shot up like mad.   It has gotten to the point where a local high school guidance counselor can make more than a doctor or a lawyer.   And I am sure there a good guidance counselors out there who are worth six-figure salaries, I just haven't met one yet.

Of course, this may all change, and change very soon.   As one generation retires, the workforce may find itself in a shortage situation.   Already unemployment is very low, and in the recent past (1990's) there was actually a labor shortage.  It could happen again, and soon.   And as demand rises, wages may rise, too, which in turn will fuel inflation, which will decrease the wealth of the retired generation, resulting in a wealth-transfer from the old to the young.

But all that being said, if you have a worthless degree from Joke University and can't pass a urine test, life will be no better for you than for a high-school dropout in 1965 who was fired from his last job.   Life will always suck for the ne'er-do-wells.

One alternative is to not be a ne'er do well.   Radical concept, I know.  But life is less circumstance than choice.