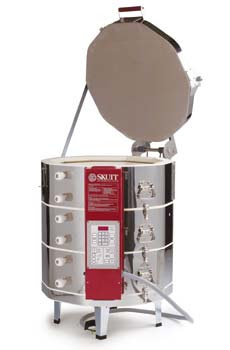 A kiln is, in a lot of ways, like a light bulb.  It lasts only so long before it burns out.

We just bought a new kiln - a Skutt 1027-3.   It is capable of cone 10, if you know what that means, which is fine as we are firing to cone 6.   That's the first thing you learn about kilns - you never buy a kiln that tops out at cone 6, if you plan on firing at cone 6 - it will barely make it to that temperature, and only after a long period of time, and the result is your glazes will all turn brown.

Cone, of course, is more than temperature, but a function of temperature and time.   Early kilns had no controls per se, but peepholes that you would look through to see the ceramics firing.  People put little pyramids of clay, known as cones, near the peephole, and when the cone bent over, you know you had reached the proper firing point.

Later kilns had a "kiln sitter" with a small device that resembled spring-loaded tines of a fork that would hold a cone.  When the cone bent, the tines moved and and shut off the power, allowing the kiln to power down.  These worked pretty well, too.

But electronic controls allow for greater control - you can ramp-up your temperature in stages and hold temperature for a period and then allow for gradual cool-down.   The problem is, of course, you have to experiment with different programs to work with different glazes.  And potters often keep their preferred programs - like their glaze mixes - as state secrets.   If you ask them, like any good chef being asked for a recipe - they will be sure to leave out key ingredients and steps.  You don't just give away your intellectual property when it is so hard-fought and hard-won!

But a kiln (and we are talking electric kilns here) is a remarkably simple device.  It is little more than a pile of bricks, some electrical coils, and a control box.   The very earliest kilns - wood fired - were literally a pile of bricks that were built up and pottery placed inside.  They would be fired for days and then disassembled and hopefully beautiful pottery would emerge.   Modern electric kilns are an arrangement, usually hexagonal, of fire brick held in place by stainless steel bands.  Over time, these fragile and frangible bricks crack or are damaged and eventually you have to repair or replace them.  You can use kiln wash and other products to try to seal the kiln and repair the bricks, but it is often an effort in vain.

The electrical coils go around the inside of the kiln in rows and are like the filament of a light bulb - each firing reduces the number of remaining firings left before you have to replace these elements.   This is particularly true if you are "high firing" at cone 6 and above.   The kiln will eventually burn out and you have to rewire it, which is a boring but not difficult task.

But speaking of burning out, even though the bands are made of stainless steel, these kilns do rust over time, particularly where the band clamps attach with spot welds.   So these things do have a finite life span, even if you can re-wire them with new elements and replace individual bricks and patch broken ones.

For this reason, used kilns are not worth a lot of money.  We've had about four so far - this new one will be our fifth and our first brand-new one with full electronic controls.  Our present kiln is rated for cone 6, but really won't make that temperature, so it is only good for bisquing.  It has an electronic control for ramping up heat, but no ramp-down like the new Skutt 1027-3 we are buying.

A used kiln can be a good deal for someone doing low-fire pottery and glazes.  Many low-fire glazes approach the quality of high-fire (but of course don't have the snob appeal).   And for folks painting plates and the like, a low-fire is just fine.   And older kiln that might not go to cone 6 anymore might have a lot of life left in it for low-fire uses.

But don't pay a lot of money for one.  A brand-new kiln, like the one shown above, is about $2200 to $2500 plus tax and shipping.   We are picking one up from Clay King on the way back to Georgia, and thus avoiding both tax and shipping.   Used kilns?  Worth maybe a couple of hundred at best - maybe $500 or so if they are nearly new or re-wired.

Our first kiln was given to us - actually two kilns, one being a small "test kiln" that ran on 110V.  Both were Kress kilns, and the larger ran on 220V and drew about 45 amps.   That is something to think about when buying a kiln - does your house have the juice to run it?  It is like adding an additional dryer, or hot water heater, or HVAC unit.   Some folks put a kiln in their garage and plug it into the dryer receptacle.  I guess that could work, but bear in mind these things get hot, and many garages have things like lawnmowers and gasoline cans in them.   Precautions need to be taken!

The Kress kiln worked fine - it had a kiln-sitter and Mark made some good pots with it.   We got a larger kiln from a friend for $300 as I recall, and it worked OK - it also had a kiln-sitter.  But it was in bad shape - a multi-piece unit that leaked like mad.  At night, you could see red light shine through the cracks between the kiln bricks.

The last kiln we bought, (Evenheat?) with the partial electronic control, we paid $450 for, which was a little too much.  The owner, who ran a pottery painting studio, told us it was little used.  But when we tried to fire it, it would not make temperature, and we ended up rewiring it with new coils.   It worked fine after that, but it was not really suited for high temperature (cone 6) glazes.  Mark used it for bisquing and low-fire glazes only, relying on the guild kilns for cone 6 firing.

Of course the problem with using guild kilns (even though it is free and the electricity is free) is that you may not have control over temperature programming.   What is a good firing regimen for one glaze may be horrible for yours - turning all your pottery into baby-puke brown.   Unless you are the "kiln-master" and in charge of programming, it can be like throwing dice.

Plus, when the rains come, the guild kilns get flooded and destroyed, so it seemed like a good time to get a really good Cone 6 kiln of our own.

But again, a kiln is like a light bulb - the more you use it, the faster it wears out.  You are not buying a piece of capital equipment, so much as like a set of tires, you are buying a roll of tape - and unwinding it with each use.   Each firing means one less firing left, before a rewiring job is needed, and each rewiring job is one less rewiring job left in the life of the kiln.   Eventually, you end up with a rusty collection of cracked firebrick, a flaky controller, and coils popping out of their tracks, and it is time to start over again.

And for that reason, one should never pay too much for a used kiln.

Or for that matter, a used anything.