ChrisCraft in a Cornfield - Carrying Cost Versus Sales Price 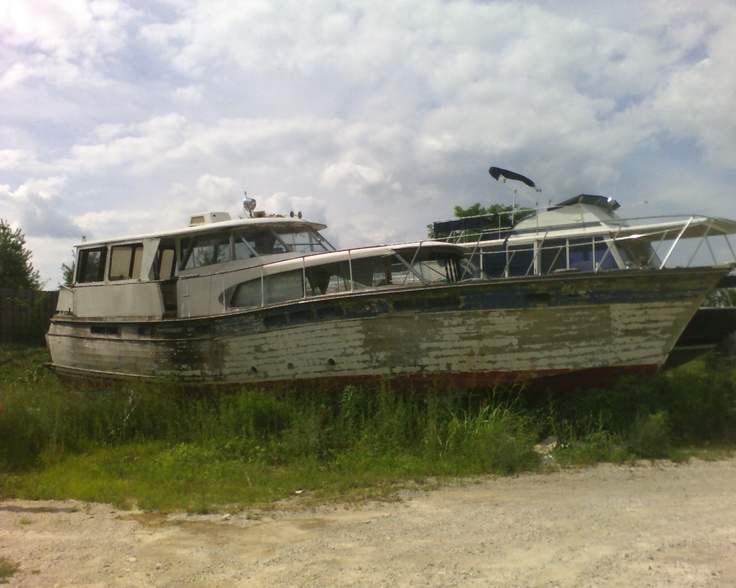 How does a boat end up miles from water, rotting in some farmer's cornfield?  Failing to take into consideration carrying costs is how.

When we lived in Central New York, we would drive by a huge Chris Craft - a 55-footer at least, made of wood, sitting miles from water on this guy's farm.  We wondered how it got there and why he dragged it home, only to let it rot apart in his yard.  Since then, in our travels, we've seen quite a few large boats - boats that require tractor-trailers and wide-load permits - in the side yards of rural impoverished farmers, looking like the remnants from Noah's flood or something.  How did they get there and why?

Our boat deal did not go through. Although it is end of the season and prices on boats are generally lower at this time of year, the owner wanted to "get his price".  Ironically, this means he'll have to pay $4,000 to store the boat through the spring in order to "get his price" - which ironically is $4,000 more than what we offered.

In other words, it would have been a wash for him, but he didn't see it that way. Since the price would have gone below the magic $40,000 mark, he would have felt he was "giving the boat away."

We were into the same situation selling our vacation home. People told us that if we kept the house on the market for two or three years we could get $460,000 for it.  We sold it in one week for $400,000. The carrying costs on the house were over $30,000 a year and thus we would have broken even - probably come out behind - if we waited two or three years to get a higher offer.  An offer which may not have materialized.

When we sold our last boat, we faced the same dilemma.  The annual storage costs were about $6,000. People on the Bayliner Owners Club website told me to put an outrageously high price on it because they felt their similar boats were worth a lot of money.  This is a very typical problem, and a psychological one,  which is been noted by others.  We tend to value things that we own higher than what we perceive other people's possessions to be worth. As result, we overvalue our own things and undervalue others'.

I lowered the price by $8,000 and sold it on eBay within 10 days. People said I sold the boat for too little, but I would have had to wait a year to sell it using conventional means and would have had to pay for the insurance and storage and overhead in the meantime.   I would have ended up breaking even at best, probably losing money in reality.

And unlike houses, things like boats, cars, and RVs depreciate every year and are worth less and less. The longer you hold on to it, the less it will be worth.  Maybe you'll find a better offer in a year, but then again the item will probably have depreciated by 5 to 10% or more during that time - perhaps even more.

As I wrote in my earlier posting, Constipated Commerce, this seems to be a particular problem in impoverished areas such as Central New York and in the North Country. We also saw it during our sojourn in Appalachia.  People offer things for sale, but put unrealistic prices on them so they never sell. People get indignant and say, "I'm going to get my price for this!" - as if somehow they are entitled to a price of their choosing.

They also believe, as I noted in my other posting It's Not Costing Me Anything, that there are no carrying costs to keeping something that is "paid for."  But as we have seen, depreciation does actually "cost you something" every year.  These are the people who finally get frustrated and just leave the faded "For Sale" sign in the front of the motorhome in the side yard and watch it slowly sink into the mud.  Eventually their widow sells it for scrap.

This goes back to the poverty of the spirit and the poverty mindset we discussed earlier. One thing I noticed when I moved to Washington DC was how quickly people bought and sold things like cars and houses, compared to my upbringing in rural upstate New York.  In central New York, people will think about buying a car for months or years and discuss it and haggle over it with the owner, who will also bide his time looking for the right buyer at the right price, before they finally reach an agreement - if they ever do.

I was shocked moving to Washington that people put their cars out for sale and put reasonable prices on them and made them go away. These are busy people who had better things to do than extract the last $250 out of an old Impala. They had good jobs, they had money, and they already had a new car and they didn't need the old one clogging up their driveway.

Again it is this mindset of poverty that you see in rural areas. People will spend tens of thousands of dollars to install an outdoor wood furnace in an elaborate hydronic heating system and then buy a pickup truck, chainsaw, and log splitter and spend all summer long felling trees and chopping them into firewood convinced they're saving tons of money on their utility bill.

Wealthier people just write a check to the utility company and figure they have better things to do with their time.  They also do the math and realize the cost of all this equipment and hardware far exceeds any minuscule savings in their heating bill over the winter.  They are looking at the big picture - their careers, their investments, their savings, not obsessing about saving on heating bills and moreover locking themselves into an elaborate heating system that requires them to never move for a decade or more to see any real savings.

Simply turning down your thermostat at notch or better insulating your house is often a better move. But again, people in poor regions set the thermostat at 80, on the logic that since they are getting all this "free heat" from their firewood they might as well live in a sauna.  Some of them don't bother insulate their houses and often you can actually see through the cracks of the shack with the $20,000 outdoor wood furnace parked next to it.

But once again, I digress.   Don't do what poor people do, and you won't be poor.   You needn't even analyze it - just avoid poverty behavior and you will avoid poverty.

Anyway, we've decided to move on with our boat search and perhaps look more Southward where people are a little more reasonable in their pricing.  And perhaps we'll look for a smaller boat - perhaps one with the diesel engine that would be more reliable and more cost-effective in terms of fuel economy, as we actually wish to travel and not just live at a marina, which many boters do.

It is an interesting phenomenon, and I have noted it before, that it many marinas, people simply come up for the weekend, wax their boat, sit on the stern, mix cocktails chat with her friends but never actually go out on the water. The boat becomes a floating condo or hotel room, albeit a very expensive one that is depreciating.

In the Thousand Islands area, it is very typical to put only 40 to 50 hours on the boat during the season - although granted, it is a short-season at that.  Some owners put as few as 20 hours on their boat every year which means they only take two or three trips in their boat of a few hours each and spend the rest of the time at the dock.

Weirder still, many boat owners end up buying a boat for their boat which is sort of like buying a cat for your dog.  Pets don't need pets and boats don't need boats, although a larger boat could make certainly make use of a dingy.  But I'm not talking about dingies, I'm talking about 18 to 24 foot center console fishing boats or small cuddy cabin cruisers.  The large boat owners who never leave the dock use these smaller boats to go to local bars and marinas and visit other people because the large boat is just too much of a hassle to untie and navigate.

We saw this phenomena and thought about it very carefully.  What's the point of having a boat if you're too afraid to actually use it as a boat?  You might as well buy a used houseboat with blown up engines and simply tied up to the dock and live on it and buy yourself an 18 foot Runabout to go to the bars and other attractions.

Again, people make irrational economic choices in life and then often complain about the outcomes.  We are staying in an RV park which also has a marina, this seems like a much cheaper alternative than to living on a boat. Several people here have Park Model RV's which I discussed before in my blog entries about Park Models. These are a lot cheaper to buy than a boat and a lot easier to maintain and you don't have to worry about them floating away or sinking.

At the marina accompanying the RV park, you can keep a small boat at the dock, the equivalent of the boat for the boat that the big boat owners have.  You can then visit all the local attractions here in the Thousand Islands without having some lumbering boat rotting away at the dock.

Who owns all these big boats?  Millionaires?  Investment bankers?  Hardly.  I noted before how the myth of the underpaid school teacher is well ingrained into our society.  But yet several people we met here were pensioners from the State of New York - retired New York State School teachers, who had homes in Florida and then spent the Summers here on their rather elaborate yachts, playing golf and enjoying themselves. They hardly appeared to be starving or underpaid.  One actually bragged to me that there were more retired teachers in New York than working ones.  And you understand why I had to sell my vacation home and why taxes here are out of sight (along with everything else!).

But of course the NEA has us all brainwashed that teachers are all living at the poverty line and using food stamps to get by. Maybe this is true in Arkansas and Alabama, but certainly not in New York State.