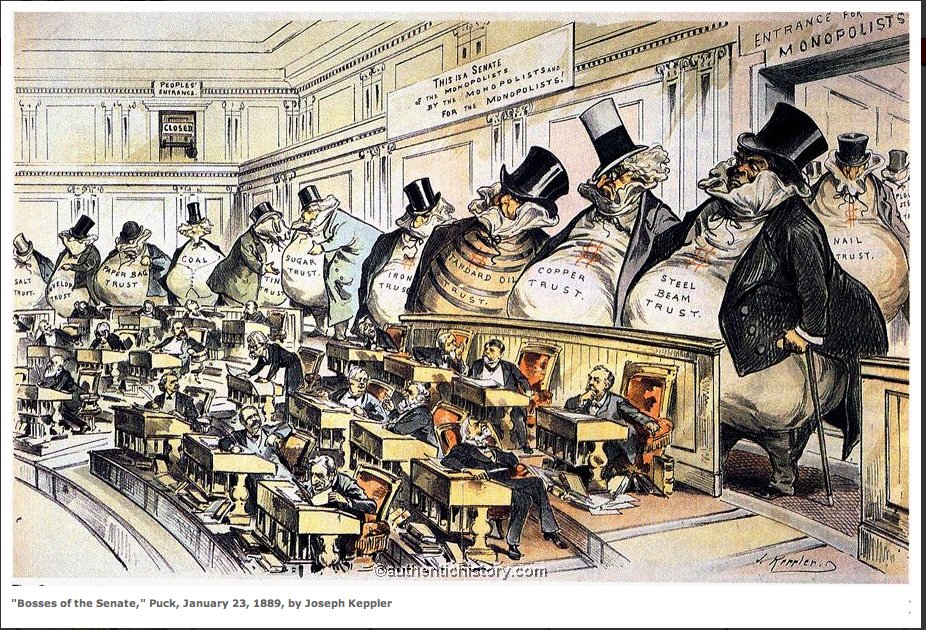 The age of the robber barons has come and gone - and come again?

I was reading an article recently about aircraft leasing.  In case you missed the recent news, there is a huge controversy between Airbus and Boeing for control of the commercial airliner market.  And upstarts like Bombardier and Embraer are edging into their market space. A recent decision by the International Trade Commission, which I discussed in a previous posting, could impose 200% duties on imported Bombardier aircraft which could result in a trade war which will bring down our economy.

But that's not the point of this posting. They were interviewing the head of one of the largest aircraft leasing companies in the world, and talking with the CEO of the company, Mr. Steven Udvar-Hazy.  If you are aircraft fanatic, the name rings a bell, as it is the name of the Smithsonian's aircraft museum at Dulles airport, the Udvar-Hazy annex. Clearly, this is a guy who loves airplanes and has a shitload of money. (Good for him!).

And it struck me that we are living again in the Gilded Age much as we did in the late eighteen hundreds and early nineteen-hundreds where a few powerful people control much of the country's industries or indeed, the world's wealth.

I live on Jekyll Island, which is now a State Park open to anyone in the public.  But in our historic district are the remains of the Jekyll Island Club, which was once the exclusive resort of the world's wealthiest people. In the late eighteen-hundreds and early nineteen-hundreds, while at club was in session from December through March, one-sixth of the world's wealth was represented there.

South of us is Cumberland Island which was settled by the descendants of the Carnegies, who made their money from their Uncle who controlled the steel business in its entirety.  In that era, Rockefeller controlled the oil, JP Morgan controlled the banks, and other famous names controlled every aspect of our nation's economy

Back then they called them Trusts. There were oil trusts, railroad trusts, steel trusts and every other nature of trust. They locked up the economy and controlled huge portions of it. They prevented newcomers from entering the business and they pushed out marginal players by either crushing them through unfair competition or by simply buying them out.

Today, you can go visit the fancy and expensive mansions and homes of the people who ran these trusts. In addition to the historic district of Jekyll Island, you can travel up the Hudson and see the Mansions of the Rockefellers and the Vanderbilts, or perhaps venture to Newport, Rhode Island to see more of the same  The era of the Trusts came and went, and these mega-wealthy titans of industry eventually lost their influence.  The question is, why?  And the question is do we have similar pultocrats with us today?

What led to the demise of the Trusts and the mega-wealth of the turn of the century is an interesting question, and there are many answers. Some trace the demise of the mega-wealthy to the imposition of the income tax at the start of World War  I.  Before that time, you could earn as much money you wanted to, and largely avoid paying any taxes. The government funded most of its programs through import tariffs and other sorts of taxes, but income itself was not taxed (Sounds like Trump's new tax and tariff  plan, no?). This allowed people to accumulate vast amounts of wealth and pass it on from generation to generation.

By the end of World War II, many of these wealthy people had dissipated their wealth.  As I noted before, wealth tends to dissipate with each successive generation as an increasing number of children, grandchildren, and great-grandchildren divide up the pie and then fritter it away. After World War II, Mark's father bought a mansion in Westchester County and operated it as a retirement home.  He was able to buy the property for very little money because nobody could afford to keep up such a place, and the wealthy people who built it basically abandoned it.

Income taxes in the post-war era had marginal rates over 50% - as high as 70% in some cases.  And we talk about today's rates as though they were onerous.   Oddly enough, it was a Democrat, John F. Kennedy, who proposed the first cuts in marginal rates, and since then, the GOP has taken up tax cuts under its banner.   The problem is, of course, you can only cut taxes so much before government runs out of money, as they are finding out in Kansas.   Kansas instituted a tax program that allowed people with Subchapter-S companies to basically avoid paying income taxes.  Needless to say, even the paper boy in Kansas now has a Subchapter-S company (they are not hard to form - we had three at one time).  When government creates incentives, people jump through hoops.  But I digress...

Today, a wealthy investment banker who works on Wall Street now owns the estate that Mark's Dad bought for cheap after the war, and it is once again the property of the well-to-do. It seems we have come full circle.  While income taxes for the very rich are at all-time lows (and the very rich pay capital gains taxes, not income taxes per se), property taxes are still very steep.   But for folks making hundreds of thousands a year (or indeed, even millions), a five-figure property tax bill is merely part of the cost of doing business.

Similarly, the small town of Cazenovia New York, where I grew up, was once a vacation resort for the very wealthy from New York and Boston.  Massive estates lined the lake, and captains of industry and their families would Summer there with their retinue of servants, the latter of which actually settled the village.

By the 1960s and 1970s, the very rich had left, and their servants were now living in many of these Mansions. I recall a friend of mine whose parents were devout Irish Catholics and descended from the servants of the very wealthy, now living in one of these Mansions. They had 12 children and everyone had their own bedroom. We would skateboard in the ballroom and play pool there.  No one could afford to keep up these places much less pay the utility bills.  It was very cold in their house in the winter!

Again, today, these mansions are once again owned by the very wealthy, and although they have sold off many adjacent lots to reduce their tax burden, they are once again being restored to their former glory. We have, in a way, returned to the Gilded Age where the very wealthy are separated from the rest of us by a huge gap in income and wealth.

In the 1800's and the early 1900's we knew all the names of these plutocrats. The Rockefellers, the Carnegies, JP Morgan, and others. These were people who had manipulated markets to make themselves wealthy, or famous inventors or industrialists such as Edison or Ford who made their fortunes in industry.

Today, there are a different group of plutoctats with different names. Names like Gates, Bezos, Zuckerberg, or Musk.  Or there are mega-investors like Mark Cuban or Warren Buffet.  Of course, today most of these plutocrats are keen to hide their identity, behind investment capital firms and other corporate shells.  Just as the members of the Jekyll Island Club loved to come to this remote resort to live in "splendid isolation",  many of today's plutocrats like to keep a low profile, for the most part, to prevent the sort of resentment that drove their spiritual ancestors out of business.

We know many of these new plutocrats by the names of their venture capital firms, who take companies private and load them up with debt. Or we know them as "activist investors" who buy chunks of stock, garner a seat on the board, and then force companies to make quick profits, often by dividing them up into small chunks which are sold off to other venture capitalists.

But in addition to the income tax, as well as property taxes, there were other factors that curbed the excesses of the Trusts and the plutocrats of the previous era.  Trust-busting and reformist politics became the rage in the early teens and twenties. Teddy Roosevelt, who some cite is a spiritual predecessor of Donald Trump, was keen on breaking up the Trusts and distributing wealth more evenly among Americans.

Antitrust laws were enacted which broke up many of the monopolies that were dominating American industry. The most notorious of these was Rockefeller's Standard Oil which is broken up into a number of regional companies such Socony, Esso, Mobilgas, and so on. Ironically, Standard Oil has has been recombined today as Exxon-Mobil. Similarly, the Bell Telephone Company was broken up into the "Baby Bells" but today is re-consolidated as AT&T.  IBM fought antitrust laws for years, until it finally became irrelevant in the computer market.

It seems that over the years, we've come to accept that monopolies are part of life or at least fail to realize the impact they have on society.

Of course, today, one wonders how antitrust law could be applied to modern technologies and companies. Should Facebook be broken up into five separate entities? Would that even work online? Cable companies and wireless companies are forever combining and dividing and going through the motions of appeasing the justice department and antitrust regulations. Of course each new level of technology obsoletes the previous one. Who cares if the cable companies are combined, when we are all watching television online?

Of course not everything is a perfect parallel of the past.  Donald Trump is no Teddy Roosevelt, and he seems more inclined to protect the interests of the plutocrats than to bust up the modern Trusts of today's society. The Republican party today seems more interested in cutting the taxes of the very rich rather than equalizing wealth as it did under Teddy Roosevelt.  Of course, Roosevelt was succeeded by William Howard Taft, who reversed many of his initiatives, much to Roosevelt's dismay.

And today, maybe we are seeing the same thing in the Republican party - a division between the old-line Republicans and the Trump supporters who voted for Trump thinking he would help out "the forgotten man" by giving tax cuts to the very wealthy.  Funny how people can be fooled so easily.
Newer Post Older Post Home