Bitcoin And The Railroad Bubble 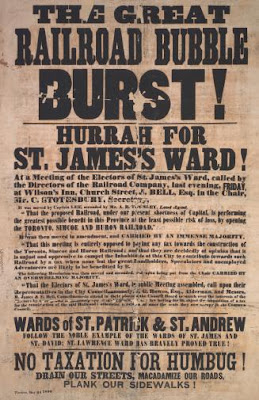 Bubbles occur when people think that something is valuable and therefor that anything related to it is valuable as well.  Some railroads were quite profitable back in the late 1800's, but that didn't mean that all railroads were equally as profitable or valuable.   When the bubble burst, it took down all railroad stocks.  The same thing can happen to Bitcoin, not because Bitcoin is worthless, but only that it is over-valued and the johnny-come-lately currencies are bidding up the market.  The housing market worked the same way - not all houses were worthless, but some were worth less.

The recent surge in the price of Bitcoin and its subsequent drop reminds me a lot of the railroad bubble of the late 1800's. In case you don't remember it, in the mid to late 1800's, railroads took over from canals and wagons as the primary means of transportation of goods and people in the United States. This allowed vast tracts of land in the West to be opened up for development, as farmers could grow crops and then ship them to the major cities.

Of course, the system was not without its problems. The railroads quickly realized the farmers were dependent on them for their livelihood, and they could charge whatever freight rates they wanted, and screw the farmers out of every last penny of their profits. A crop that doesn't get to the market is like having no crop at all. As a result, we established regulations in this country to regulate freight rates and prevent price gouging.

But by the late 1800s, railroads became wildly profitable, and many people clamored to invest in them. The logic was that if one railroad was profitable than all railroads must be profitable. Suddenly, many new railroads were springing up, often times building rail lines costing millions of dollars that went from nowhere to nowhere. As it turned out, a railroad has to have a purpose and a steady stream of customers in order to be profitable.

And as we found out a decade or so later, the vanted prophets in the railroads could rapidly evaporate if government stepped in to regulate them. Suddenly, a wild profit turns into a mild profit when railroads became regulated carriers.

In the case of Bitcoin and other cryptocurrencies, both effects are now taking place. First, we are seeing that people are wildly investing in cryptocurrencies other than Bitcoin, thinking that Bitcoin is wildly profitable and therefore other cryptocurrencies will be wildly profitable too. They are thinking emotionally and not logically, assuming the getting in on the "ground floor" of a worthless cryptocurrency will make them billionaires. This is akin to the same logic of people buying stocks in railroads that went from nowhere to nowhere and quickly went bankrupt and left them with nothing.

Then there is the issue of government regulation. People like to say that cryptocurrencies are immune from government regulation as they are in the ether of the internet and can't be tracked or traced. However, as I have noted time and time again, you cannot spend these cryptocurrencies directly, but have to convert them into local currencies first. People make a big deal about saying such and such a company "accepts Bitcoin" but  what they are usually doing in reality is merely converting the Bitcoin to dollars or other local currency and then applying it to the purchase price of the goods or services.

Thus, Bitcoin and other cryptocurrencies quickly become worthless if they cannot be converted into dollars,yen, yuan, pesos, British Sterling or euros. And as the Chinese have recently demonstrated, they can outlaw currency exchanges very easily and thus prevent the use of cryptocurrencies - decreasing their inherent value.

I noted the time and time again the only real logical reason for using a crypto-currency is to do something illegal. Cryptocurrencies are useful if you are in the business of buying and selling drugs, weapons, or children. They really have no legitimate use and there really is no cost savings and using them as the fees extracted by the exchanges are often  on a par with those of Visa and MasterCard. The only reason for using a cryptocurrency is to avoid detection by government agencies.

And government agencies can figure this out. Why Bitcoin is allowed in the United States, or more precisely why Bitcoin exchanges are allowed to be used in United States, is a good question. I suspect, the federal government has a reason for allowing the use of Bitcoin at present time, but once that reason evaporates they may decide to outlaw Bitcoin exchanges as well. I could see a very good RICO case could be made that could be made since Bitcoin is largely used for a illegitimate transactions.

Once it becomes harder and harder to exchange your Bitcoins for local currencies the value of Bitcoins will correspondingly plummet. Unless Bitcoins can be regulated and controlled, most governments will shy away from allowing them to be exchanged for their local currencies. And if Bitcoins are regulated and controlled, then the primary reason for using them - illegal transactions - will disappear.

At that point, cryptocurrency could become one of those things we'll talk about in the future, as in, "you remember that whole cryptocurrency fad back in the 2010s?" Unless cryptocurrency can adopt a legitimate use, its future doesn't seem very certain.
Newer Post Older Post Home