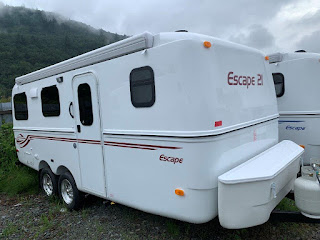 The RV industry, like the boat industry, is often a miner's canary for recession.  Our new RV awaits delivery.


When the shit hits the fan, people stop spending money on unnecessary things.   They cut back on restaurant meals.  They shop around for cheaper groceries.  They stop driving so fast - or so much - which drives down the price of gas.   People do a lot of things to trim the sails of their personal finances.   But the first thing to hit the chopping block are big-ticket toys that cost a lot of money to buy and own.

We drove by Elkhart, Indiana on the way to Michigan, but didn't stop by this time.   It is the Detroit of the RV business, as much as Detroit used to be the Detroit of cars.   But RV sales are down this year - substantially - according to an article in Reuters.   And part of this is due to tariffs, which are driving up the cost of components.   It isn't steel and aluminum tariffs that are to blame - indeed, most RVs are made of sticks and staples, luan plywood, and a thin fiberglass veneer - but the components within the RV are often made in China.

Most RVs have a hot water heater, a furnace, an air conditioner, a sink, a stove (or cooktop), a microwave, a 12V power supply, a water pump, water tank, black and grey-water tanks, awning, leveling jacks, and so on and so forth.   Most of these components are made by one of a few manufacturers - Dometic (Electrolux), Suburban, A&E, Carefree, Magic Chef, etc.  And increasingly, these companies make or assemble these components in China, where labor is cheap.  So when Trump slaps a tariff on Chinese imports, it results in huge price increases for these components.   The steel and aluminum tariffs are just another part of it.

As a result, manufacturers have to raise prices.  They cannot absorb 25% tariffs when profit margins are slim as it is.   When a recession strikes and sales are down, many marginal players exit the market, as we saw in 2008, when even some big names (including the biggest at the time, Fleetwood) either retracted, reorganized or disappeared entirely.   When the market booms, as it has in the last five years or so, every Bubba who has a screwgun and a compressor, who can rent warehouse space in Elkhart county, will start up an RV manufacturing business.   Overproduction results, and price wars start.   Inventories at dealers start to bloat.

Compounding this problem is what Bill Ford identified as a problem for the car industry - funny-money loans.   Mr. Ford opined - nearly a decade ago - that 7-year car loans were locking buyers into cars for longer periods of time.   While they might "move iron" off the lot in the short-term, this means the traditional buy-and-trade buyer who bought a new car every 3-5 years, has to wait a few years longer, as he is upside-down on his loan.   The dealer can fold the negative equity into a new loan, of course, but this makes it even harder to trade further down the road.  A few cycles like this, and the buyer ends up in financial trouble, perhaps bankrupt.   Again, the problem with debt is that it can take a decade or more for these sort of harms to materialize, and in the interim, you think everything is going just fine, until "suddenly" you are in a financial pickle.  I know this, firsthand.

Toys are very price-sensitive items, and people will only buy them if they feel they can afford them.  For most Americans, this means whether they feel they can afford the monthly payment (never mind the overall cost, which can bankrupt them).   Joe Paycheck has $199 left over every month, now that he has the Harley paid off.  So when the flyer from Camping World arrives, saying a new trailer can be had for $199 (and his tax refund makes the down payment) he buys.   When the price goes up to $250, and his tax refund is a lot smaller this year, maybe he decides to wait.

The problem is, if he decides to wait, that means one guy in Elkhart isn't working overtime, or in fact, may be laid-off.   And that guy doesn't buy the widgets that they make at Joe Paycheck's factory.   Of course, a lot of this was inevitable - part of the business cycle.   People go into debt to buy cars, houses, computers, phones, boats, RVs or whatever, and then over-extend themselves and have to pull back.   Everybody bought a 1957 Fairlane.   No one bought a 1958 Edsel.   Overnight, the car business cratered, because people were already stressed out with car payments.   Recession ensued.

But like clockwork, a few years later, people were back in the showrooms, ready to buy newer cars with fancier features and more modern styling - and wanting to unload their wildly unfashionable 1957 Furies and DeSotos.   The same will happen to us, in the very near future.   And there will be much tearing of hair and rending of garments, and predictions that this time, for sure, capitalism is going to fail once and for all.