Two Drunks Holding Each Other Up 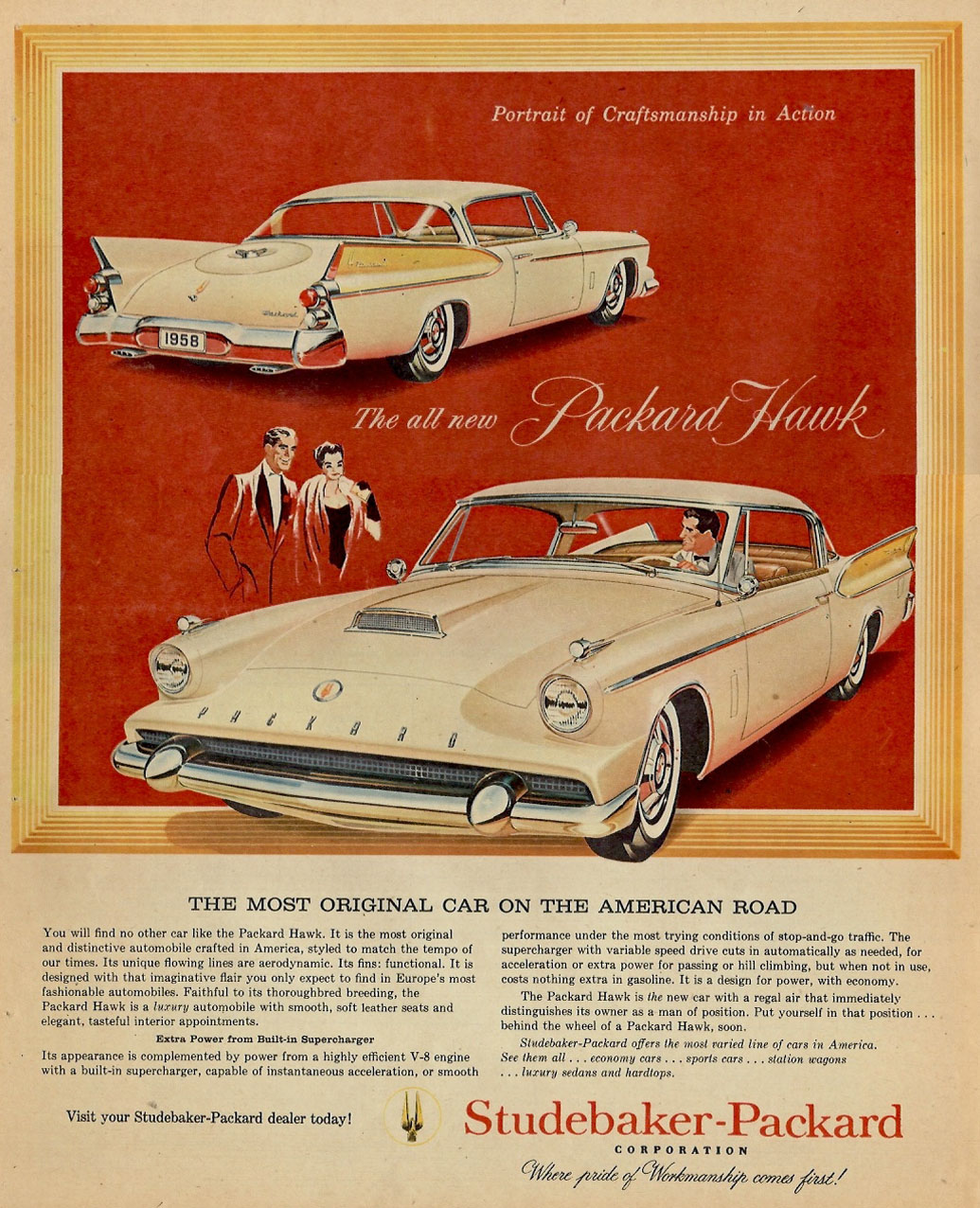 When Studebaker and Packard merged in the late 1950's, people said it was like "two drunks holding each other up"  -  could the same be true for Peugeot and Fiat-Chrysler?


A reader asks me what I thought of the merger between Peugeot (PSA) and Fiat-Chrysler (FCA), and I repeated the mantra about Studebaker and Packard.  When the two ailing companies merged in the late 1950's, Packard had lost its way, and Studebaker was hemorrhaging cash.  Within a few years, the Packard name was gone (the last Packards, shown above, were merely re-badged Studebakers), and Studebaker hung on for a few more years until they too, cashed it in, in the mid-1960's.

What killed Studebaker and Packard?  Was it the "Big-3" trying to run them out of business?  Hardly.   The cost of R&D, not to mention just tooling up new models, was just too much for either company, alone or together.  In an era where car companies were introducing new models annually, and newer and more modern engines were appearing, Studebaker was still flogging chassis designs from before the war, and even old flathead engines.  The coming of emissions controls and auto safety standards would have surely sunk them, which is likely why the Board of Directors decided to cash it in, in later years.

Of course, it didn't help Studebaker any that their "generations of craftsmen" were a bunch of slackers willing to strike at the drop of a hat.   And no, painting the factory walls different colors didn't quite do the trick.  Makes about as much sense as the five foot high machine rule.

That, in short, is why I get a laugh out of people who believe that stupid "Tucker" movie or think the "Elio" three-wheeled car had a real shot at production.  There was no "big conspiracy" against Tucker, only reality.  After the war, Henry J, Kaiser, who was backed by millions of dollars of war profits and his existing shipbuilding, aluminum and steel industries, was unable to make a go of a "new" car company and himself had to fold his tent after a few years, exiting the auto business in 1955 and concentrating on the Jeep line.  He eventually sold even that, to American Motors.  Tucker?  He didn't stand a chance - not if Henry J. couldn't make it.

The merger of PSA and FCA will knock General Motors from the fourth largest auto manufacturer to the fifth.  You read that right - GM is no longer one of the "big 3" automakers, at least not worldwide.  How much longer the "big 3" remain big in the US remains to be seen.  GM has been shedding divisions over the years - selling its European operations to PSA only a year or so back.  Time was, we had assembly plants on every continent except Antarctica. Hell, we were even assembling "knock down" kits in Tehran.   Those were heady days.

The "Big 3" are now Volkswagen, Toyota, and Hyundai!

It is interesting to see that GM and Ford are neck-and-neck in sales, whereas historically this wasn't true.  "Back in the Day" GM had over 50% market share, with Ford coming in a distant second at about 30%.  This interactive graphic illustrates how GM went from 50% in 1961 to 17% today, while Ford went from 30% to about 14% - keeping abreast of GM.   And yet analysts are agog over GM stock and punish Ford.  Both have lost a lot of market share, but GM has lost so much more.

Of course, profits are what matters, and chasing market share over profits is short-sighted.  When I was at GMI, they told us we could sell a million cars and make $1 each, or sell one car and make a million dollars on it - the net result was the same.   Chasing market share at the expense of profits is pointless.  And yet VW has vowed to become the world's largest automaker by volume (and has succeeded, apparently) but is largely no better off for having done so.  GM, Ford, and Fiat-Chrysler are going after smaller shares, but perhaps better profitability.   Of course, their market share strategy might not be a choice.

But what does this mean for Fiat-Chrysler-Peugeot?  Well, the former (and late) head of Fiat-Chrysler had been shopping the company for some time now - even trying to get GM to buy it.   He realized - as most auto executives do - that there is horrendous overcapacity in the worldwide auto business, something that the next recession will highlight.  Not only that, the Chinese and Indians are getting into the field, adding more players in an era where the market will not absorb the capacity already in place.

Add to this the staggering cost of new technologies.  Not only are electric cars and self-driving cars going to be expensive to develop, just developing new models of existing technology is becoming more and more prohibitive.  Cars with small sales numbers, like sports cars and roadsters, often cannot justify their development costs, which is why we see BMW and Toyota, and Toyota and Subaru joining forces to develop and build these low-volume cars.   But again, even something as high-volume as pickup truck transmissions is apparently too much for even GM and Ford to do alone.   Expect to see more of this technology sharing going forward - it has been going on for some time now, already.

The problem for FCA is that they make money on their RAM pickup trucks and Jeep vehicles in the USA.  But sales of Fiats and Alfas are money-losers here, and indeed, apparently even lose money in Europe.   PSA was profitable, but the plants inherited from GM are giving it fits - and Brexit certainly ain't helping much.  In Europe, in order to close a factory that is unprofitable, you need permission from the local governments, the unions, an even customer groups - none of which have an incentive to say "yes".  Nevertheless, PSA has no choice but to close plants - with all the production capacity inherited from GM, it has many factories running at a loss.  Expect to see a lot of labor strife over this - strikes and whatnot - as union members believe that factories should be run, even at a loss, to provide jobs.  Expect riots.  Oh, wait, yellow vests.

Perhaps FCA and PSA are not quite "two drunks holding each other up" - at least not just yet.  But they are not on the strongest financial footing of the major carmakers.  PSA's plans to bring back the Peugeot brand to the USA are laughable - hopefully after the merger, they will come to their senses.  Sadly, Americans don't have fond memories about the reliability and affordability of Fiat, Alfa, or Peugeot brands.  Already the Fiat brand is in trouble in the US - the "500" being a sales nightmare after an initial rush (due mostly to piggybacking off the BMW "mini" sales - another car that is an overpriced piece of shit*).   The Mazda-made Fiat "Spider" isn't a bad looking car, but sales have been infinitesimal, as have Alfa sales.   Good luck going into that maelstrom, Peugeot!

The merger of PSA and FSA isn't a sign of strength, but of weakness - an admission that neither company has what it takes to go it alone.   It could work out for the combined company if they aggressively close money-losing plants and pour money into R&D of new products (and abandon ideas about bringing "dirty halo" European brands to the already-crowded US market).  They don't have much time to do this, however, as the next recession could push them into the "Two Drunks" territory.

UPDATE:  We live near the second largest auto import port on the East coast.   You may have heard about our little tipped over boat problem.  We are used to seeing acres of cars as they come off the Ro-Ro's or are marshalled to be shipped overseas (BMWs, Mercedes, Hyundais, KIAs, etc. are exported, along with construction equipment).   But we don't see a lot of Dodge trucks or Jeeps around.   Where we store the camper, they built a new storage yard that covers acres and acres of land - filled to the brim with Dodge Ram pickups and Jeeps.  Jeeps?  I thought those sold so fast they couldn't keep them in stock!

Turns out, there is a reason why all these trucks are sitting in Brunswick, GA by Exit 29:  Fiat-Chrysler overbuilt at least 40,000-70,000 vehicles using a computer program that created a "sales bank" of unordered cars.   Dealers are now being given incentives to move these cars off the lot.  My own theory is that they did this in anticipation of a UAW strike.   Or, it was to gin up the production numbers when negotiating the deal with PSA.  Either way, this is not the sign of a healthy company or a healthy sales economy.  Car sales are declining, as people run out of money to borrow.

* We looked at the various models of the BMW "mini" before we bought the hamster, because Mark thought the mini was "cute".  My head touched the ceiling.  And the cars themselves were staggeringly expensive.  For less than the cost of a used mid-level mini, we bought a fully-loaded hamster with heated and air conditioned nappa leather seats and an infiniti sound system and panoramic sunroof.  It is a much larger car, too - about as wide as a pickup truck (think: AMC Pacer).   In terms of quality and value, it blows the mini out the door.   Meanwhile, the mini, combining the worst aspects of BMW ownership (high cost of repairs and parts) with "old world craftsmanship" from jollye olde Englande (when they are not out on strike).   There is a reason why Hyundai is #3 on the list above.  What is really amazing, is that they didn't start making cars until the 1980's.  It shows it can be done, if you keep your eye on the ball.  I sold my BMW stock, by the way.
Newer Post Older Post Home