Turn the Water Off When You Go On Vacation 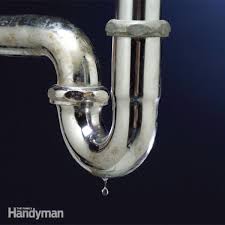 If you leave the water on when you go on vacation, you might come home to a nasty surprise.


Indoor plumbing is a marvelous invention - bringing water right into your home!  And draining away waste as well!   Certainly is swell to live in a Western country in the 21st century.  Yes, there are still a lot of places in the world where washing in a sink or flushing a toilet is a rare luxury.

Problem is, of course, plumbing leaks.   I don't care if you have copper, cast iron, lead, PVC, CPVC, Pex, or whatever, there is always the possibility of leaks in any plumbing system, and in fact, most leak.   Often, the amount of leakage is so small that the water evaporates (even in a humid climate) before you notice it.  I imagine in Arizona, you could have some whopper leaks and they would just show up as hard water stains.

Valves and joints are prime areas for leakage.  In recent years, we've moved away from the old-fashioned stem-and-packing valves to these O-ring deals which supposedly never leak.  But they do.  Even if your plumbing is "tight" there is always the possibility of water washing over the edge of your sink, wicking through the base of the faucet, and dripping down into the vanity cabinet below.   Since you've wedged this full of spare soap and toilet paper, you don't notice the drip...drip...drip until years later, when you clean the cabinet out and see all the stains, mildew, and - let's hope not - mold.

Kitchen sinks are probably the worst - they get used the most and a lot of water is splashed around when washing dishes.  Some of this can leak under the sink, through the fixture holes, or even drip down the face of the cabinet.  Dish washer connections are often plastic and fragile - and coupled to disposal which may crack itself.   There is a lot of plumbing under there, particularly if you have a double sink.

I've owned nine houses over the years.  all of them had leaks in the plumbing, from mild to wild.   Some were just initial drips after a new sink was installed, that tended to "seal themselves" (again, because of hard water) over time.  The worst are burst pipes or hot water heaters, which have the potential to flood your house.

How to avoid these problems?   There are steps you can take.

Drip Pans:   Under each sink vanity, put a large plastic pan - large enough to catch any drips from the faucet, the shutoff valves, and the sink itself.   Inspect these regularly for water.   I put a paper towel in them so I can easily spot any drips.

Most vanity cabinets under bathroom sinks or kitchens are made of pressboard.  When this stuff gets wet, it gets nasty in a real hurry - puffing up and looking like hell.  The only real way to fix it is to replace the vanity which often opens up a whole new can of worms, involving replacing counertops, tile, flooring, plumbing and whatnot.  The longer you can delay this, the better off you are. A drip pan can save your vanity and alert you to a potential leak.

This company makes pans that fit your vanity or kitchen sink cabinet.  I haven't tried them, but it seems like a good idea to me.   Cheap dollar store pans (for a dollar!) made of aluminum also might work and cost a lot less.  Old kitty litter pans, or old storage bins (the clear kind) work well, too.  As the "driptite" site notes, cheap melamine cabinets (the norm these days) are easily damaged by even the slightest water leak - even a drip, over time, can ruin a cabinet.

UPDATE:  My cabinets are 21" deep on the inside, and their drip pan is stated as going from 22-24".  Bummer.   I have contacted them and asked about custom sizes or how far the pans can be cut down.  Seems like an interesting product, and a way of "repairing" water-damaged cabinets.

Things like hot water heaters and washing machines inside the house should have a metal drip pan under them, drained to outdoors or your sewer line, through a trap (note:  don't let that trap dry out, or bugs will get in, or worse, sewer gas).   The best bet is to have these in a garage or basement, where there is a floor drain, so when they "let go" the damage is minimal.   If you see any water around your hot water heater, odds, are, it is ready to burst.  Time to shop for a new one.

Water shutoff:  You should know where this is in your house and have it marked prominently.  If something does go wrong, you want to be able to shut off the water quickly.  Then is not the time to be wondering where your main water shutoff is.   Also, it is a good idea to test this periodically.  Water shutoff valves, not being used regularly, tend to rot.

And this is true of all shutoff valves, including those on your sinks and toilets.   If you mess with these valves, odds are, they will start leaking.   The joke is, these valves are supposed to let you shut off the water to your sink or toilet so you can replace the faucet or toilet parts.  The reality is, every time you work on a sink or toilet, usually the first thing you have to do is shut off all the water in the house and replace the shutoff valve to the item in question.

I suppose you could change these valves out on a regular basis, or exercise them once a month so they don't gum up and fail.   But the norm seems to be that they fail, regularly, and get replaced regularly.   I guess that is why they are so cheap - they get replaced, a lot.

Vacation:  If you go away for a few days or weeks, you might want to turn the water off.  If a pipe bursts while you are gone, it can fill your house with water.  Think it can't happen to you?  Look around your house - even a new one.  Odds are, the ice maker on your refrigerator is connected with a thin plastic hose that gets brittle over time.  Washing machine hoses can bulge and burst as the rubber rots out.  The list goes on and on.   There are so many points of failure, it isn't funny.

In fact, it is amazing the whole system works at all - which is why I say all plumbing leaks over time.  It is just a fact of life.  And the more plumbing you have, the more opportunities for leaks you have.  So it sounds cool to have four or five bathrooms, but each one is a leak waiting to happen.

And if you think you have it bad, consider the poor bastards running a nuclear power plant.  Valves leak, over time, and the rag used to wipe up the drippings is "low-level nuclear waste" and not just a dirty rag.

Owning a home is not "the American Dream" no matter how many politicians tell you this.  The American Dream is to pull yourself up by your bootstraps, and succeed on your merits, not own a bunch of shit.
Newer Post Older Post Home