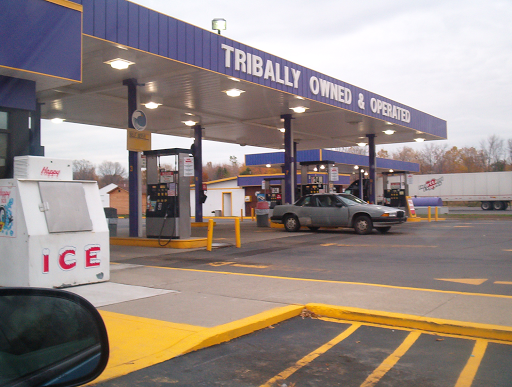 If you could run a business tax-free, you would put everyone else out of business in short order.

I noted before that perhaps the only reason drug dealing is so profitable is that it is not taxed.  Street-level dealers don't make a lot of money, but the higher-ups, if you'll pardon the pun, can rake it in, all tax-free.  Of course, getting those mounds of cash into the banking system has its own inefficiencies and costs.

Marijuana is now legal on the State level in a number of States.  But a funny thing, "illegal" sales of marijuana have actually increased.  Since the illegal seller doesn't have to pay taxes, his profit margins are greater and he can undercut the "legal" marijuana store by a considerable amount.  And since the drug is now legal, law enforcement isn't spending too much effort in cracking down (again, pun) on illegal grows and sales.

When we lived in Central New York, the local Indian tribe sold gas and cigarettes at a gas station, tax-free.  They were raking in the dough, and since their prices were cheaper than the competition, they literally bankrupted every gas station within a 15-mile radius.  It was helpful that their station was right along a major commuting route - but not on the reservation.

By the way, there are an astounding number of reservations in America, and new ones formed every year.  Some cover hundreds of square miles, others just a few acres.  It is pretty fascinating.

Their position was that any land the tribe bought was in fact, part of the reservation, and thus they were exempt from Federal, State, and Local taxes, including property taxes. They even ran a little casino next to the gas station - which was closed down as being illegal, but the last time we were there, it was opened up yet again.  And the gas station?  It never closed.

The problem with this argument of theirs is, well, if any piece of land the tribe buys is "reservation" and they can operate a business without any tax overhead, well, eventually it is a mathematical certainty they would acquire more and more land, run more and more businesses, and put other non-Indian businesses out of business.  Eventually, they would take over the country - which some might argue is poetic justice.

There would reach a tipping point, of course.  If left unchecked, as more and more Indian businesses were allowed to operate tax-free, the tax burden on the remaining businesses and landowners would increase, making them even more unprofitable - an avalanche effect would occur.  In some Counties in Central New York this is already happening - due to a different cause.  If enough people in a county are on welfare or some form of assistance, the tax burden on the remainder, skyrockets.  In some Counties, the ratio of non-workers to workers is 2:1. Tax bills of $15,000 a year on fairly modest middle-class homes are not unheard of.

Of course, this is not an issue now or even in the very near future. Indian tribes, by and large, are struggling with poverty issues, lack of jobs, drug abuse, as well as the abuse of women.  It has hardly reached the stage where Native Americans have become our overlords, or are, on average, well-off or even middle-class.

But this idea that Indians don't have to pay taxes is a curious one.  And the Bureau of Indian Affairs is still creating new tribal lands.  Maybe Uncus was the "Last of the Mohicans" but they have a Mohican reservation now in Connecticut and a casino - which was the impetus for creating the reservation in the first place.

I noted before that when we lived in Central New York, they had an article in the paper that the treasurer of the local casino was found floating face-down in the canal.  Tony "Knuckles" Russo was drowned, and the head of the casino, Anthony "Kneecap" Romano announced that Frankie "Bada-Bing" Esposito was to be the new treasurer.  I thought at the time, what colorful Indian names!  I suppose they got their nicknames during a sweat-lodge ceremony after going on a vision quest.  Sadly, it seems that the mafia is involved in some of these Indian casinos (drawn to a tax-free law-free haven like files to a pie) and as a result, the rank-and-file tribe members are not really being enriched.  But I digress.  But not by much - money is driving this whole thing, as usual.

In addition, many of the treaties made with tribes - most of which were abrogated by the US in one form or another - are being found invalid. In Central New York, the treaty signed between the State and Indian tribes was found invalid, as only the Federal Government can sign a treaty with a "sovereign nation".  When buying property in some parts of Central New York, you had to purchase "Indian Land Claims Insurance" just in case - the thing still is not settled, decades later. Apparently a similar situation exists in Oklahoma, where a big portion of the State, including the city of Tulsa, was recently deemed tribal land by the Supreme Court.

The whole "reservation" thing is, of course, a little unseemly as it is a reminder of how the Native Americans were poorly treated historically.  There really is only one other country (besides Canada that I am aware of) that has nations-within-nations, and that is South Africa with its "homelands" which served a similar purpose to reservations - to move a minority population away to make room for white settlers, during the Apartheid era.  Historically, Indian reservations were impoverished areas where there was no water or fertile land.  But when gold or oil is discovered on Indian lands, all bets are off and tribes are forced to move yet again.

Again, some may see these changes as long-delayed justice. Travelling through reservations in the Dakotas or Northern New York State, you realize there is a lot of poverty and privation. But one wonders whether the solution to this, on a personal level, is to leave the reservation and assimilate into the greater society.  While we tend to view "Indians" as primitive native peoples who were "in touch with the land" the reality is - or was - that early on, they adapted to many of the Western habits of their new neighbors, giving up a nomadic lifestyle to settle down in farms and villages, for example, in Central New York.  Sadly, they chose the wrong side to fight on, in the French and Indian wars - and later the Revolutionary War, and were rousted from these settlements, with many fleeing to Canada.

In Aurora New York, on Cayuga Lake, there is a plaque commemorating the village once occupied by Native Americans.  They farmed and had peach orchards.  General Sullivan came through, rousted the Indians and burned their orchards so they would not return.  When I mentioned this to one of the new natives of that town, they said, "Well, he had to burn the orchard, it was infested with bugs!" to which I replied, "No, the problem for Sullivan was it was infested with Indians"  People can rationalize even genocide.

But the point is, by the 1700's the Indians were well-adapted to Western ways - living in villages and farming.  The romantic notion of nomadic Indians living off the land may have had some currency further West, but for the most part, these were just people being forced off their land because they chose the wrong side of a war - a war that really was not their own.

It will be interesting to see how this plays out, though - will more and more lands turn into reservation?  And will Native Americans be allowed to run businesses tax-free with impunity? I suspect it will not come to a head in my lifetime, although I suspect folks in Tusla, Oklahoma are a little chagrined to realize they now live on an Indian Reservation, so maybe this issue will come to a head sooner, rather than later.

It also raises the issue as to whether there is a statute of limitations on injustice.  We are hearing cries again for "slave reparations" to counteract injustices from well over a hundred years ago.   Exactly how far back do we go to right wrongs?  Because if you get down to it, almost everyone has someone in their ancestry who was horribly wronged at one time in history or another.  And does it make things right to hand out money or other benefits to someone who is removed five or more generations from the injustice?

Tough question, because who is an "Indian" is as complex as "Who is a Jew?" or "Who is Black?" as we have seen in recent years.  A fellow claiming Native American status is told by the tribe, in no uncertain terms, that it is up to them as a "sovereign nation" to determine who is and is not a member - it is not determined by genetics alone.  It is funny, but when oil is discovered on a reservation, or they open up a new casino, a lot of people suddenly discover their Native American heritage, and it has lead to some recrimination and controversy as people are "thrown out" of the tribe.  Put a dollar on the table, and people's behavior goes off the rails.  It is human nature.

But getting back to "Who is an Indian?" or "Who is Black?" it seems like a moot question in an era where claiming minority status is to claim a lesser share of the American pie.  But in a future era, where racial or tribal membership conveys benefits - this may become something that people fight over.

Like I said, maybe not in my lifetime. But then again, maybe identity-theft politics are the first step in this direction, as some are finding that claiming to be a minority does indeed convey some benefits in our modern society, particularly in academia.

The Indian wars are coming - it is just a question of when.