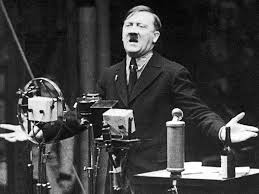 "In this week's Ted Talk, we hear a compelling speech from a Mr. A. Hitler, who's controversial bestseller, My Struggle is stirring up the blogosphere. Ladies and Gentlemen, please welcome Chancellor Adolf Hitler!"