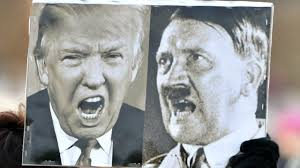 The difference between Trump and Hitler was that Hitler had a chance to enact his ideas.

A lot of folks on the Right get flipped-out when someone on the Left compares Trump to Hitler.  "Hitler killed six million Jews!" they cry, "It is insulting to compare that to Trump!  Trump hasn't done anything even remotely close to that!"

It is not that Trump wouldn't do horrible things - indeed he has.   You do remember the whole immigration thing, where families were separated from their children at the border, and often the children were sent back - to the wrong country - without their parents?  I mean, that is cruel - not six-million dead cruel, but cruel nevertheless.  It demonstrates a propensity for cruelty.

And while we don't have Hitler's concentration camps, we do have Trump's privately run prisons.  But again, that is not even a close comparison.

Therein lies the problem with making such a comparison.  When you compare Trump to Ghandi, he comes off looking like a proper villain.  But when you compare him to Hitler, well, his sins look pretty inconsequential.

But methinks that the only reason Trump hasn't committed horrific crimes is that he hasn't had the chance to so do - yet.   If he had been re-elected or installed himself as dictator-for-life (which he may still try to do) there is no telling what could have happened.  Bear in mind we have close supporters and confidants of his pushing for a putsch, and claiming that certain opponents should "face a firing squad" for their "treasonous" insistence on the Democratic process.  His supporters chant "Hang Mike Pence" and talk about rounding up and executing Democrats when the time comes.  Many of his supporters are actual nazis.  Others are Qanon believers, which is a conspiracy theory that is as implausible as the "Jewish World Domination" theories bandied about by the Nazi Party.  Same shit, different day.

Now, granted, given Trump's son-in-law and daughter are Jewish - as well as his support of Israel - it doesn't seem likely that Trump would be going after Jews as Hitler did.  But there are plenty of other racial, ethnic, political, and sexual minorities out there that he has a visceral hatred of.  Bear in mind that whites make up 70% of the population in the USA and it isn't hard to see a scenario where Blacks and Hispanics are vilified as a criminal class trying to destroy America.  Oh, wait, he's already gone there.

It is like the serial killer who is caught before he can kill anyone.  Does that mean he wasn't a serial killer, because he didn't have the opportunity?   Suppose Ted Bundy was run over by a car while crossing the street to approach his first victim.   We would never have known of his proclivities or inclinations - or potential to do great harm.  The story would have been a tragic pedestrian accident.  But that doesn't mean he wasn't an evil person who wanted to kill someone, only that we would have had no way of knowing.

With Trump, we have a way of knowing - his actions, his words, his moods.  All have been quite evident from the get-go, but have enhanced in the last few months.   This is a man who listens to no one, who writes in big letters with a magic marker, even when signing his name.  A man who dog-whistles to white supremacists or tells rioters he "loves" them.  He would say or do more, except that in today's political climate, you can't say certain things - including certain things he has said.  And the reason you can't do or say these things is history.  You can't be overtly racist or antisemitic because of Hitler, because of the KKK, because of the past.

Trump is like the Bundy run over by a car.  Sure, he didn't put six million people in death camps - because he never had the chance to.   But would he have had the inclination to?  That is the question, answer it for yourself.  In my mind, the answer would be, "yes, under certain circumstances, and if we let him get away with it."  And we nearly let him get away with it - and he still may.

I took as piss on "Kyle" Smith, the snarky writer for People Magazine and stringer for the National Review.  He recently wrote a snark-free piece on why Trump needs to be impeached and barred from ever holding Federal office ever again.  Apparently even Kyle was sobered by what happened yesterday - that and the flaming wreckage of the Hindenburg that is the Republican Party.   Now bear in mind that just a couple of weeks ago, he was trashing Jill Biden in a three-part article as being illiterate based on her E.ed dissertation.  Even he thinks Trump needs to go.

Is Trump like Hitler?  Yes, for sure, in action and speech, in his political instincts and how he panders to populist views and scapegoats various minorities.  Not just in a similar way - the exact same way.  So it is no surprise that neo-nazi groups are willing to march and riot for him.  Trump isn't like Hitler in that he didn't have a chance - yet - to commit real atrocities.

But hey, there's still time.  And he does have access to the nuclear codes.