Requiem for a Coffee Maker 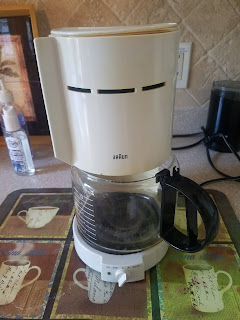 I wrote before how cheap coffee makers are the best kind.  They make good coffee, despite what the intense coffee guys says.  Sure, you can spend $3000 on an espresso maker, and then justify the cost by saying "Well, at $1 a cup, it pays for itself in a decade or so!"  But that is a false logic.  You are out $3000 either way, and if you go with a cheaper coffee maker, well, that money, compounded with interest over a decade, comes to over $5900 at 7% interest.

A little here, a little there, and it adds up.  People laugh at the idea that not buying $5 coffee at Starbucks will save money, but it does.  And oh-by-the-way, with the fancy coffee drinks plus the "tip" for that highly-skilled neurosurgeon known as a "barista" it does indeed come to five bucks, if not more.  You want to accumulate wealth, you have to make sacrifices.  One does not come without the other.

But getting back to the coffee maker, we found this one on the street in Charleston when visiting there once.  We were sharing a hotel room with some friends, and the in-room coffee maker that makes one cup at a time, just wasn't cutting it.  We saw this one, on the curb, in a nice bag, next to the trash, and figured, "Why not give it a try?"    Turns out it worked fine, with a little adjustment.  The previous owners had lost the lid to the carafe, so the little spring-loaded valve at the bottom of the filter basket - that allows you to remove the carafe in mid-brew - wouldn't open up.  I removed the valve and tossed it and "wa-la" - we have a working coffee maker.

That was ten years ago.   And over the years, it has made great coffee.  I have cleaned it several times with dollar-tree lime-away to remove deposits.  But it has been acting oddly as of late, and yesterday morning, it tripped the circuit breaker and made a burning smell.   It did it again this morning (after making coffee, fortunately) and so off to the trash it goes.  Being cheap is one thing, burning down your house is another.

Looking online, a replacement coffee make from Walmart starts at $10 - although that is only a 5-cup machine. If you want to spend a little more, you can go 12 cup.  You can get fancy with a Mr.. Coffee at $17.95 if you want to.  I am not sure I want to. For a few dollars more, you can get one with digitally programmable features.  Sure that sounds nice - program in when you want it to brew, so you wake up to the smell of hot coffee.  But if you sleep late, you end up with a pot of stale coffee.  And if the power goes off.... no coffee.  Plus, it can be a PITA to clean these types, as the electronics are sensitive and if you get them wet - well, all bets are off.

Small appliances like these are cheap - but you can double, triple, quadruple, or even 10x the cost by getting fancy.  It is worth it?  Maybe.  Maybe not.  The old machine was a Braun and obviously of good quality, given how long it has lasted.  But not a fancy machine with a timer or multiple settings or whatnot.  And alas, Braun no longer makes this model, but has gone to fancy "Brewsense" machines.  UPDATE:  I found them on Amazon for an astounding $148!!!

And it seems that I am not the only one to admire the hoary old Braun - although I don't quite think it is "vintage" just yet.  People are selling them on eBay for $50 or more - sometimes with $50 in shipping!  Sounds like of expensive for what is probably a 30-year-old machine that might also be near the end of its design life.  Nothing lasts forever, and buying things that are that old is often short-sighted.

On the other hand, how long is the $10 coffee maker going to last?  Funny thing is, it probably will go through more than $10 in filters in its lifetime. And of course, they use a different kind of filter than the Braun did - and I still have a stack of those.

Reading reviews online, it seems that most people are happy with the cheap coffee makers, but the unhappy people ordered online and they arrived broken.  Others mention a flimsy power switch.  It might be worthwhile to look in the $20-$30 range.  Or maybe a trip to Charleston is in order....

I think also, I will go to Walmart and inspect these in person, before committing to buy.  No point in spending even $10 on something that will break in ten days.  I think also this is the kind of thing you can pick up at a garage sale for a dollar or two, if you look hard and are willing to wait.

In the meantime, well, we have the french press - so we are hardly out of options!

RIP old Braun.  You were a good coffee-maker.  And the price certainly was right!

UPDATE:   We bought the $10.84 "Mainstays" 12-cup coffee maker from Walmart.  We bought it in person, as many of the online reviews mentioned them being damaged in transit.  Other than it uses a different filter (the Mennonite hat, not the v-shaped) it seems to work as well as the Braun - but for how long?  At $10.98 it isn't even worth buying a replacement carafe, if it broke.