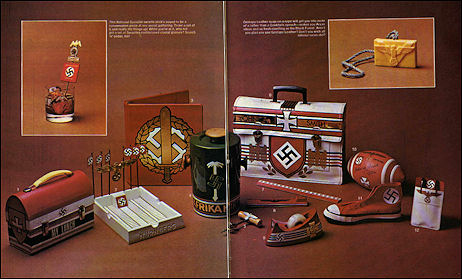 People used to collect Nazi regalia. 50 years from now will people be collecting the Nazi regalia of  our generation?
I saw a picture on the internet of a representative from New Jersey sweeping up debris from the halls of Congress. The riots are over and they are cleaning up and finding all sorts of junk left behind by these so-called patriots. This includes confederate flags, Trump flags, shields, and weapons of various sorts as well as other accessories. I kind of wondered if somebody from the Smithsonian didn't call and ask to save this stuff so it could be put in their collection to display in years from now.
Perhaps I should score one of those MAGA hats on ebay, as it will be a collector's item in 5 or 10 years. I can put it up on Craigslist in 2030; "For sale vintage MAGA hat, circa 2019. Mint condition. hardly worn. $500"
Perhaps this is the closest analogy between Trumpism and Nazism – the wardrobe. There seems to be a sort of an informal uniform that was created and actually sold by the Trump campaign.  I read online that Spotify has shut down the Trump merch store so you can no longer buy your MAGA hat online. Perhaps, however, you can still buy your Trump armbands.  Sieg Heil!
Just an odd thought.  Today, we are seeing history made, right down the street from the Smithsonian American History Museum.   I wonder if they are collecting and cataloging artifacts?  It may seem unseemly, but then again, they display items from the Jim Crow era, such as "whites only" signs and whatnot.   Maybe in 50 years, there will be a diorama of rioters at the Capitol.  Or maybe not - that might just glorify that sort of nonsense.
UPDATE:  Parody is sometimes too close to reality.   Turns out the junk left behind by the rioters - as well as vandalized items, are going in the Smithsonian.
Newer Post Older Post Home