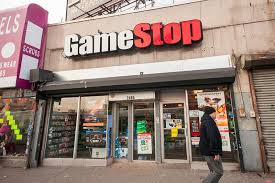 Nothing good ever came of social media, but maybe shooting down short-sellers is a good thing.

I mentioned before that amateurs have no business buying derivatives.  Derivatives, as the name implies (from Calculus) are bets placed on the direction a stock price will go.  When you buy a stock, you are betting the price will go up and maybe it will pay dividends.  When you sell it, either you need the money, or you are worried it will go down in price.  But a derivative merely is a bet - a highly leveraged bet - that the price will go up or down (long or short) in a specified period of time.

The problem with derivatives is they can bankrupt you.  If you spend $5000 on a stock, the most you can lose is $5000 - if the company goes bust.  But odds are, you won't lose that much, unless you make a really bonehead investment, or put all your money into some speculative IPO or something.  But if you spend $5000 on an option, you have the potential to make tens of thousands of dollars - if not more - in a very short period of time.   So it appeals to gamblers - and those who have inside information.

Problem is, like all gambling you can lose.  But unlike a slot machine or a stock purchase - where all you can lose is what you put in, with a derivative, you can lose far more than you bet.  And often this creates chaos for the bettor.  For example, Joe Blow buys a option on a stock price.  He pledges his stock portfolio as collateral.  The stock price doesn't go in the direction he thought it would, and he loses everything as a result.  A $5000 "bet" results in a $50,000 loss - or more.

I stopped viewing Reddit because it was like all other social media - toxic.  I liked the comics, but the comments by the "Redditors" were kind of stupid and predictable after a while.  I found online comics at other locations - and the better artists have their own sites or are hosted elsewhere.   Reddit was a good place to go for news about gaming, the new games, controversy about games, and of course, a little misogny. Reddit brought us the_donald and today they are just as busily hyping left-wing causes. It is interesting how "brigading" can drive Internet traffic.

One of the more odious "subreddits" on the site was "Wall Street Bets" - and some legitimate news sites, on a slow day, would quote from it.  Most of it is bored teenagers, posting hypothetical "profits" that they could have made had they done such-and-such a trade.  The media would then write an article as if these were actual trades and some guy invested $7000 and turned it into millions in a matter of weeks - the odds of which, are, to say the least, quite long.  It is sad reflection not on Reddit, but on the "mainstream media" for reporting such dreck without much of a qualification that anonymous postings on the Internet could be..... bullshit.

The evil in Wall Street Bets starts with the name - they are encouraging gambling as a form of investing, turning markets into casinos.  This sort of thing does not end well for the small investor.   It is prime for "pump and dump" schemes, where a stock is hyped online and people buy it, driving up the price (which appears to validate the hype, driving the price up further) until it eventually collapses.  A lot of little people get hurt in these schemes, but sometimes big players do as well - and we don't feel sorry for them.

In a recent "controversy" someone has been hyping the stock of Gamestop, which is the Blockbuster Video of computer games.  They have - or had - a plethora of brick-and-mortar stores selling video games and gaming accessories.  But the combination of online sales (and downloading) as well as CoVid have hurt the company and they are closing locations.   It seemed like a no-brainer for some big investment firms to short-sell the stock.

So, someone started a thread on Wall Street Bets and they hyped the crap out of the stock, and lots of little people bought it. The share price went up 700%.   Again, market cap means nothing, and this doesn't mean GameStop was now worth billions, only that the last sucker in paid the highest price.  In thinly traded stocks, even small trades can drive the price up or down considerably.

Think of it this way.  Suppose you had a small company with 1,000 shares of stock, mostly held by you and family members and maybe a few employees.  Someone wants to buy a share of that stock, but there are so few, and so few owners, that no one wants to sell.  So the buyer has to offer a sizable amount of money to convince someone to sell, which they eventually do.  Suddenly, your stock price has gone up by 20-30% or more.  You're sitting on a gold mine!   But word gets out that your stock price went up, so others are interested in buying - but the shareholders, seeing all these gains, are even more reluctant to sell.  So someone offers even 20% more and a shareholder sells - and the stock price is on a tear!   Within a few trades, your share price could double overnight.  But it doesn't mean diddly.

Similarly, suppose one of your shareholders decided to sell - they need the money.  It is a thinly traded stock, so there are not a lot of buyers - and the seller has to accept a low price just to get rid of the shares.  By the way, this is a real problem for very small, family-owned companies - most times, the shares are worth nothing, and they don't even pay dividends.  But now the share price has tanked, and the other shareholders panic - the stock price has gone down!  Better sell now before it is too late!  Greed and Fear rule the market.

Now, scale this up by 1000% or more and you can see how a pump-n-dump scheme will work.  In most cases, the people getting hurt are the small investors.  A teenager in New Jersey buys an e-mail list and then hypes an obscure over-the-counter stock selling for pennies a share.  He had previously bought 1000 shares, which helped drive the price up - fulfilling his promise that the "stock price is going places!"  It helps if the company has a name that sounds technical.  People buy a few shares of the stock ("What have I got to lose?) and it goes up further.  The teenager sells his shares and the price collapses.  Everyone loses a little bit, and the teenager makes tens of thousands of dollars - if not more.   And yes, this actually happened and still goes on today.

With the GameStop deal, it is a little different, in that the people getting hurt (so far) are hedge funds who were short-selling their shares.  Their options are not only worthless, they owe money as they have to buy those shares they "borrowed" at a much higher price than their option.   The little people who bought into this nonsense - and drove the price through the roof probably will lose money, too, particularly those who bought at the height of the bubble.   And no, GameStop isn't suddenly worth ten times its previous valuation - it is a pump-and-dump bubble.

Of course, given that Reddit is all about gaming, it is obvious why the people behind this scheme - and it is a scheme - picked Gamestop.  They are also doing a similar pump-n-dump with Blackberry, although I can't imagine why, other than some hedge fund is short-selling that as well.

It is hard to feel sorry for some hedge fund who short-sells stocks, however.  And maybe there is some poetic justice in a rabble of online investors sticking it to the man - although I suspect a lot of those small investors will lose their investments, as small as they are.

People have tried to short-sell Tesla stock, too, and have had their ass handed to them on a platter.  Tesla is no doubt over-valued.  Sure, they make a fine car, but as it turns out, the biggest source of income for Tesla is carbon credits sold to other car companies.  What happens when those car companies start producing their own electric cars?   Tesla's carbon credits may be worth less, although perhaps not worthless.   Also, the entire profit scheme is based on carbon-credit laws, not on actual profits made in the marketplace.   A change in laws could make such carbon credits worthless overnight.  Elon Musk is no doubt happy Biden is President.  Speaking of which, it is my imagination, or has Musk been hitting the buffet a lot lately?  He looks kinda puffy.

So what does this mean for the small investor?  Well, you do what you want, but to me, it means run away as fast as possible.  Getting caught up in someone else's scheme to pump-n-dump a stock sounds great for them, but what does it do for me?  This is my survival, my livelihood at stake - nothing to play with as if it were a game.

So no, I won't be buying derivatives, nor will I be buying stocks hyped on Wall Street Bets or Robin Hood.   And the reason why I say this is, I've seen in the past how people have lost everything getting involved in schemes like this.   Everyone wants a shortcut to wealth, but often these shortcuts are just a ride off a cliff.

But the real lesson here is about the power of social media. Reddit and Facebook and Twitter made a President and then unmade him.  A cute trick, but one that didn't really profit anyone too much.  Today, we see a more profit-oriented use of social media, and this particular pump-n-dump isn't going to be the end of it.   Expect to see more stocks hyped on Reddit and other social media outlets, unless the SEC gets involved.

Of course, maybe that won't make much of a difference. When that teenager in New Jersey was fined by the SEC $50,000 for his pump-n-dump schemes, all he said was, "do you take a check?" - as he had made far more than that hyping penny stocks.

Gambling is not investing, and investing is not gambling.   If you want to play games with your money, fine.  But don't cry when it all goes horribly wrong.