Georgia Goes Its Own Way 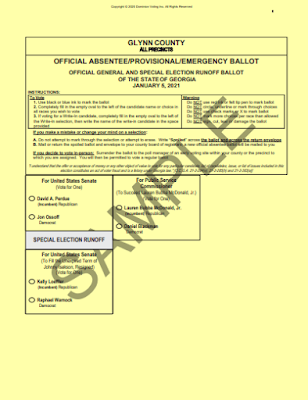 Why are we having runoff elections today?

I received three e-mails from readers in three "Commonwealth Nations" recently - Australia, UK, and Canada, all running down the American political system.  "Our system is so much better than yours!" they said, "We don't have a President or Senate or House of Representatives, we have..." and then they proceed to describe a system which pretty much is similar to ours.  I mean, yes, there are details here and there, but the same outline of a bicameral legislature, and executive branch, and a judicial branch are all present.  After all, we pretty much copied our system from the British, and in turn, over the years they have reformed theirs to be more like ours.  The Queen is now a ceremonial position, whose only duty is, apparently, voting as a tie-breaker in Canada.  But I digress.

Fortunately for these Commonwealth Nations, they don't have to suffer from conservative parties who are always trying to cut social programs and lower taxes. And they don't suffer from polarization in politics, where conservatives and liberals go at each others' throats.  And thankfully, they don't have to deal with weird narcissistic leaders with funny haircuts, who build a cult of personality around themselves - or worse yet, political dynasties, where family members successively run for offices.  They are sheltered from all of that.

Like I said, our two systems are pretty much the same.

The inefficiency of the American system is, ironically, because it is older. We are dealing with a Constitution that was drafted in the late 1700's, whereas Commonwealth Nations, many much older, have newer, more streamlined electoral systems.  The big difference is, of course, Federalism.  When we talk about "States" in America, the term originally referred to what were, in effect, individual countries. States in America are not territories or provinces or prefectures. A few, in fact (Pennsylvania, Massachusetts, Virginia) refer to themselves as "Commonwealths".  And each has their own set of laws and legal theories.  Louisiana, for example, traces much of its legal history back to the Napoleonic code, California, of course, to Stalinist Russia  (just kidding!).

There is no commonality of laws in the US, other then Federal law, and to some outsiders, this bifurcation of laws seems strange.  Trump can pardon his crony friends from Federal crimes - they still may face justice in State courts.  But it gets even weirder.  In New York State, I could be under the jurisdiction of our Village Police, Town Cops, County Sheriff, State Police, and, presumably, the FBI. In Virginia, it was a little different - the City of Alexandria wasn't subject to the jurisdiction of the surrounding County.  Meanwhile, down here in Georgia, we have a State Patrol, a County Sheriff, and a County Police - the latter of which we may dissolve later this year.  Weird, I know.

There has always been this tension between Federal law and State law.  In fact, we fought a Civil War over this "States Rights" issue.  States are given freedom to run their own affairs, as individual countries would, but over time, the Federal government has exerted more and more control.  Using the "Commerce Clause" of the US Constitution, they argued they are empowered to regulate interstate commerce, and use this excuse to enact laws and regulations of one sort or another.  Another tactic is to take away money from people through taxes, and then give it back to the States, provided the States enact laws to do the Federal Government's bidding.

So, for example, the Federal government cannot enact a law requiring people to wear seat belts, but they can, under the Commerce Clause, create regulations requiring manufacturers to install seat belts.  They can threaten to withhold Federal highway funding (in the hundreds of millions of dollars each year) if States don't enact their own seat belt laws.  As a result, we have mandatory seat belt laws in all 50 States, but the enforcement mechanism and penalties are different in each State.  We have motorcycle helmet laws in most States, but not all.  It is an odd patchwork of laws that vary from State to State.

And this goes for election laws.  Each State determines how to run its own elections, even for Federal positions, such as Representative, Senator, and President.  What voting machines - or whether to use machines at all - is determined by each State.  You may recall back in 2000, Florida was using its infamous "butterfly ballot" where selections were made by punching out "chads" in pieces of paper with what looked like a knitting needle.  Most other States have gone to a voting machine.

Speaking of which, I mentioned before how voting works in Georgia this year.  The new machines are merely printers that print out ballots.  These paper ballots, printed on special paper are then fed into a tabulator, which counts the votes.  As this was the first year for this technology, a hand-count was ordered and the numbers matched.  A second machine count was ordered by the Trump campaign and the numbers matched again.  Then, in response to Trump's claim of signatures not matching on mail-in ballots, the FBI checked all those - no discrepancies were found - once again!

So today, the new rumor is that the QR codes on the ballots (which is what the tabulator actually reads) are being spoofed for Biden.  But since the QR codes are encrypted, it is not clear how people on Facebook are "proving" the ballots were tampered with - they only make baldfaced claims to this effect, but don't show how the QR codes could be altered as they cannot read them. Moreover, if such an allegation were true, the hand-recount would have shown huge discrepancies in the totals, as in the hand-recount, the actual dots are counted, not the QR codes.

Oh, right, silly me.  Thousands of poll workers are in on the conspiracy!  Oh, please!

There are two interesting aspects of Georgia election law that are different from some other States.  First of all, we have open primaries. Georgia is a largely conservative State, and historically voted conservative.  This meant Democratic until about 1970, when the two parties finally switched allegiances. Today, it is pretty solidly Republican, or at least was.   In an open primary State, you can choose to vote in either the Democratic or Republican primary, regardless of your party affiliation (or lack of any party affiliation).   Voting in the Democratic primary is kind of dumb - most candidates are running unopposed, and they usually will lose in the general election (historically).  In many cases, the Democrats have not bothered to run any candidate whatsoever.

In the Republican primary, however, you have a choice of the moderate Republican or the crazy right-wing Trumpian nutjob.  Since we have open primaries, fewer nutjobs (we still have quite a few, though) have ended up on the ticket in November.  In closed primary States, only the "party faithful" can vote in the primaries, and as a result, extremists tend to win more primaries - for both parties. But open primaries may explain why our Governor, Lieutenant Governor, and Secretary of State are willing to go against Trump with regard to this "election fraud" fraud.   Well, that and they know that what Trump is asking is illegal and they would go to jail if they accommodated him.

Another odd aspect of Georgia election law - which some other States follow as well - is that in order to win office, you have to have over 50% of the vote.  In a three- or four- or more-way race, this means a run-off election is required if no one candidate wins more than 50% of the vote.  This is why we are voting today.   It is a good idea and a good law as it prevents "spoiler" candidates from siphoning away votes and allowing a candidate representing a minority of voters to win.

For example, in Maine, their governor in recent years was not very popular.  Democratic votes routinely out-voted him in elections.  But since there were two Democratic or left-leaning candidates running for Governor (one a delusional businessman who thought he was "helping" by running), the Democrats never won, and an odious, obnoxious, Trump wanna-be ended up winning the Governorship, again and again.   Today, they have "Ranked Choice Voting" which the previous Governor fought, for obvious reasons.  Today, he is no longer Governor.

What is interesting is that this run-off is happening over a holiday - when a lot of people have time-off during the early voting period.  So record numbers of people have already voted.  And this bodes well for Democrats - but we'll see.

Last night, at 10PM, the doorbell rings.  A lady had driven all the way from Washington, DC to ring doorbells and "get out the vote".  They are pulling out all the stops this time, and frankly, this was the type of political action Hillary should have used, but failed to do, counting instead on big-money donors and political attack ads.   Small donors are important, as if you get someone to send in $10, they will be more likely to vote as they are literally invested in the process.

Sadly, she told us many people she contacted in nearby Brunswick were not even aware an election was taking place!  I guess they don't watch television or go on the Internet or even read a billboard or sign.

The Democrats send me maybe 4-5 texts a day, as well as several phone calls.  I look forward to the election ending.  Of course, every YouTube video has ads on it these days - the GOP ones are quite negative: "Warnock is a Communist!"  "Osshoff takes money from China!"   They are so over-the-top as to be unbelievable.   Maybe some die-hard Trumper will believe GOP lies, but not me.  The party has shot its wad in the credibility department with this "election fraud" deal - I think it is safe to just assume they are lying about every other damn thing.

"Whenever you enter into a business relationship predicated on a lie, no matter how trivial, it will go downhill from there."   And the GOP has branded itself as the party of desperate lies.

The sad thing is, given all that, this will still be a very close election, and given the recent history of the GOP or more precisely, the Trump Party, the results of the election will be deemed fraudulent if Democrats win.  Counts and recounts will be ordered, the same or new conspiracy theories will be floated, and it will never end.  GOP Senators may push to refuse to seat Warnock and Osshoff, alleging election skullduggery.

Speaking of new election conspiracy theories, Lou Dobbs, a huge Trump supporter, was forced to admit there was no evidence of voter fraud in the recent election - as Fox was being threatened with libel suits by the voting machine manufacturers.   But rather than be dissuaded by this, he doubled down his bet, alleging that the complete and utter lack of evidence of voter fraud was itself in fact, evidence, as it showed that those in charge were willfully not looking for evidence of fraud and/or nefarious Democrats were so good and covering their tracks.   If you think about this for a second, your head will explode.

I mean, that is freaking genius.  You can now make any wild-ass allegation and fact-checking simply doesn't matter.  The fact the fact-checkers couldn't find any facts is a fact that the facts have been, in fact, hidden away!  So the moon landing was faked and the lack of evidence is proof of that.  It is scientific theory stood on its head!

Maybe in 2021 people will turn away from this insanity.  Let's hope so, anyway.  Because history has taught us where such insanity leads us to - civil wars, world wars, death camps, and crematoriums.