No Longer Look The Other Way 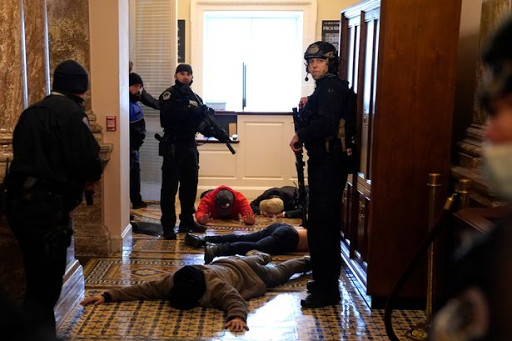 Republicans have looked the other way for too long.  Now, they look away in disgust.

The GOP has taken a viper to its breast.  Where it came from is anyone's guess.  Qanon theories are clearly planted by the Russian Internet Research Agency, and right now, Putin is laughing his ass off.  He thinks we are weak and easily divided.  So did Tojo.  So did Hitler.  And yes, we often have to be dragged, kicking and screaming, into a conflict.  But when we are resolved and our fur is up, it is another story.

Watching the "protests" at the Capital, I come away with a number of thoughts.  First, it doesn't appear a lot of people are there - they cover the Capitol steps, but just barely.  Not much of a crowd for a coup.  Second, there are a lot of Q-anon t-shirts in the crowd.  These are mentally ill people.  Third, we had a shooter enter the Capital back before 9/11 and shoot a Capitol Hill officer.  Supposedly they beefed-up security since then.  One would think security was beefed up after 9/11.  Apparently not.

By the end of the day, the protesters will be rounded up and the violent ones arrested.   The police and national guard will reclaim the Capitol.  This is not the beginning of a coup, or at the very least, these are not the people who are going to be leading a coup, as they seem to have no more of a plan than Antfarts do - just to cause mayhem.  In a real coup, you have to have a list of strategic sites to occupy with armed insurgents, starting with the broadcasting stations and the armories and military bases - and you'd better have it all set up with some junior officers in the military who are sympathetic to your cause.   It doesn't seem to be the case here.  Trump can't plan things that well.

Well, I could be wrong about that.  We'll see, I guess, in the days to come.

But I think this event, as well as Donald Trump, Jr. declaring "War" on the GOP and claiming it is now the "Party of Trump" may backfire in a big way.  All the big-money donors and corporations were willing to hold their nose and go along with Trump because they saw him as a means to an end.  They were willing to look the other way, but today, they look away in disgust.  But more importantly than any patriotic impulses the Billionaires of America have, is the pragmatic decision as to whether Trump will do their bidding.

And that is what is going to cause the demise of Trump.  When they found out they couldn't control Trump, a lot of people became alarmed.  He gave them their court nominations and their tax cuts, but ballooned the budget in four years by $8 Trillion - about what Obama did in eight.  And Trump wasn't inheriting the worst economy since 1929, either.  No, he took the slow-growth stable Obama economy and wrecked it good.

The big money donors saw the writing on the wall - Trump was too much of a loose cannon, and willing to go after big corporations and threaten them with anititrust suits or even RICO prosecutions.   He bullied Carrier (an old employer of mine) for closing a money-losing factory.  Trump declared victory and they closed the plant anyway (for the most part).   It was sound and fury signifying nothing, other than to give Carrier a black eye.

He went after GM and other auto manufacturers for supporting California emissions standards - arguing they were colluding with one another in that regard.  He got GM and a few others to back down - the rest realized much of Trump's threats are empty ones (something our Governor and Secretary of State seemed to realize as well).

Traditional Republicans - you know, the kind that wanted to reduce the deficit, slash social spending, and eliminate regulations - are appalled by Trump's deficit spending and his call for a $2000 handout to Americans.   Trump is playing a Democratic card here, and while Democrats might go along with him - if nothing else, to be a spoiler - they are not about to join in his antics or switch allegiances.

It seems odd to me, though, that the "rugged individualists" in the MAGA party are grousing on Parler about the $2000 stimulus checked they were "owed".   This is not Republican thinking - or even that of Democrats.  It is the Spoiled Brat Party thinking - kids living with their parents who apparently have a lot of time on their hands to play video games and spend time online.  You know, like that loser who drove through a crowd in Charlottesville a few years back.  "Mom, watch my cat for me while I go run over some people while attending a Nazi rally!"   This is where this "incel" crap takes us.  Brought to you, by.... The Russian Internet Research Agency!

Maybe there is another aspect of it as well.  Trump was out of control.  They though they had a lap dog, and what they ended up wasn't that - but it wasn't a pit bull, either.   Just a spastic Chihuahua. Yapping and barking and spinning in circles and biting your ankle when you aren't looking.  You know, the kind of dog you just want to stomp, but you're too nice a person to do something horrible like that, and besides, his owner is right there.  But those needle-like teeth leave little scars and the wounds get infected.

You can piss off the Democrats. You can make Nancy Pelosi clutch her pearls.  You can 'own the libs' all you want.  But when you go up against Corporate America, you are digging your own grave, politically.  It is akin to McCarthy going to far and trying to take on the US Army to get his boyfriend out of the draft.  One bridge too far.

Trump seems obsessed with tearing down the GOP on the way out the door, like Samson pulling down the pillars of the temple, as I noted before.  This will kill his chances in 2024 and that of his children's political ambitions as well.  Donald Jr. may think the party belongs to Trump, but others in the party may have different ideas.  Will Newt Gingrich go along with this?  Ted Cruz?  How long will he toady to Trump after this fiasco?   It may be an event which will finally push many Republicans away from Trumpism and put the nail in the Trumpian coffin (and a stake though the heart of that vampire).

Perhaps. Perhaps not.  Maybe this is the "coup" people have been talking about.  Maybe but I doubt it. Yes, there were a lot of people at this protest.  Most are as unhinged as these "tea party" people.  Some are clearly mentally ill.  Only a few hundred at most were bent on destruction and mayhem.  This is not enough to take over a country of 330 million.

It is enough, however, to tear down the remnants of the GOP and bury Trumpism forever.

P.S. - if you break into the Capitol building, or any building for that matter - or any home - expect to be shot.  Some of these protesters are acting shocked that a "protester" (terrorist) who broke into the Capitol was shot by Capitol police after trying to assault them.  Expect similar treatment at the White House, the Supreme Court, or even your local airport terminal.  This isn't a fucking game, kids!  It's terrorism.