Trump and the Cult of Masculinity 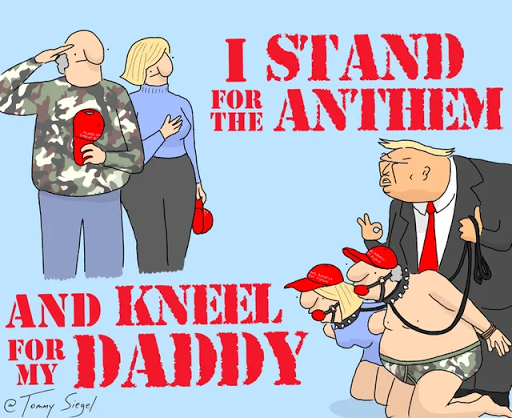 The least masculine person in the world is deemed to be the uber-male.  WTF?

A recent article on CNN talks about Trump and "male dominance".  It probably is a lot of hooey, but then again, I started thinking about it and it made some sense.  It explained why Trump non-ironically uses the Village People's "Macho, Macho Man" as a theme song at his rallies.  It explains the obsession with marrying super-models (and divorcing them before their sell-by date expires - poor Melania!  Plastic surgery only extends this so far).

People want to be dominated.  They want to obey maleness.  As a gay man, I understand intimately how this works.  I understand why the military was against Women in the military - outside of token involvement in the WAVES or WACS.   Men understand the "male hierarchy" where someone is the "Top-Kick" and others are the low-level "Grunts" taking orders.   Women in uniform?  It could upset the whole balance!  Suppose instead of declaring war, they decided to make a pot of Chai tea, have facials, and then talk the whole thing over.  Where would that leave us?

I am being sarcastic, but there is a nugget of truth to it.  In the gay "community" (a term I despise - there are no such "communities" per se - it is just a term used by identity politicians and pollsters trying to define demographics) they talk of "Tops" and "Bottoms" and woe be to the person who claims to be "Versatile" or worse yet, Bisexual.  Claim your position and stick with it!   And like in the military, there are plethora of bottoms and few tops.  As my Cuban friend likes to exclaim, "This party is like my Tupperware drawer - all bottoms and no tops!"

But it isn't just men who follow this male hierarchy.  I noted before I did an internship at Planned Parenthood in college.  It was an interesting experience, in part because I was one of three men working in an outfit that employed dozens of women.  As one of the middle-aged ladies explained to me, "We have the janitor (he lifts heavy things for us) and the director!"  I was aghast at this sexism coming from women working in a progressive organization.   But they explained to me that they needed a man to "run things" as if a woman were appointed to lead, "We'd spend all day tearing her down."  The other women in the room nodded in agreement.

That was 1985 and I wonder if much has changed.  A friend of mine worked directing a non-profit.  He was the only male in the place, the rest was staffed by women.  He retired from there and was replaced by a female, who the rest of the staff  "spent all day tearing her down."   Maybe there is something to this.  I hope not.  I would hate to think our destinies are determined by our chromosomes - that would not be fair.

But assuming this cult of masculinity is a real thing, why on Earth would Trump of all people be deemed the head of it?  I mean, let's face it, he is the least masculine man I know of - repulsive in fact.  He hardly is on the testosterone level of Arnold Schwarzenegger or anything.  When he doesn't get his own way, he is hardly the stoic masculine ideal - rather, he whines and cries like a little baby.  He shouts and cajoles, but also begs and whimpers.  This is not the He-Man ideal.  The ancient Greeks would be ashamed of him.

On the other hand, in modern America, masculinity has less to do with how much you can bench press  at the gym than with what kind of car you drive or how much money you have.  And perhaps that is why Trump is obsessed with hiding his tax returns and concealing his real wealth.  He is afraid to drop his drawers and reveal his child-sized penis.

And that, in short, is why he has a succession of trophy wives, bought and paid for. To many men in America (sadly) being male means having the hot wife - the "conquest" or trophy, to show off to other men, not so much to enjoy for yourself.  Maleness in America is judged by how jacked-up your monster truck is, how hot your wife is, how bad-ass your jet-ski is - how much you can consume on credit to show off that you are a real man and can "provide" for your family by buying yourself a metalflake bass boat.  It is, in short, the culture of belligerence.

As I noted in that posting, "Heck, back then, the toughest guy we knew was Joe Namath, and he wore pantyhose. Or Muhammad Ali, who recited poetry." How times have changed.  Today we have professional wrestlers or Presidents who scream at us with faux machismo.  Athletes no longer recite poems they wrote - in fact, they are pretty unmemorable as a result - other than for their arrest records or steroid or gambling scandals.

And that's why Hillary lost and why Democrats have lost in many States.  Voting Democratic is seen as gay, or effeminate or less than manly.  Only sissies and "snowflakes" vote for Democratic candidates. That's so wimpy - caring about the environment or minorities or making sure children have a hot lunch at school.  Real men are rough and tough and care more about buying a new motorcycle.  Maleness, in modern America, is all about selfishness.  How can I get more?

That is sad, as at one time in America, what it meant to be a man was less about "hanging out with the boys" and swilling beer and watching TeeVee sports, and more about being a Dad, providing for your family, and going to work every day to do so.  Today, that is seem as wishy-washy and suspect.  Hey, if you haven't gotten divorced at least once you aren't a real man.  And not paying child support, that's what real men do, right?

Maybe that is the underlying problem - and Trump is just a symptom of that.   Men who hate their ex-wives because they have to pay child support become misogynistic and view women as harpies who are after their money, as opposed to the Mothers of their children.   And then again, there are women, particularly young women, who are entranced by the "bad-boy" male, who seems to be the epitome of masculinity, but is really a poor choice for a life partner.

Perhaps all of this explains why people don't have Biden signs in their yards, or Biden bumper stickers on their trucks - or wear Biden hats.   I know from my own experience, I just don't need the hassle from the MAGA-hat wearing people.  It's bad enough today if I wear a mask in a store and get dirty looks from the Trump faithful, even as the pandemic rages.  It's getting to the point where it isn't worthwhile to leave home.  Perhaps that is by design.

Maybe it is the children of these failed marriages who have taken on this ersatz definition of maleness. Growing up with "Weekend Dad" who runs down their Mothers (and all women) as "materialistic bitches" has perhaps imprinted an entire generation.   The message imprinted into today's youth is clear:  Being a man means being insensitive, selfish, and grabby.  And with that profile, who comes across as the Übermensch? Yea, Donald Trump - a man who uses and tosses aside women like they are possessions. A man who grabbed all the money he could in life and does what he wants.  Shit-yea!  That's what I'm talking about here!  A real man.  Yee-haw!

That's how we ended up with Trump, at least in part - an entire generation raised with Daddy Issues. Men and women alike, all looking for a strongman to take charge, but not a Mother telling them to clean up their room and do the dishes.  That's just nagging, like Michelle or Hillary would do - "telling us what to do" as they put it.

I think in order to avoid this trap, we need to redefine what it means to be masculine and male in our culture.  Perhaps the current aberration is a result of the progress we have made - where women and minorities have made advances and we have tried to become a more empathetic nation and people. Perhaps we need to look back at the male role models of the past to see what we have lost. You watch old episodes of "Mayberry RFD" and you don't see Andy Griffith reaching for a shotgun to solve every situation that comes down the pike. He used a little common sense and his understanding of human nature to disarm situations before they got out of control.  He was firm, but also kind and gentle. And no one ever accused him of being effeminate or gay.

Of course, come to think of it, there were never any black characters on that show.  Well, one, I guess.

Even the action heroes of the day back then had a human side.  Sure, they were willing to fight for what was right, but not the ones to throw the first punch.  There was a moral code of ethics back then - that men - real men - behaved in a certain way.  They treated women with respect, looked out for those weaker and less fortunate than themselves.  It was only the bad guys who disregarded the male code of honor.  And usually, despite their propensity for violence and wrongdoing, the bad guys were usually seen as being underlyingly weak and unmasculine.   In fact, the bad guy was usually seen as a coward and perhaps even gay.

In the James Bond movies, the evil villain has an army of henchmen and lives in an underground lair, usually in a hollowed-out volcano.  When the cavalry arrives, he is usually the first to shoot his own troops in the back, while he ducks out the back way, an utter coward, escaping in some sort of escape pod or another.  Perhaps that is Trump's plan at the end.  Pull the self-destruct lever and then escape down the Potomac in his underwater Bath-o-sub. 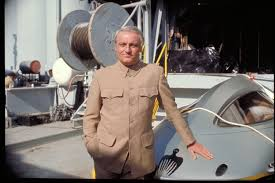