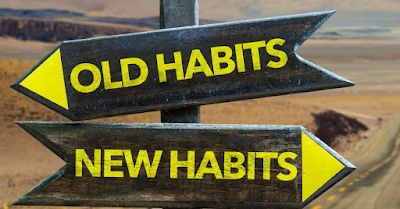 People fall into habits - and then fall right back out of them again.

We went into town the other day - a big day for us, leaving the island and all.  Mark has a show in February, and we needed some supplies for that, as well as a few grocery items.   Ordinarily, this would be an opportunity for us to stop at our favorite run-down Mexican taco joint and have a few beers and some tacos carne asada, but we haven't been to the restaurant since the Corona Virus took hold.  Well, we went early on, but this is the most dangerous time right now - right before vaccination kicks in.  The rate of infection is at an all-time high, as is the rate of mind-infection of mask protesters.   Hopefully, in two or three months, most everyone will be vaccinated and this nightmare will end.  I said the same thing 12 months ago and I was wrong, though.

But I wonder if things will go back to "normal" in a real hurry.  We had lunch before we went to town, and we thought about getting a coffee to share on the way back, but thought better of it - after all, we splurged $10.83 on a new coffee maker, why spend half as much to buy one cup at a store?

Not only that, but it just seemed that everything we saw at the stores was.... expensive.  It is not like the gas shocks of the 1970s where gasoline doubled in price nearly overnight.  It is just that everything seems just a little bit more expensive and I don't remember prices being so high.  Funny thing, too, every store on the planet is tearing itself apart and completely reorganizing how the stock is laid out, from grocery stores to home improvement stores, to hobby stores.  What's up with that?  Also, a lot of things seem to be out of stock these days.  It is like a time-warp to the 1970's where peanut butter and coffee were rationed.   What's next?  Ration stamps?

Of course, it could be that prices haven't changed that much (although, they have) but that my perceptions have changed.  In the back of my mind, I am thinking that a recession is coming and that I should marshal my assets and cut back on spending.  That may be the other half of it.

But there is a third thing going on here, and that is how habits change.  When I started this blog back in the dark days of the last recession, businesses were hurting as people cut back on spending.   Folks were trading in their gas-hog SUVs for small sedans.   Restaurants were offering dollar meal deals.  It all lasted about two or three years before the price of gas dropped and people stopped being so nervous, and sales of SUVs and pickup trucks took off again, and the "dollar deals" were quietly dropped.

There is hysteresis in the system, of course.  People keep spending as before, even as they lose their job.  I saw this firsthand the last time around.  A friend of mine lost a six-figure job and it took them three years to realize that they weren't going to get another one.   Oddly enough, they took a job that they thought was "beneath" them and worked their way up and are back in six-figure territory again.  But in the interim, it was interesting to see how they coped.  At first, they did all the same things - the wife stayed at home and didn't work.  They kept the cleaning service and the lawn service.  They ate out in restaurants several nights a week.

But as the weeks of unemployment turned into months, well, they started cutting back.  Why hire a cleaning service when you are both at home all day long?  Why hire a lawn guy when you are sitting in the house watching him mow the lawn?  Why eat out at a restaurant when you have a kitchen at home?  The "too tired to cook" excuse seems kind of slim when you have no jobs.   And the wife went back to work, eventually, which helped tide them over until he found a job.

Once they were both working - and making good money - the old habits slipped back in, slowly over time.  I am sure the lawn service is back, along with the cleaners.  We all do this, too - I am just using them as an example, not criticizing.  It is what it is, human nature, and we have to confront that.

Which brings us to our current situation.   Restaurants are finally throwing in the towel and reorganizing under Chapter 11.  Some are merely closing selected locations.  Others are closing for good.  You can't go for eight months with no customers.  Will this turn around in a hurry once the crises is over?  Maybe.

Maybe in three months, once we are all vaccinated and the infection rate drops off the charts (and the virus hasn't mutated to be vaccine-resistant) people will flock back to Disney World and the cruise lines, and vacation resorts - and return to restaurants and bars.  One thing this epidemic has illustrated is that people basically lose their minds in isolation, something anyone who has been in or worked in, a prison can attest to.  The worst torture devised by mankind is solitary confinement.

But I wonder if this will be the case.  First of all, there will be no "Olly Olly Oxen Free" - with everyone leaving their homes at the same time to rush back to be first in line at the Ole Country Time Buffet.   It will be a very gradual thing, I think, with no one day being marked as "end of virus" day.

I just know from a personal perspective, that my habits won't be changing radically in the near future.  In response to the last recession, we started shopping for groceries at Walmart and were amazed at how much lower the prices were and how great the selection was.  The other day we went to Publix to get a birthday cake for a friend - something Publix can do that Walmart can't.  We were kind of shocked at how high the prices were compared to Walmart. Sometimes you have to go back to realize how much you use to be spending!   The point is, ten years after the last recession, one habit that hasn't changed at all is shopping at Walmart.   I doubt we will be going "back" to shopping at Wegman's and not looking at prices - those days are gone for good.

There are quite a few people still recovering from the last recession.   According to some sources, as much as 10% of the housing stock was "underwater" as recently as 2018.  I can say that personally, our house is just now worth more than we paid for it, nearly 15 years ago - and that's not counting the improvements and maintenance we have had to do to it.  Thank God it's paid for at least.   The point is, again, hysteresis - effects of economic booms and busts take time to sink in.

Of course, I believe that expanding spending is a lot easier to do than contracting, which is a good reason not to expand in the first place.   And that is an old saw from long before my time - it is a lot easier to expand your lifestyle than contract it, particularly when you have signed for long-term commitments like 30-year mortgages on mini-mansions or worse yet, a time-share.  If you lose that six-figure job right after signing the papers on an expensive house, well, things get ugly really fast.  I saw this happen to my parents, when I was four years old (yes, I do remember everything).  It wasn't pretty.

That is why is pays (literally) to bank any raise in pay into a 401(k) or other savings account, rather than let the money slip into your lifestyle and expand your personal overhead.  It is temping, when you get that raise or new job, to stop by the car dealer on the way home from work.  Yea, I say this from personal experience.  My bosses were always happy when I signed a car loan.

Of course, I could be wrong about this - I typically am.  Maybe there is such a "pent up demand" that people will go nuts this summer and the cruise lines will be booked solid and Disney World will be overflowing with people, including little snot-nosed children sneezing on each other.  Maybe there will be lines around the block at the local chain restaurant, as people rush back in to get their fill of lite beer and stuffed potato skins.

Or, maybe, having learned to live without these things for so long - or having learned how to make them at home in their new air-fryer, they just might not be in such a hurry to go back.  I think personally, something along the lines of the latter, although I don't own an air-fryer and have no desire to.