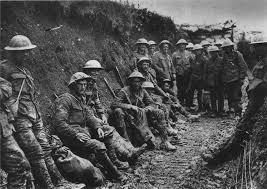 After a major war, there is usually a post-war recession.  We are in a major war.

After World War I, the world was plunged into a major recession.  The reasons were many - much of the infrastructure in many European countries was destroyed.  A generation of young men were killed.  The economies of the countries involved had switched to a war economy and it would take time to revert to a civilian, consumer-based economy.  Almost every war good made is unsuitable for the consumer economy.  As we found out after World War II, leftover bombers made poor passenger planes, old Jeeps were ill-suited for modern roadways.  And no one commutes to work in a tank.

After World War II, there was recession in Europe and Japan, although rebuilding those economies soon pulled the countries out of recession.  In the US, undamaged by enemy attacks, other than Pearl Harbor, returning GI's wanted jobs, cars, and houses - all of which were in short supply.  And of course, just as after World War I, governments had staggering debts to pay off from the war - which is what drove the UK to near-bankruptcy and losing its "empire" status.

The recent pandemic has been like a war.  Without the pandemic, we likely would have seen a major recession in 2020, after a ten-year bull market - thanks to Barack Obama.   And no, this isn't up for discussion or dissemination.   The slow-growth years of the Obama administration are starting to look really good right about now.  This idea that a steady-state economy is a bad thing needs to be put down.  Wild gains in the market and wild expansion are always followed by wild retractions - and the people in-the-know who have money, end up making lots of money in these bi-polar markets, which is why they pine for them.

In the fall of 2019, RV sales were way down - by double digits.  Car sales were slacking off and all three US automakers were offering "employee pricing".  Fiat-Chrysler, continually looking for suitors (and finally finding one in PSA) had huge parking lots near my home, filled with trucks, jeeps, and minivans.  Today those lots are empty, but not because Fiat-Chrysler is selling more cars, only that they are producing less.

When the Corona Virus hit, we all thought it would be over by summer.   It was not to be.  Car companies shut down for months, which sucked up all that excess inventory.  Faced with no place to vacation - no cruise lines, no airline flights, no theme parks - people started buying RVs in record numbers, often at very high prices.  Camping gear flew off the shelves.

Forced to stay home, people started really looking at their homes, and started a home-improvement binge.  The aisles of Home Depot and Lowes were crowded.  The fellow I sold my old truck to, who does home improvement work, told me his phone doesn't stop ringing - and that there are months-long delays to get things like windows and doors and storm doors and other home improvement items.   I go online to find a replacement for our 20-year-old soft tub, and the manufacturers are telling us delivery is in 30 weeks!  It is like wartime, but not with tanks and guns.

But all is not well.   Many people are being laid-off.  Some smaller restaurants are closing.   The government is propping-up the economy by printing more money and extending unemployment benefits to the point where some people are making more money not working than working.   Many companies are hiring - posting job listings that are unfilled.  It is an interesting economy - it almost feels like an economic boom, in some respects.  At least the stock market seems to think so - recovering to its pre-pandemic levels and then some.

But, there are some ominous issues on the horizon.   Those cruise ships are still not running - or just starting to go back to work, in a limited sense.  Not many people are clamoring to go.   As foreign-owned companies, the pain and suffering are not seen here in the US.  Most of the employees are from third-world countries, other than the officers and managers and entertainers.  So we don't hear how awful it is that the remittances going back to Central America, the Caribbean, or Africa, have dried up.

Some big businesses are struggling.  Boeing has tried to "go it alone" by issuing more debt and selling more stock.  But that capital should have been spent developing the next generation of airliners, and not in propping up what is now clearly a failed product - the 737 MAX.   Even without the pandemic, Boeing stood to lose billions over these planes.  Airlines are hurting as well - and are logically using the pandemic as an excuse not to take delivery of already-built planes, which are starting to rot in storage.   Machinery doesn't like to sit, and Boeing is discovering that these planes will need more than just the "fixes" mandated by the FAA to get back in service.  Frankly, I don't see how Boeing can not go bankrupt over this.  I mean, even Airbus is struggling, and they don't have half the problems Boeing does.

Small businesses are hanging in there with "payroll protection" and forgivable loans - for now.  But of course, our President has held-up the extension of these plans in a last-minute hissy-fit (after not only agreeing to the earlier terms, but demanding them).  He wants to appear as a hero - or perhaps strategically divide Republicans and Democrats, preventing them from over-riding his veto of the budget, CoVid relief, and the defense authorization.  Compounding this, moratoriums on eviction, foreclosure, and student loan repayments are set to expire - and will likely expire in 2021 anyway, even if renewed for the short term.

And then, all this money we have been borrowing to keep the economy afloat, will have to be paid back.  That is the fundamental problem - we've borrowed against the future to stay afloat today.  With today's super-low interest rates, maybe this debt seems manageable today, but what happens if interest rates climb again?  And with all this money in circulation, we will see inflation over time - and in fact are seeing it now.  It seems like everything is just a little more expensive than just a few months ago.  Consumers, eager to get some products at any price, are paying whatever it takes to get personal protection supplies, toilet paper or whatnot.

Meanwhile, Wall Street is having an orgasm.  I have noted time and time again that an IPO today isn't an opportunity to "raise capital" to expand a business, but a chance for insiders to cash out.  Sadly, no one listens to me, and a new generation of "Robin Hood" investors (lead by a guy from a sports betting site?  WTF?) are thinking this investing deal is like shooting fish in a barrel - every stock goes up!   Back in the 1990's two guys in jester hats went on television and said the same thing - buy stocks!  They always go up over time!   Two market crashes later, we learn that, yea, in general, stocks go up over time.  But not all of them, not all the time.  You buy the wrong stock (or commodity) at the wrong time, and you can lose your shirt.  Buy using options, you can lose more than you gambled.  And that is what this sort of "investing" is - gambling.

Again, slow and steady markets, based on rational thinking, profits and dividends, are no fun at all.  What the folks who have money (or who want to make a lot of money) really want, are wild markets that go nuts, and lots of naive small "retail investors" who will throw money at just about anything, convinced they are going to strike it rich.  We saw this in 1929, we saw it in 2008, we will see it again and again, if we don't learn.  And we never learn, it seems.

Is it going to happen yet again?  That is the question, isn't it?

This is indeed an odd time in human history.  A pandemic is raging, and a President is contemplating declaring martial law to ensconce himself as dictator-for-life.   Sales of nearly everything are down, companies are going bankrupt, people are facing eviction and foreclosure, and many have lost their jobs.  Meanwhile, the stock market is going bonkers, and everyone is convinced that recovery is right around the corner, and a whole new era of sketchy IPOs is on the horizon.

Yea, it is going to happen again.  And I think we will see a "Post-war" recession in 2021 as the Corona Virus is eventually conquered, and the world tries to go back to a "normal" economy.  The change of gears, however, will cause disruption.  Patterns of behavior today will change. The mask-making company that is banking profits will find itself with inventory it can't sell.   The backlog of evictions and foreclosures will dump houses and apartments on the market.  People losing their unemployment bonuses and stimulus checks will find it harder to make ends meet.   Young people will have to start paying on their student loans - discovering that the debt is still due, now with months and months of compounded interest added.  It ain't gonna be pretty.

And governments, already tapped-out by printing stimulus money, won't be able to prime the pump further.  Obstructionist Republicans will dust off their "debt clock" and stymie any further deficit spending, anyway.

Welcome to the Biden Recession.  And you know that's what they are going to call it - and blame it all on Biden.  Maybe that is another reason why Trump is holding out for a $2000 stimulus check - to further "goose" the economy one last time, so people will remember how great things were in January when they had money to spend - and how much they sucked in February when the bills became due.

People are hoping that 2021 will be better than 2020 - and that we will put the ugliness of the Trump era behind us, and no longer live in fear of a virus, and that the economy will recover.  Sadly, I think at the very least, we will see a recession.  At the very worst, none of these three things will come to fruition.