What a Fool Believes - Part II 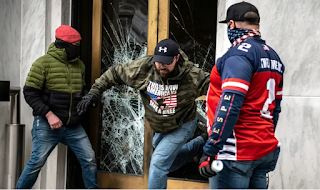 Belief is evil - I am convinced of that.

I had an odd dream last night.  A flying saucer had landed, and we were part of a team investigating it.  We went onboard, and took it as a good sign that the aliens had left the thing unlocked.  We were looking around inside at the alien artifacts and waiting for their return.  When they did, for some reason, I warned the others by saying "Hey, Hey Hey!" as in the Fat Albert cartoon (it was a dream, it need not make sense) and at that point, Mr. See woke me up, because I was shouting or something.  Weird dream.

It got me thinking, though, about aliens and belief in mysteries in Area 51, conspiracy theories, and assassination theories.  And it hit me why so many of the MAGA-hat doofuses and Qanon people believe these wild election fraud theories - they fit their preconceived notions about other conspiracies.

Trump talks a lot about the "Deep State" and to me, this means the entrenched career bureaucrats who run the day-to-day workings of the country and don't change much, regardless of who is in office or what new policy comes down the road. I recall when I worked at the Patent Office there was some new court decision, perhaps about software Patents, and the PTO position was to do things "business as usual" - which struck me as odd.  Shouldn't we alter our procedures in view of this new court case?  "Courts change their minds," one supervisor told me, "why rush into things?  If someone objects, they can appeal it!"

And indeed, the courts changed their minds - several times - with regard to software and business-method Patents.  So maybe the "Deep State" had it right.  Maybe this flywheel of inertia in the government is a good thing.  It is like Trump's "martial law" ideas.  If he tried to enact it, the Pentagon could just cite logistical delays until January 20th, at which point the whole thing would be moot.  "Sorry about that, Mr. Ex-President, but our tank was out for repairs and new treads were on back-order!  Better luck next time!"   Inertia can be a handy thing.

But then I thought about the movie "Independence Day" which is one of those explosion end-of-the-world movies about an alien invasion.  In one scene, the President is brought to "Area 51" where he sees a captured alien spaceship (from many years ago) and bodies of the aliens retrieved from it.  The President is aghast.  "Why didn't someone tell me about this?" he asks.  "It was a need-to-know basis," one of the scientists replies.  The audience hoots with laughter - because "we all know" that the "Deep State" is really running things and that Presidents are mere figureheads who are out-of-the-loop.

Well, that's the story that some people believe, anyway.  So it dovetails nicely with these Qanon and election fraud theories.  Of course, the secret cabal is fighting the "Deep State" - which in turn is running a cannibal pedophile ring out of a pizza shop.  It's all in code!  Macaulay Culkin orders a "Cheese Pizza" in Home Alone - and "Cheese Pizza" is "CP" or code for "Child Porn!"  Connect the dots, people!  Do you think it was just a coincidence that Donald Trump did a cameo in Home Alone II? Of course not!  Well, unless you are one of the sheeple who hasn't seen the light!

I was looking at my YouTube channel and saw I had a slew of "comments" awaiting moderation.  I don't do "comments" here or on my channel for obvious reasons.  One of the comments, in response to one of my "Hidden Jekyll" amateur videos, was from "The_Truth_Seeker" and wanted to know about Indian artifacts and giant skeletons dug up on the island - all on display in our museum!  I deleted the comment.

You see, I saw that video he got that from.  It is an animated GIF file of a campfire on a river bank, not from Jekyll Island. It just loops for 30 minutes while a guy drones on about the Federal Reserve, JP Morgan, and giant skeletons. It seems the paranoid theories about the Federal Reserve have gone supernatural.  The reason the Federal Reserve was founded on Jekyll Island was that an alien spacecraft crashed here ages ago and giant lizard people lived here - skeletons of which are only now being found!  You see, complicated technology like the Pyramids or the Federal Reserve are too complex for human minds to conceive of, so of course they were invented by alien lizard people, who run the "Deep State!"  Connect the dots, sheeple!  Why do you think there is a pyramid on the one-dollar bill!  (and a beaver on the Canadian nickel?)

The reality is, JP Morgan encouraged the government to form the Federal Reserve, as he had personally bailed out the economy several times during stock market panics - you know, back in the days of the gold standard, when the economy was stable.  He realized that eventually he would die and the next guy to take his place might not be so nice - not that JP didn't profit handsomely each time he helped out America.  And for the record, the Federal Reserve can't "take away your money" when you don't have any to begin with.  And when you give away your money to banks, they aren't "taking" from you, you are pissing it away in interest payments for crap you don't need - like survivalist supplies.

Anyway, I noped out of that.  No, there are no skeletons in our museum, other than that of an old Studebaker for some odd reason.  Displaying Native America skeletons is deemed unsavory in this new politically correct age - most have been returned to the First Nations Peoples for proper burial.  But it is OK to dig up mummies and show them off - the correct time period for decency is about 3000 years, I guess.  So we won't be digging up dead Presidents anytime soon and putting their corpses on display, despite some folks best efforts.   But there are no skeletons of any sort in our museum, as none have been dug up on the island, giant or otherwise.  It is just bullshit conspiracy theory videos made by someone who has never even set foot on this island.

But this got me to thinking - a dangerous pastime, particularly at night - that one reason why these folks believe Trump's lies is that, outrageous as they are, they fit their existing narrative about the world - a narrative based on belief and not on facts or logic.  Sure the election was stolen by the Deep State!  They are the same folks who had Kennedy killed, faked the moon landing (after all, the earth is flat) and are running pedophile pizza rings!  It all coalesces into one big bucket of crazy.

And this made me think.  I had been sitting on the fence, for the most part, about belief.  I had waffled a bit and supposed that belief could have its uses - to make people feel better about themselves or the world, or their impending death (which is impending, on a galactic scale of time, for all of us, always).  But now I am less sure.  Belief is evil, even so-called benign beliefs like religion and whatnot.  After all, how many wars were started in history based on religion, or more precisely, how many little people have been conned into giving up their lives for someone else's cause, based on religious trappings?

People won't lay down their lives - or that of their children - for your monetary causes.  But tell them it is for God and they will march off to their deaths, singing your praises!  Pretty neat trick.  And it still works today - people are posting messages on Parler claiming they will lay down their lives for Trump's insurrection - as soon as he gives the word.

Modern mythology, of course, has a modern feel to it.  Maybe back in the days of the New Testament, you could wow the rubes with tales of healing the sick and walking on water.  And in the Old Testament, maybe stories about "A wheel within a wheel" or burning shrubs were pretty fantastic, as the wheel and fire were recent inventions.   Maybe a testament for today would have visions of an iPhone within an iMac, within a Tesla, flying through the sky - that would rile up the plebes!   But maybe things like alien conspiracies and Scientology (am I being redundant?) have already beaten us to the punch.

Belief is evil - all of it.   It replaces skepticism with blind faith.  It replaces logic with illogic - reasoning with temper tantrums.   People act all shocked about pedophile priest scandals, but if you think about it, it is the logical result of putting all your faith in an institution which seemed designed to facilitate such practices.  I noted before that as a child in a largely Catholic town, we boys all knew the score about altar boys and priests - and this was long before we reached puberty.  For some reason, the general population became alarmed by this only in recent years, even if it was joked about for decades.  Faith and Belief blinded us to the obvious.

And maybe that is why the Catholic church made sex so taboo for so long - so that it could be kept underground, swept under the rug, and that people would be too ashamed to come forward.  The sexual revolution didn't lead to the situation we have today - it only exposed it.  Today, with the veil of shame lifted, we realize what horrible things people did to each other, only a few decades ago.

But I digress.  I think, anyway.

Belief serves no good purpose - in my mind.  I wrote before that it could be useful in keeping stupid people hard at work.  Old Cletus living in the trailer gets up every morning and goes to work to earn a living, because he believes that God wants him to do this.  Without this moral compass from without, he would rape, pillage, and plunder - without having to leave his trailer, in part.  Religion and belief keep people on the straight and narrow, and this serves a value to society.   And perhaps that is - or was - true.

But today, these same folks are up in arms - quite literally - and ready to overthrow the government at the drop of a (MAGA) hat.  Give them the word, and they will break down the doors of the legislature and kidnap the governor.  Belief has been turned on its head - not to preserve the peace but to disturb it. They truly have "released the Kraken" this time.

Maybe this is cyclical - and that belief will eventually go back to being a benign thing, or even a positive one.  Perhaps if some religious leaders tried to disarm this bomb before it goes off, we will be safe.  Maybe.  Maybe not.  Today's "religion" isn't preached from the pulpit in a church, but exists in a hazy online world of conspiracy theory websites, discussion groups, far-right news sites, and YouTube channels.   This is the new religion, and what Pat Robertson or other mainline religious leaders have to say no longer has any meaningful impact.  The followers have new beliefs, new churches, and new church leaders, who are often nameless or anonymous or Q-anonymous.  We have no idea who these people are, or what their agenda is.

Well, maybe we do - but that is dismissed as conspiracy, despite all the evidence.