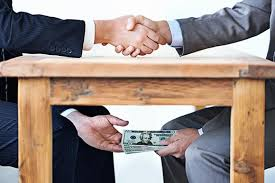 For some weird reason, Trump is trying to buy our loyalty with $2000 checks.

2020, a weird year, is ending on a weird note.  Three "must-pass" bills were put before Congress, and in a rare show of bipartisanship (yes, it exists, when the shit gets real) they were all passed, as two bills, one to fund the military, and another combined Covid relief bill and government funding bill for 2021.  Both bills were what the Trump administration asked for and what both parties could agree on.

Trump has threatened to veto both.  What the heck is going on?

The sticking issue isn't the money.  Indeed, the Trump administration wasn't in favor of the $2000 relief checks to begin with.  By switching loyalties on this issue at the last minute, I think the Trump administration is trying to do one or more of three things. First, it is just a temper-tantrum Trump is having.  Someone puts a bill in front of him, and he pouts and says "No!" because signing it is what is expected of him, and he has found that doing the opposite often gets attention and gives him some sort of leverage.

Second, it is revenge for alleged slights by Republicans, for refusing to go along with his crazy conspiracy theories.  By the way, the FBI just completed the "signature audit" in Georgia as Trump requested.  Total tally of "fraudulent votes"?  ZERO, Zilch, None.   Oh, well, that will never stop a conspiracy theorist - they will just allege the FBI is in on it now.  Oh, wait, they already are.

Third is perhaps the chance to suck-up to Americans by positing himself as the CoVid Relief Hero, handing out big checks, when those Mean Old Republicans wanted to hold back.   Maybe he felt this would boost his falling poll numbers, or perhaps help out when the eventual Coup attempt is made.

But there is a fourth reason, and it has to do with Social Media.  Social Media companies and any online forum (including Blogger) were granted limited immunity from liability due to the content posted by users, such as me.  If this immunity didn't exist, companies like Google or Facebook could be sued for libel, copyright infringement, or whatever, for actions taken by one of their billions of users.   Lawyers would love this, as a "deep pocket" is an attractive target.   If someone makes a Facebook posting libeling someone, there isn't much the libeled person could do - under current law - other than to request the posting be taken down.

If this "Section 230" is repealed, well, the libeled person could then sue Facebook directly, which in turn would force Facebook to more closely monitor the content that users post - an exorbitantly expensive proposition as nearly every posting would have to be vetted, and as a result, the cost of operating even a basic social media website would be stratospheric.  Every posting would have to be moderated and vetted.  You couldn't just go on Twitter and say outlandish things, for example.

At first, this makes no sense at all.  And at second and third.  After all, Social Media is what created Trump.  He lives and dies by the Tweet.  The conspiracy theories he fosters all fester on places like Facebook, Twitter, YouTube, Instagram, and whatnot.   Dominion Voting Systems is poised to sue major news media outlets for propagating slanderous lies about the company.  Can you imagine how things would be if they could go after Facebook and Twitter as well?

The first account that Twitter would take down would be Trump's.   It makes no sense at all that he wants to repeal section 230.   It is little more than an act of revenge - and perhaps an admission he lost the election.   This time around, the social media companies were less of a lap dog to Trump's whims.   Back in 2016, he and his followers could publish outlandish things and get away with it.  Facebook felt above the fray and realized that the crazy posts generated the most hits (and that the people who follow conspiracy theories are not very bright and thus prime fodder for "One trick of the tiny belly" Facebook ads).

But in 2020, it seems the Social Media companies - or some of them at least - developed a conscience and realized that they wielded an awesome power, or more precisely, failed to wield it.   This time around, false statements were labeled as false.  And in the post-election cycle, Trump's wild claims of fraud were labeled as such.   This didn't help his re-election bid much.  Worse yet, they tweaked the algorithms to prevent false stories from being retweeted as much as in the past, and to limit their exposure.   Sites like Reddit finally shut down rabid Trump subreddits, as well as blatantly racist groups.  They also tweaked algorithms to prevent brigading and other techniques to push obscure posts to the top of the Reddit cesspool.  If you perused "r/all" on the eve of the 2016 election, all you would see is Trump, Trump, Trump.  You might actually think he was popular.    In 2020, it is all cute cat videos.   They definitely changed the algorithm there.

Abolishing section 230 would not help Trump much, but be more of an act of revenge.  He would leave office and no longer need Twitter, but Twitter would be swamped with lawsuits galore.  Given that the company is now just become profitable as it is (and recently went negative), the increased cost of moderating every single Tweet as well as litigation costs, could arguably put it out of business.   Think about it - would people Tweet if they had to wait 24 hours for a Tweet to appear?  It could take that long for moderators to validate each entry.  The backup would be worse than Polish truckers at Calais during Brexit.

There is another possibility, of course, and that is horse-trading.  Trump often holds out for weird things that make no sense, until you realize he is basically holding something you want, hostage, until you give him something he wants - his idea of the "art of the deal".   So he holds out for Section 230 repeal, even though perhaps he doesn't really want that.  Perhaps it is just a threat against social media companies to get them to stop flagging his Tweets.   He isn't hoping to do a deal with Mitch McConnell, but Mark Zuckerberg.  Perhaps.

Or perhaps he is just off his fucking rocker.

Why mainline Republicans don't want $2000 stimulus checks can be seen at any major retailer.  Prices are skyrocketing for goods, as more money floods the market.  Just as easy student loan money made the cost of a college education skyrocket, so is the flood of money into the market in general causing the cost of everyday items to jump - or in some cases, end up in short supply.  Trump's tariffs aren't helping much in that department, either.  Free money sounds great, until you realize it wipes out your savings and that free money is worth what it cost - nothing.   $2000 checks sound nice, until you realize that next year, that won't even buy you a coffee at Starbucks.   Hyperinflation isn't pretty.

On the bright side, however, recent votes in the House and Senate show that, when push comes to shove, Democrats and Republicans can work together to pass legislation, when it really matters.  And if they over-ride Trump's veto on the defense bill, it may be the icing on the cake for Trump's final humiliation - and a sign that the Republican Party has a life beyond Trumpism.

Maybe.  Maybe not.  The next three weeks could change the world.  We could see marital law, or perhaps a smooth transition.  We could see a spectacle when Congress meets to confirm the electoral college vote.  We could see the GOP  renounce Trumpism.  We might even see the Democrats take the Senate.   It is an exciting time - at a time when most people are tired of excitement.  Exhausted, in fact.