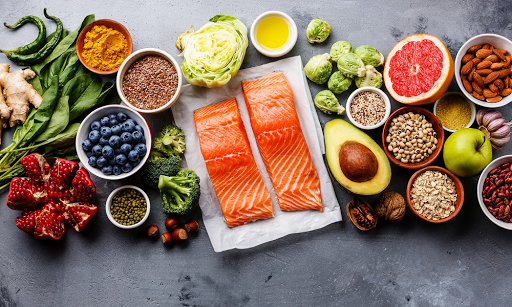 The best foods are the simplest foods.  Being a gourmand doesn't mean throwing dozens of ingredients at something - in most cases.

There is a misconception among a number of people that "fancy food" is difficult to prepare and requires a lot of ingredients.  For the most part, this isn't true.  Other than some curries from India that use a panoply of spices that are carefully balanced with one another, most cuisine is remarkably simple.  In fact, much of very fancy cuisine is down to two or three ingredients.  Order the most expensive thing on the menu - lobster.  They bring you two ingredients - a lobster and some butter.   That's it.

A friend of ours works as a spokesperson for the Vegetarian Society. She used to joke that so many "vegan" recipes call for so many ingredients. "You gather together 20 ingredients, spend two hours cooking them, and it still tastes like crap!" she joked.   And there is a nugget of truth to that.  The best vegan meals are often the simplest ones - and ones that don't try to mimic other foods, particularly meats, or try to hide the source food items under a mound of complicated sauces and a dozen spices.

Much of what we today consider cuisine was developed due to necessity.   Either the chefs had to "make do" with ingredients on hand, or poverty forced people to eat things that otherwise were deemed unappetizing, and in some cases, inedible.  Many spicy foods were developed to disguise the taste of unrefrigerated meat, which went South pretty quickly back in the day.  Much of French cuisine is based on making something-from-nothing - using part of an animal that otherwise would be discarded.

So many people are afraid of cooking, convinced it is some complicated deal involving dozens of ingredients, long cooking times, and dozens of dirty pots and pans and utensils.  Anything less just isn't cooking!  But that really isn't the case, and if you find yourself with a dozen ingredients on the counter while preparing a meal, perhaps something is wrong.

I fall into this trap all the time.  I make an omelette, and whisk a couple of eggs and just a touch of cream and then fry it in the pan.  How about some cheese?  Tomatoes?  Ham?  Bacon?  Mushrooms? Onions?  Before long, the omelette is a watery mess of ingredients, is about 5" thick, and falls apart when you try to fold it.  One or two or maybe three of these ingredients, tops, is all you need (and things like mushrooms, onions, etc. should be sauteed first to reduce their water content.  Sauteed is a fancy word for frying them in the pan, first).  Mark makes an omelette with just spinach and cheese, and it ends up being much better.  I have to resist the urge to put the entire contents of the refrigerator in the omelette.  I mean, maraschino cherries?  Bad idea.

But the best meals often contain only two or three ingredients, maybe four.  Simple things, prepared simply, are often the best.  On the other hand it is possible to take simplicity too far. Like I said, so many foods are based on poverty - a lack of good ingredients a hand - and an urge to dress-up poor ingredients or stretch them to feed more people.

Sadly, some folks think this is an abomination.  "The best chili is just meat!" they say, "no beans!"   Or they posit that meatloaf should be all meat.  Weirder still, they argue that using prime cuts of meat make for better chili or meatloaf.  I disagree.  It is like trying to hop-up your Mom's old Accord.  You can bolt-on all the accessories you want, it is still just a plebeian sedan - appreciate it for what it is, not what you think it could be.

So chili becomes a chopped-meat sauce - maybe suitable for spaghetti, but not really chili in my opinion.  And meatloaf becomes a slab of hamburger, which is OK, I guess, but not really very imaginative.  Once again, the desire to be gourmand or to expertize everything just ends up ruining everything.

It is funny, but we went to a chili cook-off in Natchez, Mississippi.  We stopped at a campground there and they said, "you here for the cook-off?" and we said "no" but were looking forward to good chili.  We didn't get any.  Turns out, they've turned this into a "thing" where people prepare these batches of chili (no beans of course!) just for the judges and that's that.  Nothing to see or do, but the smells were pretty good.  From what we understood, this was just one stop on one of the "chili circuits" where people compete to make chili, but no one actually eats any of it.  Just another example of people experting the shit out of something to the point of ruining it.  Probably put 100 spices in it, too.

It's like Ron White said - all you need is a goat and an onion.  And some beans, please!

Simplicity is the best in most cases.  You want to prepare a piece of fish, just batter and fry it.  Or broil it with a little lemon or something.  Adding more "stuff" on top doesn't always make the experience better.  Fresh steamed peel-n-eat shrimp beats made-from-frozen "scampi" any day.  Raw oysters with a little mignonette sauce beats fancy Oysters Rockefeller.  A simple hamburger or cheeseburger with one or two condiments beats these monstrosities with 500 things piled on top of them to the point where you can't even eat them.  Fancy "artisan" cocktails with seven ingredients are often worse than a simple martini with two ingredients - shaken until it is a frothy white.  And no, a "dry" martini with just vodka is not a martini - you're just drinking straight vodka.  Again, too little is as bad as too much.

Speaking of vodkas, what's the deal with flavored vodkas? Whipped Cream Vodka? Just drink something else.  Or these flavored beers that taste like strawberries or coffee or whatnot.  How about just make a really good beer made really well from three or four really good ingredients?  Sounds good, right about now.

I think that food is like life - simpler is better, up to a point.  Moderation is the key.  Making your life more complicated with too many ingredients isn't going to make it better. Yes, it was fun to have a vacation home and boats and "stuff" but like the ten-ingredient omelette, it was also a lot of work.  Ditto for the five-bedroom house.  Sometimes less is more.

And maybe there is a parallel to our financial lives as well.  Some folks think that complexity in our lives would be better - esoteric investments that are not well understood, but a "sure thing" to make us rich.  Chasing airline miles or coupon deals is just taking a simple transaction and making it more complicated than it needs to be.

Simpler is better.  Less is more.  But don't take it to extremes!