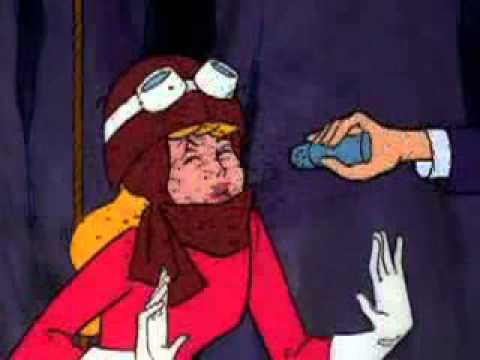 We were raised with a lot of tired old tropes with regard to food.  Food, we were taught, was dangerous and scary, unless it was safe and bland.


I was chopping garlic this morning so Mark could make a meatloaf.  He puts ground beef, pork, Italian sausage,and even bacon in it - among other things, of course!  And I got to thinking - which is dangerous, I know - how when I was a kid, garlic was viewed as something humorous or perhaps even dangerous.  Only stinky-breath I-talians put garlic in anything, and even the tiniest amount was "too much!"  How times have changed, at least for me personally.  From what I can fathom, though, it seems most Americans are still on the bland diet.

It struck me there are a host of tired old tropes about food, and as kids, we were fed these in the cartoons of the day.  What am I talking about? Well, these kinds of things:

1.  Ground pepper makes you sneeze:  In the cartoons, when someone wants to make someone else sneeze for some reason, they place ground black pepper up their nose or somewhere where they inhale it.  The message was clear:  Don't mess with that black pepper!   Dangerous stuff!  Only to be taken in tiny doses!

2.  Chopping Onions makes you cry:  Not just eye-watering, but when you chop onions, you'll become emotionally overwrought as well.  Sometimes, once in a great while, my eyes might water slightly when chopping onions.  As of yet, however, they have failed to make me reconsider my life choices.

3. Garlic is bad:  It makes your breath bad and doesn't taste good.  Only those greasy I-talians would like it!  Stay away from garlic!  Maybe a pinch of garlic salt now and then, but don't go crazy.

4.  Hot peppers are bad: In the cartoons, someone eats a hot pepper and they turn red or their body turns into a giant thermometer with the mercury zooming up to their head, where it explodes.  Spicy foods are just plain bad, bad, bad!  Stick with white bread and milk, kids!  Don't try those dangerous spices!

5. Hot sauce is dangerous:  The ladies auxiliary here on the island put together a cookbook in the 1970s, when the ladies-who-lunch did that sort of thing.  It is an interesting time capsule into what you could make with what little was sold at the IGA back in the day.  Back then, when you said "lettuce" you didn't have to specify what kind as there was only one - iceberg.  In some of the recipes, they call for hot sauce or Tabasco sauce - "two drops" in an entire casserole.  Way out there, I know!

There are many more, I am sure, and new ones are being coined every day.  One more recent trope on the Internet that I despise is the running joke about Hawaiian Pizza.   Only a apostate would put pineapple on a pizza!   It is sacrilege!   Well, calm down, bland-boy, and try something other than "meat lovers" pizza for a change.  Try a Hawaiian pizza with prosciutto ham and put some of those jalapeno slices on it.  Spicy and sweet go together (you have had American Chinese food, right?) and the result can be sublime.  But the gag has been going on for so long that I am sure a whole generation has never even tried a good Hawaiian pizza, but rather rejected it outright because of peer pressure.

They likely never had a good pizza for that matter.  The stuff the delivery guy brings to your door - it ain't pizza.  Loaded with cheese and meats, most have sodium content off the charts.  Maybe it is good in its own right, but whatever the heck cheese-stuffed crust is all about, it really ain't pizza.

So what's the harm in these old tropes?  Maybe nothing, but then again, stereotypes rarely are useful in real life.  They can prevent you from trying new and different and better things.   I know people, well into their 80's, who drink nothing but lite beer - and only a very specific brand.  I know people who think being a gourmand or as they call it, "foodie" is to express a preference and an insistence on Coke over Pepsi or vice-versa.   So sophisticated!

Of course, there is a little racism involved, too.  Like I said, those I-talians and their garlic - but also those Mexicans with their hot chili sauces.  Ouch!  They're too spicy!   Or those silly French with their soft cheeses!  Stick to good old American Orange Cheese or die!  Please give me a break.

I could go on and on.   Fear of Kimchi, the Korean staple.   Or Japanese sushi - referred to derisively as"bait" by know-nothings.  Or Indian food - again, "too spicy!"   Like I said, a lot of this is wrapped up in a delicious crunchy won-ton wrapper of racism and not-too-subtly, either.

I don't claim to be a sophisticate - my tastes are probably plebeian as well.  But I don't kid myself when I am having a corn dog that I am a sophisticate, even as I drown it in hot sauce.  The sad thing is, these tired old tropes prevent people from trying new things.  Even as some of these old tropes go away (I think the black pepper thing seems to have died a peaceful death) new ones, such as those about Hawaiian Pizza or French Cheese, seem to emerge.

Speaking of new tropes, there are two more I am not fond of. The first is the irrational idea that "real" chili can't have beans in it, and what's more, a chili made of nothing but ground beef is somehow better because it isn't "watered down" with pesky ingredients. If you just want to stuff your face with ground beef, be my guest, but don't call it chili.   Any idiot can brown a pound of hamburger and then pour ketchup on it.

The other one has to do with meatloaf or meatballs - the idea that putting breadcrumbs, rice or other "fillers" in a meatloaf is bad, because again, watering down the beef content.  Does the American beef industry actively promote these tropes?  Probably.   The reality is, like most of - if not all of - cuisine, these dishes were created out of necessity and poverty.  Chili was a way of taking some beef that was perhaps a wee bit past its prime, and adding spices and beans, and onions and peppers and whatever, to make it something more than ground beef.   Meat loaf wasn't just a way to bake a few pounds of ground beef to serve it, but to stretch the amount of meat with some fillers and to make it more flavorful with spices, onions, garlic and whatever.   Taking away those "fillers" doesn't make these things better, it makes them worse.

There is a trend in America to over-do things.   If 300 HP is good, then 700 HP is obviously better. Sometimes, though, it is more fun (and challenging) to drive a slow car fast, than a fast car slow.  If a quarter-pound cheeseburger is good, than a full pound of beef stacked so high that it would not fit in your mouth (and mostly end up on your shirt) has to be better.  The American tendency to "more of everything" sometimes means we end up with less.

There is hope, of course.   Since the days of my upbringing, the American diet has become more varied.  No longer is the lettuce section at the grocery store limited to one variety, but today has nearly a dozen or more.  We discovered Mustard comes in other colors than bright yellow.  Hot sauce, once viewed with suspicion, is embraced more fully - perhaps as a result of the explosion of chicken wings (I will go out on a limb here and decry "Teriyaki" wings as an abomination, or at least something other than real Buffalo-style wings, but again, could be good in their own right).  You even hear rednecks at Nascar talking about "summa that brie-cheese" or "that-there camel-bear".  Soft cheeses have made it to the trailer park!  What's next, tofu?

Let's not push it.  Although I tricked Mark's brother into liking smoked tofu by telling him it was a kind of smoked cheese.  And served sliced, on a cracker, it is pretty darn good.  His buddies who hang out at the local hardware store, told him that tofu was some sort of runny mess of white paste swimming its own juices, that only hairy lesbians and Hillary supporters would eat.  And he believed it.  People are so afraid - afraid to be different, afraid to try things.

Like I said, there is hope.  But please, for the love of God, let's put these tired old tropes to bed!
Newer Post Older Post Home