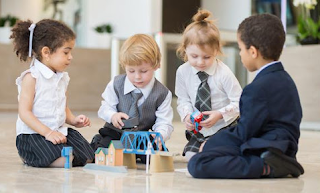 The downside to being a grown-up is that you're expected to know what the hell you're doing.

When I was a kid, we looked on with envy at grown-ups. Grownups could do whatever the hell they wanted to and were in charge of everything in our lives.  It didn't seem like it could be soon enough that, we too, could be grown ups and run our own lives and do what we wanted to do on a whim.  We all wanted to be like Uncle Carl, who always had a new sports car.  Why weren't our parents that fun?

We were too young to see the downside. Once you are a grown up, you are responsible for your own actions.  Back when I was a kid, this was particularly so.  Nobody had any sympathy for people who made stupid decisions in life, and they had to face the consequences of their choices.  Today, it seems like we're perpetual children, and everyone wants a get-out-of-jail-free card and a do-over when they screw things up in their own lives.

I was looking at an online site about full-time RVing. It was an interesting site in that it even had a link to one of my postings on the subject.  They said that you should spend about $250,000 on a motorhome and have at least $36,000 in savings before setting out (!!). They also claim that you could full-time RV on $26,000 a year (!!!).

The tone of the site was very upbeat and chirpy, and I wonder how many people looked at that site and talked themselves into this as an "inexpensive alternative RV lifestyle."   But what happens if things get bad in a real hurry and they find themselves behind the 8-ball?  What will they do then?   Amazingly enough, grown-ups - adult humans - don't think these things through.

What typically happens is that Dad gets sick - it's usually Dad, as men don't live as long. Suddenly, the idea of living in a motorhome when your husband has cancer seems kind stupid. Suddenly, the dream of RVing full-time is turned into a nightmare.   And yet grown-up people do this, not thinking that as you get older maybe you might become more infirm.  Oh, right, death is some oddball event that only happens to other, unfortunate people. The rest of us live forever. Grown-ups actually believe this, deep down.

Or they realize that there is no way you can "live" on $26,000 a year in a motorhome that gets 8 miles-per-gallon going downhill, or by staying in parks that cost $50 or more a night.   Maybe if you parked your rig in some trailer-park full-time... but that's not RVing, that's living in a trailer park.  When they realize it isn't what the folks on the RV website said it was (and such folks are never shills for the RV industry - are they?) they find out they are stuck - the RV is worth tens of thousands of dollars less than the balance on the loan!

But surely there's a do-over in this, right?  Someone will bail you out of this, perhaps the government? But the reality is, nobody will. You're a grown-up and you made grown-up decisions, now you have to live with them.  And it sounds so unfair and awful because, while it's not unfair, it is awful.

This got me to thinking how many people go to these chirpy and optimistic websites that tell you how great it is to have a jet ski or a motorhome or a fancy boat or whatever and that there are no downsides to these things. People sign up for these 20 year loans and don't think about the consequences.  And the people on these websites of course never talk about the consequences.  All they talk about is how fun and wonderful it is to be doing these things - and how inexpensive they are to do!

I recalled before how one "reader" chided me for being pessimistic about the cost of "full-time" RVing.  I pointed out that if you wanted to "See America" at 8 miles-per-gallon or less, it was going to cost a lot of money.   She replied that they spend less than $20 a month on gas (or some other absurd number) which would only make sense if their RV was parked all the time and they got around by moped.  People live in denial.

Maybe I am wired differently. Whenever somebody tells me something that sounds like it always comes out of my favor, I am always very skeptical. My short experience on planet earth has told me that usually these things end up sucking really badly.

I learned, in a short period of time that when something sounds too good to be true it always is too good to be true.  When people tell me things are going to be wonderful, they usually are lying to me. Maybe other people haven't had this experience early in life.  Maybe I should thank my dysfunctional parents for teaching me early on not to be trusting of my fellow human beings. Thanks Mom!  Thanks Dad! Your irrational behavior ended up saving me a lot of grief!

But others apparently live charmed lives.   When they meet a used car salesman or go to the RV or boat dealer, they assume the person they're talking to has their best interests at heart.   I guess that's probably why it's very tragic when they are blindsided by the downsides to these sort of deals.  After all, Mr. Smiling Car salesman was so friendly to them!  Isn't that how it is supposed to work?   People help one another out?   Well, maybe once in a while.  Not in commerce, particularly not in car and RV dealerships, for some reason.

On the other hand, we're grown-ups here.  We're suppose to know better.  When you invest money with Bernie Madoff or send money off to a Nigerian scammer, you're an adult and expected to know what the fuck you're doing.   While the rest of us might feel sorry for you for a millisecond or so, the other part of our brain kicks in and says, "what the hell were you thinking?"

Because deep down we know that if we did something stupid like that that's what people would say to us. We're grown-ups for chrissakes and we expected to know what the hell we're doing. No one gives us a do-over, an easy out, loan forgiveness, free college or whatever the fuck the Bernie Sanders people are proposing this week.

Maybe that's the problem with our country today. I noted it before that we have infantilized our entire population. People are chubby as babies and they sit in their little comfy chairs with their blankies and nappies and food that would be more appropriate at a six-year-old's birthday party, and watch their cartoons on television or movies based on comic books. Fucking Jesus Christ-on-a-stick, what the hell happened to our civilization?

We act like big dumb children, and then wonder why bad things happen to us.  Maybe we all need to grow up and grow a pair and take charge of our own lives and take responsibility for our own actions for a change.  What am I saying?  This is America!  We're not responsible for anything we do.  And our President is caricatured as a big overfed baby, because, well, basically that's what he is.   Nothing is ever his fault, someone else is always responsible.  He's the perfect candidate for America - telling Americans what they want to hear.

Trump is just a symptom of the problem, not the problem itself.  People who protest Trump, but at the same time want "loan forgiveness" are big babies criticizing a big baby - and the irony is lost on them.

They even have a term for this, these days - "adulting"- which is the act of behaving like an adult for a fixed period of time to get things done, before reverting back to the infantile state.   There was a time, believe it or not, that when you turned 18, "adulting" was a full-time deal. People weren't allowed or even able to - or even wanted to - turn off adult-mode on a whim.

It's a funny thing, in the rest of the world, people aren't given this "out" that they are given in the United States. People in third-world countries are assumed to know what the hell they're doing with their lives, even though they've had little or no education. They're not treated like big goofy children the way we are at the United States, because life in their countries is deadly serious and deadly adult.

Being a grown-up is great. You get to control your own life and make your own decisions. But this is a double-edged sword. You also have to take responsibility for those decisions. It seems like so many people today want a heads-I-win-tails-you-lose situation, where they can decide what it is they want to do, but not be responsible for the outcome.

That, in a nutshell, is the problem, both on a personal level, and a national one.   Maybe we can't change the nation, but we can change ourselves, by taking responsibility for our own decisions, rather than trying to foist the bad outcomes onto others.   In the long run, taking responsibility ends up being the more profitable route, rather than seeking bailouts - believe it or not!
Newer Post Older Post Home