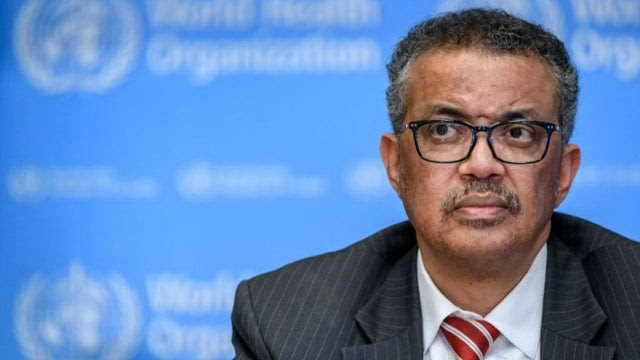 When liberal groups call for the resignation of the leader of the World Health Organization, then you know this isn't a "Republican versus Democrat" thing.


In the mail this morning, this alarming missive:

Tedros Has Failed Us on COVID-19:  AHF Calls for His Resignation within 72 Hours

Due to his gross mishandling of the COVID-19 outbreak, AIDS Healthcare Foundation (AHF) calls on Dr. Tedros Adhanom Ghebreyesus to resign from his position as Director-General of the World Health Organization (WHO) within 72 hours. Dr. Tedros’ severe missteps, including prioritizing political rhetoric over combatting the novel coronavirus, proves he is unfit to lead an organization that should be apolitical and transparent in fulfilling its mission as the world’s leader on global public health.

Dr. Tedros has increasingly relied on questionable information from China for critical COVID-19 decisions, resulting in him downplaying the severity of the outbreak in January; denying that the virus can be spread via human-to-human contact; delaying far too long in declaring COVID-19 a public health emergency of international concern and later a pandemic; and also delaying other important measures, including implementing travel restrictions to counteract further spread.

The WHO chief also went so far as praising China for the "extraordinary measures it has taken to contain the outbreak" after the regime destroyed samples of a sequenced coronavirus genome in late December, prohibited any publishing of the findings, and threatened and silenced doctors in an attempt to further cover up the virus.

"Dr. Tedros’ actions and comments relative to China, coupled with the incomprehensible delays in critical emergency declarations, are simply unforgivable – he must resign within 72 hours," said AHF President Michael Weinstein. "The World Health Organization should be the pinnacle for global health expertise and guidance, not a champion for political agendas during a pandemic that’s so far killed a quarter of a million people worldwide."

AHF’s call for Tedros to step down is only one of an increasing number of voices urging his resignation, including a number of U.S. lawmakers and an online petition that accumulated more than 1 million signers.

"The handling of this outbreak is clearly the most egregious misstep of Dr. Tedros’ tenure, but it’s by no means his only failure," added Weinstein. "The effects we’re experiencing surrounding COVID-19 are not only the result of his recent decisions—they’re also closely tied to the mismanagement of past outbreaks—most notably the Ebola crisis in the Democratic Republic of Congo. That, coupled with implementing superficial reforms within WHO that show no evidence of effective progress towards improving global public health, lead us to only one end – Tedros must go."

While Tedros should do the right thing and resign now, allowing WHO to move forward in the future when real reforms must be implemented, AHF does not support the U.S. decision to withhold funding from the WHO.

Interesting development, no?  And yet the New York Times and the Washington Post report that anyone who is against an "expert medical doctor kinda guy" is obviously a naive Trump supporter.  And therein lies the problem.   The media on both sides have politicized this virus thing, to the point where anyone who wears a lab coat (there's a hint for you there, Jared Kushner!) is deemed an "expert" and his or her opinions are sacrosanct.  Anyone disagreeing with lab coat guy is just an evil bastard who is trying to get us all sick.

Sorry, but that's not how science works.   To lay people, science means a guy in a lab coat who is an "expert" and therefor his opinion carries the day.  If two lab-coats disagree with one another, well, then the one with the most degrees from the most prestigious universities wins - or the most number of lab coats wins.

Again, that's not how science works.  The value of ideas are not based on who says them.   A moron saying the sun sets in the West is not "wrong" because a respected PhD says it sets in the East.  The idea belongs to no one and everyone at the same time, and its validity has to stand on its own merits - through testing and experimentation, not based on credentialism.

The media is all-too-happy to follow a different path, however.   The problem is, what do you do when the moron is right - once in a blue moon?  And I think you know which moron I am talking about here.   This is not to say the moron is usually right or ever right, only that ideas shouldn't be attached to a person, but stand alone.

Otherwise, you find yourself in the uncomfortable position of shouting down a truth, simply based on who is saying it.

I haven't followed the controversy regarding WHO and its spokesperson, but it is interesting, to me, that people on both the right and left are speaking out against this fellow.

Maybe there is some truth to it?  Nah - Trump said it first, so it must be wrong!
Newer Post Older Post Home