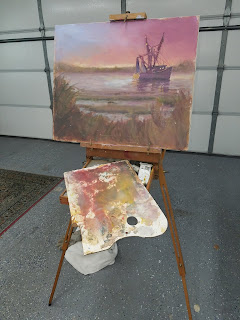 All the stuff you might do in life might not amount to much when you're dead, so be sure to enjoy yourself along the way.

We were passing by an abandoned house that had been sold and was being remodeled.  I mentioned before how people abandon houses, even here on a resort island - at least a half-dozen that I know of.  In some cases, children inherit the house and don't know what to do with it (sell it!) and instead have vague plans of "living there someday" and in the interim, pay property taxes, insurance, and utility bills costing thousands of dollars a year (over $10,000 in some cases) and let the place sit empty and slowly fall apart - for years, even decades.

In other cases, people become old and senile and end up in a nursing home.  They still own the house - sometimes other houses as well - and let the home sit vacant and fall apart.  There is one down the street from me like that - empty for at least 20 years, with the power cut off.   Once the power is off for more than a few months, mold and mildew set in around these parts.  Twenty years?  It is likely a tear-down, or a least a tear-to-the rafters kind of thing at this point.

It is kind of hard for the rest of us to understand this - after all, we struggle and scrimp to make mortgage payments on just one house, and here are people with multiple houses, not even living in them, or even renting them out - but rather letting them go to waste, while spending thousands a year to keep them.   And often these folks are not as rich as you might think - they are often middle-class people slowly sliding down the economic ladder, one rung at a time, due to poor decision-making, such as owning a house and then abandoning it.

Hey, at least with a boat or a Jet ski, you could enjoy these things, right?  I mean, still a waste of money, but come on!   Well, sadly, those things often end up abandoned in a side yard or shed, and become someone's "barn find" later on - often worth very little at that point.

Anyway, apparently the house in question was rented out and there was an electrical fire, perhaps from the Federal-Pacific electric box.  The owner got discouraged and let it sit empty.  They died and the kids took it over and let it sit empty some more.  Finally, someone died and someone else had the common-sense to sell it for what they could get for it.  That's the other problem with these abandoned houses - even if they are little more than a shell, the owners or heirs think they are worth a fortune.  "All the neighbors keep asking me if I want to sell [this eyesore] so it must be worth a lot!   A house 'just like it' down the street sold for $500,000, so I'm not going to give it away!"

Of course, the house down the street had new kitchens and baths, a swimming pool, two-car garage and didn't smell like a mildew factory when you opened the door or have weird mold stains on the wall.   Other than that, they are comparable.

Anyway, we met the new owners, who coincidentally (or not) were the same folks who remodeled our house.  When I mentioned this to him, he got nervous, no doubt expecting a litany of punch-list complaints about leaky roofs or poorly done tile work, or that beer-can he left sheetrocked behind a wall.   But I was upbeat - after all, we've lived here for 15 years, and after a time, you can't blame your problems on the previous owner - unless of course, you like to externalize like so many Americans love to do (The virus?  All China's Fault!).

The garage was full of boxes and furniture, which he had pulled from the attic.  He told us to take whatever we wanted, and we came home with some booty - some nice folding chairs which we refinished and re-upholstered, some picture frames we cut down and used on some paintings we had, and a few other things.  From the boxes of papers, I realized the fellow who lived there was a commercial artist from Cleveland, who did artwork for corporate annual reports.   Apparently he did the logos for the very first UNO Pizza - the invoices and letters dunning them for his $600 fee were in the files.

We also found a half-finished painting of a waterfront scene with fishing boat (at sunset) and a portable "Plein Air" painting easel with a pallet that had paints on it that matched this fishing boat picture.  I can only imagine that maybe he had a heart attack and died while painting this last painting - it was unsigned, unlike his other works.

What struck me as sad was that his life's work was all in these boxes, and other than a few things we took, most went into the dumpster.  Presumably, a few of his paintings and artworks ended up with his children or grandchildren - we'll never know.  But only a decade or two later, all this stuff that seemed so important at one time - tax returns and bills for $600 - was just so much garbage to be thrown away.

And once you've cleaned out a few relative's houses, you'll know what I mean.  Mark's Dad saved tax returns from 1970, and we put them all in a big pile and lit it on fire - lest someone purloin a social security number for the discarded papers.   It was all irrelevant junk, and no one was going to go through these archives to reconstruct his father's life later on, like they do at the Presidential library, where a discarded receipt from a hot dog stand is used to place a famous person at a particular time and place.

Again, you can view this as "sad" or "depressing" but that is all in your mind.  Reality is what it is, and how you view it is whether it is "depressing" or not.   Multiply this fellow's story by 300+ million people just in this country alone, and you realize how insignificant we all really are.

Oh, sure, we maintain memories of the famous and infamous - celebrities, some politicians, great inventors, businessmen, and so on and so forth.  Oftentimes, years later, we realize their celebrity isn't what we thought it was.  The great inventor was a nutjob who stole ideas from employees and claimed them as his own.  The great businessman was an old crank and antisemitic.   The celebrity had a drug and alcohol problem and only became famous because of who he slept with.  And politicians?   The seem to have a half-life of 20 years these days - after 20 years, half their reputation is in ruins.

After 500 years?  Well, we no longer celebrate Columbus day, do we?

So, maybe, all things considered, it isn't such a bad thing to be forgotten. Maybe no one will remember us in 100 years, but then again, no one will be writing tell-all exposes of our life.

I hope the fellow (George S. Williams, by the way) had a happy life and enjoyed his art - and at the same time made a living from it.  I hope he loved his wife and kids and they loved him.

And maybe we'll hang this half-finished picture on the wall (along with a watercolor we found, signed) and think of him from time to time and wonder what he was like.
Newer Post Older Post Home