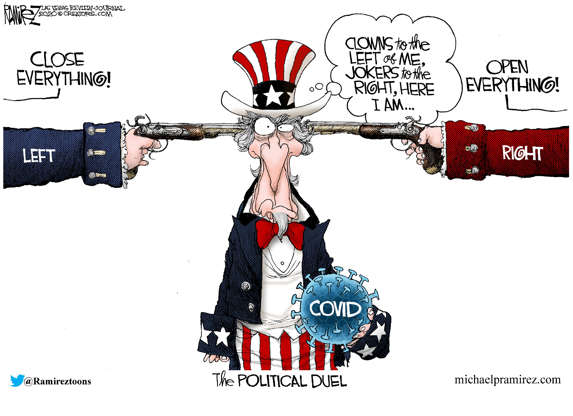 Attempts to politicize this virus - by both parties - disgust me.


The media is at it again - painting the Corona Virus crisis in hues of Red and Blue.  Democrats, we are told, want to lock everyone up and take away their liberties.  Republicans, we are told, want everyone to get the virus by going to the beach and spitting on one another.   It is just ridiculous nonsense - not even a story.

In case you haven't noticed, revolts against unnecessary lockdown restrictions are not limited to the United States  - they are occurring worldwide.  People are rightfully questioning whether some of these restrictions make sense.   And many of them do not.

Politcized?  You bet.  In "Red States" they've closed the abortion clinics, but kept open the gun stores.  In "Blue States" they've closed the gun shops, but your marijuana dispensary is still open.  In other States, restrictions seem random and arbitrary.   In Pennsylvania, the liquor stores are closed.  In Michigan, you can't go fishing (even on a boat, far offshore, away from everyone else).  In Vermont, you can buy baby diapers, but not baby clothes.

THIS is what people are protesting against - worldwide.   Restrictions that make sense and save lives, no one is against.   Isolate the old folks homes?  You betcha - they are the most vulnerable population.   Enforce social distancing and require masks and maybe gloves in stores?   Perhaps - at least that makes sense.    Close one store but leave another one open?  Just arbitrary.

But beyond commercial endeavors, people need socialization and this was driven home to me by this epidemic.  We drive our golf cart by someone's house or ride our bikes there and they come out to chat - keeping six feet away, of course - but they want to chat for an hour or more, about anything at all.  They are just starved for affection.   Human nature being what it is, they stand closer and closer to you as they talk, and I keep having to remind people "six feet!" although that makes me feel like a killjoy.

People need to socialize.  They need personal contact.  They need hugs.  It isn't some weird theory of mine, psychiatrists have documented this for ages.  One of the worst forms of torture devised is simply to lock someone away in solitary confinement.  The lack of human communication will literally drive people insane.

I said it weeks ago - that eventually this lockdown would have to end, not because the virus would be vanquished, but because people would lose their minds.   The media posits that this is some political issue - economics versus human lives.  But people going to the park or the beach has little or nothing to do with economics - and yet they are flocking there in droves, once restrictions were lifted, even in virus-weary New York City.

The damn-and-shame contingent (who likely needs a good hug more than most) is at it on Facebook, calling out people as being "irresponsible" for "spreading the virus".   Hey, if you want to remain locked up for another month or so, be my guest.  No one is stopping you.   In fact, please stay in, forever.   You'd be doing society a favor.  I suspect that folks like that are the ones who muck up just about everything - you know the type, disrupting the service at a restaurant with their petty complaints and constant whining for special service - the kind that want their service peacock and special meal on the airplane. Yes, let's leave them all in perpetual lockup. They can live on Facebook.

But the rest of humanity - worldwide - is chafing at these restrictions.   It may sound dumb, but life without social contact isn't life - and no, some online "Zoom" video conference isn't the same thing - not even close.

We've been fortunate in that there are only a handful of cases in our county and few deaths.   I recently heard about and older couple in their 80's who caught it, here on the island.  They are staying at home and apparently have recovered from it, which isn't all that unusual.  Yes, even if you are old and infirm, it is more likely than not that you will survive this virus.  In fact the death rate for the very old is about 15%.   If you're an optimist, the survival rate is 85%.   Them's good odds.

For the rest of us?  For many, the death rate is in fractional percentages.   Them's damn good odds.

Yes, a lot of people are dying.   There are a lot of people in the world.   Billions, in fact, which is essentially the problem.  When any species dominates an ecosystem, something else comes along and takes it out - a bigger predator, environmental change, loss of habitat, or some virus, parasite, bacteria, or other illness.    We've been overdue for Natural Selection.

So it sounds horrific that tens of thousands have died in the US, until you realize that there are about 330 MILLION people in the USA.    This isn't being "callous" just realistic.

What it gets down to is not whether lockdown restrictions should be ended, but when.   And reasonable people can disagree on this.   Obviously, a perpetual lock-down would be the safest approach - no one would get any virus, ever - well, not many, anyway.   Maybe another month - or two, or three?  Perhaps, but people will start to lose their minds by then.   It is not just a matter of economics or reopening businesses.

Because, quite frankly, you can reopen businesses all you want to, I suspect a lot of people will still be too nervous to patronize them.    I mean, we cut our own hair anyway, but even if we didn't, I wouldn't be rushing out to the barber shop if it was crowded with people.

People who argue that chafing against lock-down restrictions is somehow a "Democrat versus Republican" issue, have their head up their ass (and not surprisingly, the New York Times is a big proponent of that argument).  Those who try to make this out as something happening only in the United States are being willfully ignorant.   Those who argue that the motivation to ease restrictions is purely economic, as just being disingenuous.

Why does it matter?  Because lying is never a way to make your point.  And if we politicize this virus, well, everyone loses.  And odds are, if the Democrats are going to stake out their political high ground on making arbitrary lock-down restrictions, well, they might very well lose big in November.

The Democrats are once again put in the difficult position of hoping for a recession, and worse yet, hoping a lot of people die.