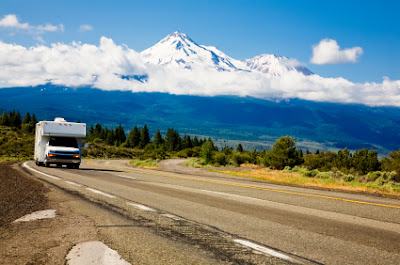 RV sales started tapering off last year. This year will be a bloodbath.

UPDATE:  Read this article (in .pdf format) by a journalist who covered the RV business.  He became disillusioned after he actually bought an RV and realized how poorly they are put together and how the financing can bankrupt many owners.   He gives the industry 20 years, tops, before a massive reshuffling occurs.  Maybe a bit dramatic, but who knows?

I mentioned before my posting about the RV industry's Dirty Little Secret - Quality.  For some reason, that posting has seen a lot of hits lately - like in the thousands.   It has been linked by someone on Facebook, apparently, on a RV discussion site.  As you might imagine, the usual shills have chimed in with "Well, if you bought a quality coach this wouldn't happen!"  But it does with so-called "quality" coaches, which is why a couple got drunk and drove their RV through the service bay of an RV manufacturer, totaling their own RV and one in for service.   A classic case of RV regret - spending hundreds of thousands of dollars on a depreciating asset and realizing too late that they blew their retirement fund and are now "upside-down" on the loan - for the next 15 years.

In 2018 it seemed a lot of people were buying RVs.  The RV industry recovered from the recession of 2008 with a vengeance.  Since many Americans had medium-to-large sized SUVs, they could buy an inexpensive towable and get into RVing.  Ordinarily, this would be an excellent opportunity for the RV industry to introduce a whole new generation of potential customers to the joys of rving. Unfortunately, the boom-and-bust nature of the business may have turned off a lot of these customers for good.

It is often said that as goes Elkhart so goes the nation. When money gets tight, people stop spending money on things like RVs, jet skis, boats, motorcycles, and other consumer products that are really unnecessary to the day-to-day living in North America.  Last year, we started to see the sales of RVs taper off, sure sign of recession was in the works.

But now, here we are in 2020, not only is our recession blossoming, this Corona Virus thing is made things 1000% worse.  People are finding themselves out of the job and with no paycheck and trying to sell off their assets.  Even Elon Musk is trying to unload his multimillion-dollar mansions in Los Angeles, apparently of which he owns several.

I was sorry to hear that about Mr. Musk, but then again, if you scratch the surface I think he's a piece of white trash masquerading as a tech titan.  Buying multiple million-dollar Mansions is something lottery winners, sports heroes, and nouveau-riche movie stars and celebrities do.  And usually they end up bankrupt in the end.

These are stupid Investments because when you buy them during a hot market they cost a lot of money.  And then when you need the cash, during a recession, no one is buying and you end up losing your shirt.  I suspect Mr. Musk they lose money on one or more of his mansions.

The same is true in a smaller scale for RVs.  Take Mr. & Mrs. Homeowner, who bought a tow-behind trailer to pull with their Chevrolet Tahoe.  They bought it in 2008 at the height of the market and paid $30,000 for it. That's a fairly inexpensive RV, all things considered, but large enough for them and their two kids to go camping.

And like most newbies to the RV business, they probably made a number of mistakes early on and hopefully recovered from them without any major problems. The big one of course is loading the trailer improperly, which can cause a sway situation which can literally upset the entire thing going down the road.

But like most people, they ended up using the RV less than they thought they would.  Since they're still working they only get a few weeks off a year for vacation.  Taking the RV out for a weekend jaunt seems like more hassle than it's worth, particularly when there's something good on TV.  So now, Mr.Homeowner gets laid off from his job and they need a little money to make the mortgage payment. No problem, right? They'll just sell the RV.  The problem is, everybody else has the same idea and a number of RVs, boats, motorcycles, jet skis, and other consumer goods are now flooding the market on eBay, AutoTrader, RV Trader, BoatTrader, Craigslist, and every other site.

Not only that, they are chagrin to realize that the book value on their RV is at least $1,000 less than what they owe on the loan.  Even if they can sell their RV, it's not going to help the make the mortgage payment this month.  In fact, it's going to put them further behind.

But since they're struggling to make the mortgage payment and the RV payment, they don't have any extra money laying around to fuel up the Tahoe and go on a camping trip this weekend, even if gas is down to a dollar a gallon.  So yet another RV is relegated to the side yard, to slowly rot to pieces until the loan is paid off.  I suppose you could always use it for target practice.

The same holds true for RVs in any price range.  If they are financed on long notes, they are worth less than the loan balance, for most of the life of the loan.  For mega-expensive RVs, this can mean huge negative numbers - $100,000 or more.   And no, they often aren't "more reliable" than more plebeian rigs, because they are often so ungodly complicated.

This doesn't mean I am against RVing.  No, we are charter life members of The Good Sam Club, which has morphed from a club of RVer's to a mega-corporation that owns the largest chain of RV dealers, repair centers, magazines, RV park guides, and so on and so forth.   They are now the General Motors of RVing, back when GM had a 60% market share.

And sadly, they are selling a lot of these "entry level" RVs ("Freedom Elite!") on very long loan terms.  In the short-term, this makes a lot of money and sells a lot of rigs.  In the long term, it could turn off a whole generation from RVing.

With RVing, it is like any other hobby - often it is up-or-out.   If you buy a small motorcycle or boat, you get the itch for a larger one within a few years.   Pretty soon you have the ultimate hog or the ultimate boat - or you decide that you've had enough of the hobby and move on.  I got out of motorcycling, because of the "been there, done that" phenomenon, and I realized that dropping twenty grand on a Harley wasn't going to make it better.  Ditto for boats - we got out at the 28-foot stage, rather than "moving up" to a 38-footer.  The costs would have been staggering, and the enjoyment actually less.

With RVing, we realized that what we liked to do was visit small out-of-the way places, like the Blue Ridge Parkway, or Provincial Parks in Canada.   We weren't interested in spending $100 or more per day to stay in a "Motor Coach Resort" and certainly not interested in spending a month in such places.   We also didn't want a rig that we would be too nervous to take places - like a mountaintop in West Virginia, or on a ferry to Newfoundland, where you pay by the foot.

We also realized that a lot of smaller "starter" RVs were poorly made - after owning three, we saw firsthand how delamination and rubber roofs work out going down the road.  And no, there isn't much you can do to prevent this.  In RV sites, the shills play the game of blame the consumer - "if only you had used rubber roof sealant!" they cry.  That is akin to blaming a cancer victim for getting cancer.  RVs should just be made better, period. 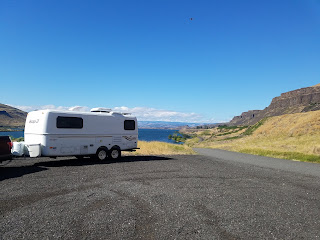 We don't have to worry about where to park or whether we can turn around - so much.

But that's why we bought our first fiberglass RV - and kept it for 15 years.  Paid cash for it - no "upside down on the loan" nonsense.   We sold it for nearly what we paid for it, and the new owner took it on a 10,000 mile trip the first year.   We upgraded to a 21 foot fiberglass RV.   Yes, they cost double what a "stick built" trailer would cost, but the one-piece fiberglass shell lasts a lifetime and then some.

The RV business is weird - and fascinating.  So much of it is caught up in status and style.    People buy these monster rigs or fussy delicate Airstreams just to show off.  "Look at me!  I  have an outdoor television!" - but so does everyone else in the Motorcoach resort.   Look at me, I drove 50 miles down a gravel road to camp beside a pristine lake in the Yukon Territory.   You can't do that in some fussy expensive rig - nor would you want to.   A lot of people get so caught up in besting other people in the trailer park, they forget what camping is all about - the ability to explore the world, and not just see exit ramps and truck stops.

I think you'll see a lot of RVs - along with other toys - hitting the market soon.  But don't be in any hurry to buy.  It takes a while for people to give up and give in and let go of possessions.   The last recession struck in 2008, but it was 2011 before I got serious about selling off  my collection of hobby cars, boats, and whatnot.    The real estate meltdown of 1989 crashed the price of houses.   I was still buying foreclosure and distress-sale properties as late as 1998.

In fact, in the near-term, there won't be too many bargains.  The folks "upside-down" on their loans will ask for more than the loan balance - after seeing a rig just like theirs for sale at the dealer for more money.   What they fail to realize is that dealer prices are not private party sale prices, and dealers have financing to offer - and of course, asking prices are not sales prices.

It may take until 2021 or 2023 before people give up and let go.   And many will let go by letting the RePo man take the keys and drive it away.   But its going to get ugly - for people upside-down on these RV loans, and for a lot of smaller RV dealers as well - not to mention some of the manufacturers.   We lost a slew of RV manufacturers the last time around.   I think even more will go belly up this time.
UPDATE:  Shortly after I wrote this, the RV market went berserk - everyone started buying campers.  They cal them "Corona Campers" - newbies who are buying RVs and boats because the cruise lines and these parks and airlines are basically cut off. This will not end well.   Expect to see a lot of campers for sale next year, as people sell them or they are repossessed.
Newer Post Older Post Home