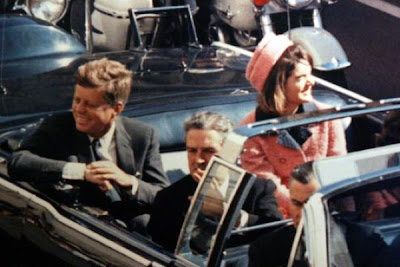 I have written before about conspiracy theories, several times, and how they are form of, or at least a symptom of, mental illness. Specifically, they are a form or symptom of depression.  People who believe in conspiracy theories are usually very depressed people.  And sadly, they often ignore the actual shit that's going down in their lives, in favor of "solving" some national conspiracy.

I've also written before that I believe that mental hygiene is like personal hygiene in that you have to work at it. If you allow your mind to go off the rails, you end up a very unhappy, unproductive person with no friends, no spouse, and thus the thing feeds upon itself. Pretty soon you find yourself alone and unhappy.

In the movie A Beautiful Mind which profiled the life of John Nash, the famous mathematician, it was interesting how he devolved and descended into the depths of mental illness, finding conspiracies and "patterns" in everyday things. This is not to be unexpected. If you understand how the human mind works, you can understand how it's possible that people fall into this death spiral.

The human mind is a neural network, as I noted before. Neural networks are excellent pattern recognition machines. We look for patterns in everyday life because finding and recognizing these patterns is essential to our well-being and existence.

For example, the human mind is very preoccupied with facial recognition. Our brains are programmed to recognize familiar faces, and this is probably a survival instinct.   During caveman days, we greeted those who look familiar - who are in our tribe - while we attacked those who do not, before they attacked us.  Cavemen who didn't have good facial recognition abilities didn't live long.

When this program feature of our brain goes berserk, we tend to find faces in inanimate objects. Thus, for example, people claim to see the image of Jesus or Mary in a taco or french toast or a toasted cheese sandwich.  We find a "face" on Mars, for example, not because there is a lost alien civilization, but because our brains are programmed to find faces. That's why those "Where's Waldo?" books were so popular.

Think about it.  No one ever discovers an image of Jesus' feet in a mold stain on the church wall.  No one finds images of someone's butt on a cheese sandwich or a mountain on Mars.   Our brains are programmed to find faces - it is what they do.  We are nothing more than facial recognition computers - pattern recognition machines.

Thus, when we see a geographical feature on a map or on a mountainside, such as in New Hampshire, we think it looks like a face (until his "face" falls off, that is). This is just part of how our brains work. And in the movie A Beautiful Mind, Mr. Nash., who had a very powerful mind, tended to see patterns in everything. When trying to decrypt coded messages, this feature of his brain was very powerful and useful.  But when he put his brain into neutral, the pattern recognition engine just over-revved, and he started seeing patterns and everyday life that simply didn't exist.

I think the same thing happens with these conspiracy theories. People put together these collections of unrelated facts and claim that there's an underlying pattern and ominous conspiracy behind all of it. But as in the movie, they're just unrelated items and there is no underlying conspiracy. A set of coincidences does not a conspiracy make.   Correlation is not causation.

And of course there's an army of people willing to make money off these conspiracy theories by fabricating evidence from whole cloth and writing books and today making videos, putting them online to generate adclick revenue. And there is no shortage of people willing to click on these things, or buy the books, and join the discussion groups and give their life over to these conspiracy theorists.

But as I noted before, it's a dead-end street. Some might say it's a harmless hobby, but it's a hobby that leaves one feeling desolate and depressed.  There are no happy conspiracy theories.  No one has a theory that people are secretly conspiring to make the world a better place.  All the conspiracy theories since the dawn of time basically postulate that humanity is evil and banal and that our governments are corrupt and that secret cabals are trying to run everything.  Gee, that sounds cheerful!

If you believe this sort of thing, then you become depressed, as everything seems hopeless and there's no point in even trying to do anything anymore. And indeed, this is one reason why people latch on to conspiracy theories.  Perhaps their own life hasn't been as successful as they thought it would be, or didn't turn out the way they thought it should.  So it's all-too-easy to blame everything on a conspiracy theory.  Why bother even trying when the whole system is rigged against you, right?

And back when I smoked a lot of pot, that sort of talk was usually bantered about as we passed the bong.  Most of my drug friends fell into that sort of depression.  If there is a conspiracy theory of any merit, is that conspiracy theories themselves keep people depressed and unhappy, and thus unempowered and of course, excellent consumers.   Why bother trying, when there is a conspiracy against you?   Might as well lease that new car!

Of course, once I stopped smoking pot, I realized I could succeed quite well in this world on my own merits.  I went back to school and got a degree and then got another degree got a good job and started my own business and made a little money and became comfortable.  I certainly didn't become mega-rich or super wealthy but I have enough money to live on the rest of my life, I hope. I don't have to sponge off others or worry about debt collectors at the door.

Sadly, a lot of people compare their lives to that of billionaires or celebrities or movie stars and wonder why their own lives come up lacking.  And the reason for this is quite simple, in any society there's always going to be one person on the top and many more people on the bottom.  If you can crawl your way up to the middle you're doing pretty damn well and should be quite happy with that.

In fact, if you're living a middle-class lifestyle in America, you're doing better than 99% of the world. It really pays to travel some and see how other people live in other parts of the world. At least for me, it made me realize how obscene it was to complain about my life in any regard when other people had it so much more difficult than I did.  Unfortunately, most Americans don't travel much and thus don't understand why the rest of the world hates us.  They don't hate us because of our democracy or freedom, they hate us because we whine all the time about how rotten a deal we got while being the richest people on the planet.

Of course, the conspiracy theorist will have none of this.  I run into a lot of people who claimed the Federal Reserve somehow took away all their money.  Of course, these people never really applied themselves in life and never earned any serious money, so how could the Federal Reserve have taken it away?  No one can "take away" from you that which you never had to begin with. But that's common-sense thinking, which is immediately dismissed by conspiracy theorists.

There are people, it seems, who believe that the world owes them a living.  That just because some internet geek or some Hollywood star has millions of dollars, that means they should have millions of dollars, too.  But it doesn't work that way. Some people work hard to get where they are, others just get very lucky.  For many people it's a combination of both.

One thing's for sure, you're never going to get anywhere wasting all your emotional energy – which is the most valuable resource you have – on conspiracy theories. They will just make you feel listless and depressed, and also foster learned helplessness.

The happy ending of the movie A Beautiful Mind was that Mr. Nash, through extreme effort as well as the care of Physicians, managed to pull himself back from the brink of mental illness.  This is quite an amazing feat, as most mentally ill people don't come back from the brink.  In fact, most of them live very short and unhappy lives.

But apparently some part of his mind pulled back and realized that what he was doing was basically over-revving his mental engine.  And he realized that his belief in these conspiracy theories was driving away all his friends, employers, and even his spouse.

And that's the problem with the conspiracy theorist.  As they lose more and more friends and lose jobs and people drift away from them, they become more and more insane.  Eventually, nobody wants to deal with them, and they view this as a further evidence of the conspiracy.  The entire world becomes a merry-go-round with them in the center and everything revolving around them. It is a bit of narcissism as well.

This means saying goodbye to the conspiracy theory website and the discussion group and Facebook pages.  In fact, avoiding "social media" is a good way to improve your mental health, entirely.  I found that Facebook made me depressed, and discussion groups - and God forbid, the "comments" section on YouTube - are sure-fire one-way tickets to depressionville.   No matter what you post or say, some Troll will jump down your throat for no reason at all, other than they are depressed, and misery loves company.   It is, also, why I have a troll policy.  Sorry trolls!   So, no, I am not interested in hearing from "conspiracy buffs" as to why I am wrong about everything.

Fear not, Bigfoot will never be captured, and the Loch Ness monster will never be found.  I can say this with certainty because they simply don't exist.  A few blurry photos and some supposed eyewitness testimony from sketchy individuals does not make a truth.

Your time here on this planet is very short and will slip through your fingers before you know it. Don't waste it on depression and loneliness.   Don't waste it on conspiracy theories.
Newer Post Older Post Home