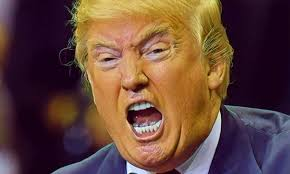 In the past, many on the right accused the left of "Mindless Trump Hate."  Well, thanks to Trump's manic efforts to usurp the election, the left can point to a specific, rational thing to hate Trump for.

It is clear to me than ten years from now, Donald Trump's Wikipedia entry will center upon his attempt to overthrow our election system by pressuring State legislators, Governors, Secretaries of State, and both State and Federal Courts, to arbitrarily overturn election results based entirely on Qanon conspiracy theories.   This is his swan song, and it will overshadow his failed casinos, online college, steaks, ties, airline, and even his reality television show (the only arena where he saw success).   He will be known for being the world's worst sore loser.

I know a lot of rabid Democrats who sputter with Trump hate.  When you ask them for particulars as to what policies of his they dislike, they get very vague.  They spend a lot of time watching Rachael Maddow - Hannity in drag - and get caught up in this cheerleading that has replaced rational thought in this country.

I understand why some people supported Trump - mainline Republicans who wanted their issues addressed.  And he did address those issues, although perhaps went too far for even some Republicans. He reduced regulations to the point where even industry was saying to slow down.  He cut taxes but increased spending - which drove the dwindling number of "fiscally responsible" Republicans crazy (the debt clock is being wound up as we speak - look for it to star in 2021!).   He appointed conservative judges who will rein in some of the craziness in our legal system and curtail abortion.   I "get" that if you are conservative, these are your issues.

But in a classic "hold your nose and vote" a lot of conservatives and evangelicals voted for Trump in spite of his best efforts.  They knew they would "win" on their issues - they were not enamored of the man.   The MAGA-hat wearers, on the other hand, root for candidates like they are professional wrestling stars, and they loved Trump - it was a cult of personality.  And Trump loved them, and assumed that the other Republicans loved him, and didn't just see him as a means to an end - a means of getting poor people to vote for tax cuts for the rich.

And on the Left, there are many who can point to policy decisions they disagree with - which is what is really important, not a dumb tweet.   His cruel immigration policies go beyond merely trying to curtail the worldwide "migration" of people from poor to wealthy countries.   His tax cuts have left the treasury dry while ballooning the deficit.  His attempts to destroy Obamacare (and not come up with any sort of replacement) concern millions of people.  The list goes on and on.   But those are real policy decisions, not the window dressing.

When you ask the rabid Trump-hater about that, they can't articulate any policy points, but will point to his tweets, poor posture, poor taste, poor health habits, orange skin, and his inarticulate speech patterns (everything is "beautiful" or "terrible" - he has the vocabulary of a children's picture book), and of course the rabid Tweets that are laced with lies and untruths.  Perhaps on a personal level, this is a reason not to like him.  But we don't have to sleep with him - and neither does Melania, apparently, anymore.

But this latest thing - the election meltdown - that is a one single thing that anyone can point to, that indicts the entire Trump presidency. The tweeting and his poor taste are just superficial things.  Disagreement about policy decisions or political views are something entirely normal.   Most of the demonetization of Trump in the past was just that - the usual nonsense that the opposing party has leveled against a President since, well, since George Washington left office.   It is just noise, not signal, it is just window dressing, designed to rile up the "base" (in every sense of the word) of each party.  It is the "Lock her up!" chanted at Hillary, the birther arguments leveled at Obama, the endless chant of "Whitewater" aimed at Bill Clinton, or "Ketchup is a vegetable" used against Reagan.  It is political cheer-leading, and little else.  And both sides do this, because saying, "I disagree with your policy points" just doesn't have the same impact.

But now this - This!   You can't ignore it, or write it off as partisan mud-slinging when the President of the United States wipes his ass with the Constitution and tries to usurp an election through political or even military means.  When a President asks a Governor to declare a "State of Emergency" (what emergency?) to overturn an election, that is crossing a line beyond mere policy points or political window-dressing.  This is far more important that whether he dyes his skin orange or has appointed anti-abortion judges.  We can live with policy differences.  We can live with buffoonish behavior.  We can't live with a President who tries to overthrow the government and have himself anointed dictator-for-life.

Because if you think about it, that is where this is going.  If Trump could somehow succeed in getting himself  "re-elected" by persuading Judges, Justices, Governors, or State Legislators (or some motley concoction of them) to overturn election results in several States, or worse yet, declare a national "state of emergency" and have himself "re-elected" to office, then there is nothing really stopping him from being President-for-Life like Hugo Chavez or Fidel Castro - oddly enough the very people he disparages (apparently out of jealousy).

So far, it seems the Constitution, crumpled, wrinkled, and smeared with Presidential feces, has survived intact.  The very mechanisms provided in the document, along with State and Federal laws, have worked - so far.   But of course, this has all depended on a number of people - many of them Republicans - rising to the occasion and obeying the law, and not obeying their Presidential overlord.  It could have gone another way - and it still could.   There are a few people in State Legislatures who are saying, "why not?   Why not just declare the election for Trump?"   And there are a few judges who are either evil-minded or muddle-headed enough to listen to Qanon theories that are supported by "scant evidence" (actually no evidence) that might go along with this.  The media is declaring this a victory for the Constitutional process, but it ain't over yet - and it won't be over even after January 20th.

Assuming that Trump fails to stage a military coup and force a new slate of electors on December 14th, or just declare martial law, the country will still not be the same in 2021.   Right now, some "Freedom-Loving" militiaman is renting a Ryder truck and stuffing it full of diesel fuel and ammonium nitrate.  I predict this will happen. The rhetoric that Trump is bandying about is far more pervasive than the rhetoric of far-right religious groups after the Branch Davidians standoff.   All it takes is one nutjob, and so far, the FBI has done a good job of disarming these windup soldiers.

This is Trump's legacy, and I think it is scaring the crap out of mainstream Republicans. Policy decisions and political views are one thing - and the one thing they voted for.  Trump assumed they were voting for him because they loved him, and as we all know now, apparently he didn't get enough love as a child or something.

So in a way, we have to thank Trump for his post-election meltdown.  Because it confirms for many people that we did make the right choice.  It coalesces into one single thing, all the little and big things that were disturbing about Trump.  It illustrates quite clearly that this man has lost his mind and should never have been President.  It also makes us really appreciate Mitt Romney and John McCain, in retrospect.

And I think that This will also motivate the GOP to clean up its act and eschew radical-right politics and perhaps start grooming a candidate - a normal candidate - for President in 2024.

POST SCRIPT:  For those who voted for Trump based on "issues" recall that at one time, Donald Trump was a Democrat and a pal of Hillary Clinton.  He was, at one time, pro-choice as well.   I am not so sure that his commitment to core Republican issues isn't more than window-dressing used to get himself elected.  And as many in the GOP have noted, his populist stances have gone against some of the interests of the big-money donors to the party - which may be why the big money went to Biden this time around.