The Rise and Fall of "Dr." Jordan Peterson 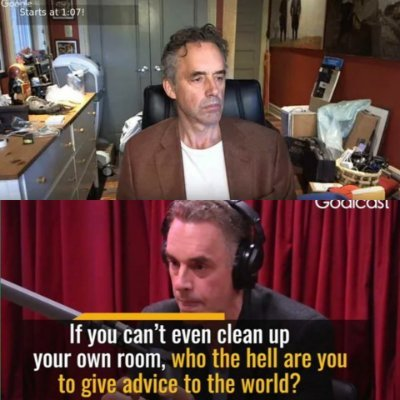 What the hell happened to this guy?

A few years ago, a reader sent me a link to some videos done by "Dr." Jordan Peterson, a college professor from Toronto, Canada. You know, one of those "ivory tower" guys the far-right likes to lambaste.  But for some reason, while the opinions of college poindexters are roundly condemned by the right, they loved this guy. And he could call himself "Doctor" all day long, as far as they were concerned - because he's a guy, right?  Just kidding around here.  But it is funny how it is when the shoe is on the other foot.
At first, I was entranced by his presentations.  As I said at the time, he kind of felt like a Leo Buscaglia who kicked you in the teeth.  He was going on about the rise of the Man-child - the 20- to 30-something men who live in their parents' basements and play video games all day and smoke pot and work at slacker jobs.  As he pointed out, in previous generations, such men would be engaged in serious work with careers, and married and having children. What the fuck happened to our generation?  (Well, pot happened, but that answer isn't popular).
It's a theme I've harped on before, and at first I thought "Dr." Jordan Peterson was a kindred spirit. But then I started to watch more of his videos and I realized that maybe something was a little bit off about this guy.  And it turns out, he's a darling of the far-right, particularly the folks at "Toilet Paper USA" a college Republicans group of snarky young men who equate snarkiness with intelligence. They think that trolling is a sign of being clever and smart and that "owning the libs" actually accomplishes or proves something, when all it proves is that the person trying to do it is a fucking idiot.
I mean, not that I feel strongly about any of this.
I digress here, but in the bygone days of "newspapers" we had something called "editors" who were gatekeepers of what was, and wasn't, socially acceptable.  Left- or Right-wing, newspapers had standards, and today's snarky "journalists" who run everything down and then pat themselves on the back for being "clever" would never had made it past those gatekeepers of the past.  And maybe that was a good thing.  Because when we present oddball opinions alongside of common sense, and "let the reader decide" it makes it seem that both ideas have equal value.  And yes, there is a way to get a point across without being insulting and degrading.  But I digress.
Anyway, I was wondering what happened to "Dr." Jordan Peterson, who apparently is a Doctor although Jill Biden is not. I saw an image of his on the internet that showed him blathering on into the blogosphere while the background showed his house being a total mess of dirty laundry and dishes and crap. And I thought to myself, what the fuck happened to this dude?  And it turns out a lot of happened to him.
Apparently, he suffers from anxiety disorders and depression, which can be debilitating. I don't envy him in that regard and I give him my complete and utter sympathy. Anxiety disorders are nothing to laugh about, and I know a lot of people who had them and it basically destroyed their lives. A good friend of mine suffered from severe anxiety disorders and died in his 50s.  It was a pretty sad ending.  Mentally ill people often don't live very long.
But "Dr." Peterson seems to have some emotional issues as well. And apparently he felt that the Canadian medical system - the fabled Socialist medical system that our Canadian friends laud - wasn't sufficient to meet his needs. So he decided to travel to Russia of all places to have treatments to deal with his anxiety as well as addiction to anxiety-attenuating drugs.  What the fuck?  Russia?

In 2016, Peterson had a severe autoimmune reaction to food and was prescribed clonazepam.[140] In late 2016, he went on a strict diet consisting only of meat and some vegetables, in an attempt to control his severe depression and the effects of an autoimmune disorder including psoriasis and uveitis.[5][72] In mid-2018, he stopped eating vegetables, and continued eating only beef (carnivore diet).[141]
In April 2019, his prescribed dosage of clonazepam was increased to deal with the anxiety he was experiencing as a result of his wife's cancer diagnosis.[142][143][144] Starting several months later, he made various attempts to lessen his intake, or stop taking the drug altogether, but experienced "horrific" benzodiazepine withdrawal syndrome, including akathisia,[145] described by his daughter as "incredible, endless, irresistible restlessness, bordering on panic".[146][142] According to his daughter, Peterson and his family were unable to find doctors in North America who were willing to accommodate their treatment desires, so in January 2020, Peterson, his daughter and her husband flew to Moscow, Russia for treatment.[147] Doctors there diagnosed Peterson with pneumonia in both lungs upon arrival, and he was put into a medically induced coma for eight days. Peterson spent four weeks in the intensive care unit, during which time he allegedly exhibited a temporary loss of motor skills.[142]
Several months after his treatment in Russia, Peterson and his family moved to Belgrade, Serbia for further treatment.[140] In June 2020, Peterson made his first public appearance in over a year, when he appeared on his daughter's podcast, recorded in Belgrade.[140] He said that he was "back to my regular self", other than feeling fatigue, and was cautiously optimistic about his prospects.[140] He also said that he wanted to warn people about the dangers of long-term use of benzodiazepines (the class of drugs that includes clonazepam).[140] In August 2020, his daughter announced that her father had contracted COVID-19 during his hospital stay in Serbia.[148] Two months later, Peterson posted a YouTube video to inform that he had returned home and aims to resume work in the near future.[59]

No offense to the "Doctor" but I think Canadian health care is probably a notch or two above Russian health care.  Maybe Putin wanted to do some more implants into his favorite Manchurian Candidate. Just kidding - but hey, "Doctor" Peterson likes to dish it out, so he can take it, right?  Or will this special snowflake melt?
His fascination with Russia doesn't end there. Apparently, he collects Soviet-era propaganda art which adorns the walls of his home.  I'm not sure what this fascination with Soviet totalitarianism is, it seems to be contradicting his philosophies - or does it dovetail with them? Or maybe he just lost his fucking mind?  Or maybe he always was crazy?  I don't know what the case is.

Starting around 2000, Peterson began collecting Soviet-era paintings.[10] The paintings are displayed in his house as a reminder of the relationship between totalitarian propaganda and art, and as examples of how idealistic visions can become totalitarian oppression and horror.[15][24]

OK, what the fuck is the deal with right-wingers and Russia? I mean, back in the day, being "conservative" meant you had a visceral hatred of everything Russian - especially including communism. Today? Well, some of the biggest right-wingers are embracing Russia, even as it acts in direct opposition to the interests of the United States. Say, you don't think these folks are being influenced by Russian trolls, doya? Nah!
"Dr." Jordan Peterson - the classic "useful idiot" for Putin's Russia!
All I know is, in this latest photograph he looks like some homeless dude who is bumming a cigarette from you or asking for a couple of bucks to buy some beers or something. Seems like his whole life is gone off the fucking rails. And yet, just a few years ago he was trying to tell the world how to act and think and do. It just goes to show you that no one is perfect. 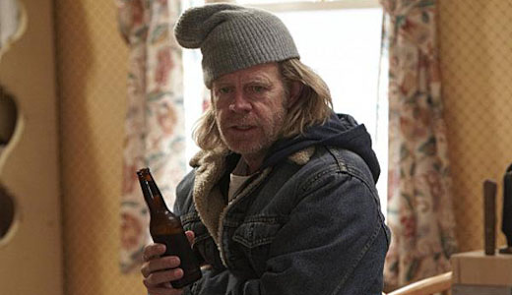 It's a look, I guess....
I noticed that he is no longer the darling of the far-right anymore, either. Apparently his fall from grace was rather sudden and as swift as his rise. That seems to be the case with these right-wingers. From Joseph McCarthy onward, they rise like a rocket and burn brightly and then collapse into darkness. Either they become irrelevant overnight, or they are found in a restroom soliciting sex from an undercover officer, or found having parties with rent boys and cocaine, while claiming to be fundamentalist Christian ministers. Whatever the case, it seems to be a pattern that happens over and over again. Yanni Yapalapalous was not an anomaly.
Again, I feel sorry for "Doctor" Jordan. He built his reputation on being a hard-ass. He was going to hand out harsh advice to the rest of the world, but at the same time, his own world was collapsing. It's easy for some to have some schadenfreude over his fall from grace.  But on the other hand, the part of me that has empathy for others - the part that he eschewed as part of his right-wing philosophy - makes me feel sorry for this fellow.  He is a tragedy, not a comedy or a farce, and certainly not a fright.
But maybe his rise and fall from grace is illustrative of something else. Perhaps, this trend in modern politics toward hatred and violence and evil is something that should be slowed down and examined. The very people who are spewing this sort of hatred as well as draconian measures and lack of empathy for the "less fortunate" are often the ones who have severe personal problems. I'm not saying I'm a bleeding heart liberal who thinks we should hand over all our money to the homeless - far from it.  But on the other hand, I think we've taken this hate thing a little too far.
Hate is like a cancer that burns from within. And it tends to destroy people's lives, over time. I think "Doctor" Jordan's example is not an anomaly, but quite the common result.  His depression and anxiety are just a cumulative effect of being harsh and unforgiving for so long.  It happens to all the trolls, eventually.
The rise and fall of Donald Trump will probably follow a similar arc.
* * *
NOTE: For those who read this and say, "Well, aren't you being snarky as well?"  That's the point.  These folks on the right are very hateful and personally insulting - think Donald Trump name-calling of his opponents.   But when the shoe is on the other foot, they cry like babies - they are the "special snowflakes" they accuse the left of being (projection much?).   But as snarky as I might be, it pales in comparison of the hate that is power-vomited by the right - the attacks on Jill Biden, for example, as being "illiterate" are not only inaccurate (I am still waiting to see specific examples of these "spelling errors" in her thesis) but degrading.
But that's the whole modus operandi of the new right - insult and degrade the opposition, and when they call you back on it, say "how dare you!"  Sorry, but we can see through this obvious ploy.
Newer Post Older Post Home