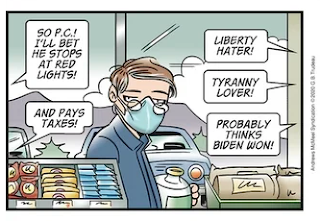 How did we get to this point?

Many years ago (has it been decades?) we had a chance to visit Japan - twice.  After business meetings were over, Mark flew over to meet me and we spent a couple of weeks exploring.   It was fun, but of course, we only scratched the surface of that fascinating country.  One interesting thing back then - the 1990's - was how many people wore face masks in public - in crowded cities and even far out in the country.  The reasons they do this are various, but long story short, in a crowded country, it is far easier to catch a cold or flu, and if you are elderly, this can be debilitating or even deadly.  Not surprisingly, many of the mask-wearers back then were older.  It is just common sense.

I suspect the folks in Japan aren't having as much of an issue with mask-wearing, as it has been a tradition for decades, now.   But why are people in America freaking out about it?  We read in the paper all the time about people being assaulted or even killed over masks.  Someone asks a person to wear a mask, and that person punches them in the face or reaches for a gun.

Around here, we haven't had much of that - yet - but I have already noted the "Karens" and "Kevins" who seem to be making a big deal about this.  I have seen several people walking around with that Sidney Powell smirk on their face.  One lady at the wholesale club was marching around with two maskless kids in the shopping cart, not buying anything, and you could just tell she was hoping someone would say something about her not wearing a mask, so she could whip out her cell phone and make a "mask-martyr video" to put on YouTube and hopefully maybe Trump himself would Tweet about it.  Sadly for her, no one raised to the bait, because you could just tell she was looking to stage a confrontation.

Yea, wearing a mask is a pain.   I do it because I don't want to freak out other people. Some folks are very scared by this pandemic - older and infirm people that I know, who have hardly left home in the last few months, other than to do curbside pickup of their groceries.  It is just cruel to walk around without a mask, when you see the panic in their eyes when they see you.

And yea, it is a pain to remember to bring the mask and wear it, and some of these masks fog your glasses or make you hot and it is hard to breathe in them.  But to intentionally not wear one as some sort of "political statement" to try to make yourself internet famous is just childish and dumb.  And no, you don't have a "right" not to wear a mask in a place of business.  It's their business, they make the rules, and if you don't like it, well, that's your problem, not theirs.   Stop making it theirs.

People are protesting and committing acts of violence over these "lockdown" measures.  Some are claiming economic damage - that retailers and restaurants are going out of business, which they are, because of these restrictions.   The folks protesting, however, are not the owners of these businesses, or even the employees, but the customers.  "I can't get a beer at the bar!" they cry, "So now I have to drink at home!"  Oh, boo-fucking-hoo for you.   And no, knocking down the door of the State Assembly building is not proving anything, other than you are an ass, and all you stand for is bullshit hypocrisy.  Apparently violence and looting is OK, so long as it's done in the name of Trump.

Where we live, about 1/3 of the people in the stores aren't wearing masks, and it seems the stores are not doing much about it. It isn't worth the hassle.  I was at a Winn-Dixie the other day, and some tattoo'ed meth head tried to make a scene because the folks at the pharmacy wouldn't fill his oxycontin 'script (sports injury, doncha know!) without a mask.  He started shouting and carrying on and no one paid any attention to him, which made him madder.  What was really stupid is that there were free masks available at the pharmacy, and he left the store without his prescription, rather than submit to the tyranny of wearing a mask for ten minutes.  Who feels sorry for jerks like that?

Maybe - just maybe - the world would be a better place if folks stopped trying to "make a point" and just tried to get along.