Are We Really on Control of Our Own Destiny? (Cannibal Hamsters) 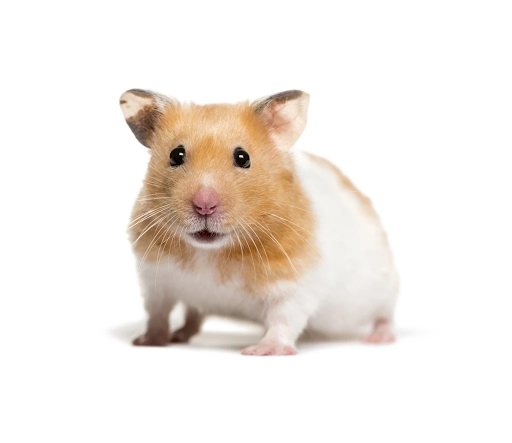 We like to think we are in control of our own actions, but our brains are really just a sack of chemicals and electrical impulses. Cannibal Hamster would be is a good name for a punk band.

I mentioned in in early posting that an experimental drug used to treat Parkinson's disease turned people into uncontrollable gamblers. I'm sure Sheldon Adelson is trying to figure out a way to put this drug in the food they serve at casinos.

Apparently there's a part of your brain that is involved with risk-taking, and this particular drug stimulated that part of the brain, and induced some people to take ever-wilder risks. It raises the interesting question whether we really control our own destiny or not?

I came across this article recently which discussed the phenomenon of cannibal hamsters. Apparently in northern France, fields have been plowed under and wildlife habitats have turned into farmland to grow corn. The hamsters living in the area then eat the corn and then become violent and agitated and cannibalize their own young.

Now you know why your children's cereal has niacin in it. Without the niacin, after consuming a bowl of Corn Puffs, your children would then try to eat you.

It also makes me wonder whether America's largely corn-based diet is to blame for a lot of our social unrest these days. In 1977 America soft drink companies ditched cane sugar in favor of high fructose corn syrup, as the price of cane sugar skyrocketed. It was a political way of us trying to screw Cuba, but the net result was, according to some people, America's obesity epidemic. People claim that high fructose corn syrup isn't digested and processed by the liver as cane sugar is.

Of course, about the same time popcorn and microwave popcorn became a big thing.  We've also seen an increase in the number of corn-based food products including nacho chips and Fritos and various other snack foods made with corn. Of course, these are all cooked -  but are they cooked enough? It makes me wonder if perhaps reason why people are protesting the street is an overdose of corn. Of course, over the same period, we also saw crime drop dramatically until recent months.  So I guess there is no corn-crime connection.

Maybe that explains why people in the South were known for their belligerence and intolerance back in the day – it was all those grits!

Perhaps I could show up at the next proud boys rally and handout vitamin B3 tablets and watch them mellow out as a result. Who knows, it just might work.

But this experiment illustrates that we really aren't in control of a lot of our own destiny. Our brains do things sometimes to thwart us. Even simple things like our level of hydration and our blood sugar level - particularly those simple things - affect how we act and think. If you become dehydrated, your blood pressure can increase as your blood slowly turns into mud. This, in turn, can cause you to become angry and listless and tired in succession. Low blood sugar level can cause you to become irrational, and I've seen this firsthand both in friends neighbors, relatives, spouse, and myself.

Of course, this would be prime fodder for conspiracy theorists. Back in the 1950s the John Birch Society claimed they putting fluoride in the water was a communist plot to somehow affect how we think and act. Young people today claim that the water vapor from jet engine contrails are somehow sterilizing the masses. With regard to the latter, we can only hope that is the case, as the world is bulging with an overpopulation of greedy selfish humans.

It reminds me of the rumors back in the 1950's that schools would put saltpeter in the cafeteria food to suppress the sexual urges of hormonal teenagers.  I don't think it worked.

I don't truck in conspiracy theories. And I doubt the powers-that-be are tainting our food, water, or air to control our mental processes. If they did, be very simple thing to discover and document.  You can't run a major conspiracy without someone blowing the whistle.  Even minor conspiracies are quickly found out.  But perhaps something in the water makes people believe in conspiracy theories.   Must be, because they are quite popular as of late.

This is, however, an interesting phenomenon to realize about one's own self, in that we are all vulnerable to acting against our own self-interest, due to chemical imbalances in our brains which are often only temporary in nature. We need to be on guard for these scenarios to prevent us from financial disaster.

The internet is replete with so-called "Karen" videos which show middle-aged blond women screaming at retail service workers. These women aren't necessarily unhinged - well, perhaps some of them are - but what probably is happening as they are in the onset of diabetes or are having a low blood sugar situation, probably aggravated by some wacky new fad diet they've latched onto. Alternately, they may be severely dehydrated.  All these things can give you a splitting headache and make you angry at the tiniest little thing. And in the retail environment there are a lot of tiny little things to make you angry, often by design.

That is the classic way car dealers screw their customers. They hold them hostage at the dealership for hours on end, often claiming their trade-in car has been lost or something, or they need to evaluate some paperwork or whatever. The idea is to get the customer there so long they become dehydrated and have low blood sugar and get angry and then feel ashamed of themselves so that are willing to sign any document just to make the deal go through.

Other retailers do similar things. Furniture stores which finance purchases often keep their customers waiting for long periods of time so they'll finally accept onerous terms they wouldn't have accepted at the get-go. One has to wonder: why does it take three hours to buy a sofa?

There are also chemicals that people willingly take to alter their perception and mood. Alcohol, is probably the most common of these. As I've said before, alcohol is a gateway drug to fast food. Get drunk enough, eating a whole pizza sounds like a good idea.  But all jesting aside, alcohol has ruined the mental and physical health of millions, destroyed families and careers, and for what?  A few fleeting moments of pleasure.

But other drugs have similar problems. Marijuana may seem harmless enough at first, but I've noticed a tendency among chronic marijuana users to want to blame all of their problems on somebody else in the world. Nothing they ever do is wrong. Their boss is an asshole, their landlord is a jerk, and their ex-girlfriend was materialistic bitch.  And of course the government is vile and corrupt for wanting all those student loans paid back. Why won't anybody cut them a break?

And of course, other mood-altering substances can cause just outright derangement. We saw in succession the problems that happen with cocaine and crack and meth and amphetamine and opiates. Otherwise rational people became very irrational in short order. People lose jobs and careers and families, and devolve into crack whores or petty thieves just to feed their habits. Is interesting how quickly the brain can devolve with drugs like that.

I mentioned many times before that I believe that mental hygiene is like personal hygiene - you have to work at it. You have to be on guard for your brain going off the rails, and then steer it back on track.  Maybe you can't think your way back from schizophrenia, but you can avoid obsessive-compulsive situations by avoiding things like casinos and bars.

As I noted in my previous posting, obsessive compulsive behavior can be used by third parties to exploit people against their own self-interest. It may seem like your own original idea to spend eight hours a day playing a video game or excessively putting coins into a slot machine, but neither is really enhancing your life very much. Perhaps these things can be done in moderation, but when they become an obsession, they can be very damaging.

But then again, perhaps it's not possible for us to ignore these obsessions. Perhaps the chemicals and electrical signals in our brain so overwhelm us that we are compelled to do these things against our will. I would certainly hope not. Because I would mean that self-determination is a lie, and thus we are all predestined to fail.

And I can't believe that is true.