The Gay-Nazi Connection and the Demise of the EU 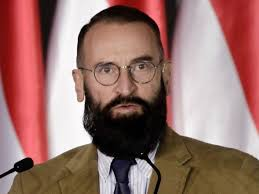 We shouldn't act shocked when the homophobic right-wing politician is literally caught with his pants down.

People chuckle, as they did when Larry Craig, a right-wing "family values" Republican was caught in an airport restroom, literally with his pants down.  We act shocked, because these are people who in public express very anti-gay values, but in private, seem to go hog wild with the man-sex.

I noted before that this is not an anomaly.   It seems that the pressures of "living in the closet" force a lot of people to overcompensate by being homophobic.  They think that "no one will suspect" if they are virulently anti-gay.  But it usually backfires in a big way.  If you want to spot the closet gay - at work, at school, at church, in politics, whatever, just look for the fellow shouting "faggot!" the loudest.

It is a pattern. Joe McCarthy, Commie-hunter, saw his downfall when he took on the US Army - because the Army wouldn't let McCarthy's boyfriend out of the service.  McCarthy's attorney, Roy Cohn, was very anti-gay, and insisted up until his death from AIDS that he wasn't.  As Roger Stone (another closeted or not-so-closeted bisexual) put it, "Roy wasn't gay, he just liked having sex with men!"

And I guess if you are a right-wing Republican, this is how you compartmentalize these things.   But it isn't emotionally healthy.

The list goes on and on. Every year, it seems, some religious figure or evangelical preacher who decries homosexuality from the pulpit, is found in a motel room with a rent-boy. Catholic priests rail against sin from the pulpit, and then bend over an altar boy (or each other) in private. Celibacy is not a normal human condition - you suppress the sexual urge and it will later explode.

Even Nazis - especially Nazis - were queer. When the SS came for Ernst Rohm, head of the brownshirts, they found him at a hotel, in bed with three young men.  I suspect a lot of these modern Nazis are the same as well.

It is a dangerous thing, I think, because in order to deny their most basic (and undeniable) urge - sex - people will go to extremes.  And as I noted before, one easy way to manipulate people - as every major religion has done since the dawn of time - is to tell people their basic instincts are evil, deny them sex, and watch them go insane.  Tell people they are worthless pieces of shit because they have an overwhelming urge to have sex - but that they will be forgiven if they follow you - and you can rule the world.

But what is up with this virulent homophobia in former Eastern Bloc countries?  We see the same thing happening in Poland, where homophobia is rampant, and the new government-for-life is passing laws, and like Hungary, enacting a new Constitution, that codifies these anti-gay stances.

Well, I think the Russian Internet Research Agency is at work here.  If you were Vladimir Putin, what would you want?   You'd want your satellite countries back - for sure!  And you'd be awfully worried that the former "Eastern Bloc" was joining the European Union, as Poland and Hungary have done, and as Turkey has tried to do.   You would feel surrounded by the enemy, only a few miles from your capital.

So, undermining the EU would work in your favor.   But how to undermine the EU?   I mean, it is a much better deal for any country to join the EU than to be in the orbit of Russia.   You'd have to work hard at this - change public opinion in both the countries you want back, and change opinion in the traditional European countries.

Enter Brexit and Homophobia. The UK, which in the past has had no trouble absorbing immigrants from India, China, and the Caribbean, is suddenly becoming xenophobic.  Since EU membership allows for free migration within the bloc, many in Poland migrated to the UK to seek out better economic opportunities and more freedom.  A lot of the anti-immigrant rhetoric with the Brexiteers is directed at Poles, and even some violence and vandalism.  For some reason, folks in Britain still want to go for Indian take-out, but not for Polish sausage.

Where is this hate coming from?  It has been documented that in addition to trying to influence the 2016 US election, the Russian Internet Research agency was also pushing the Brexit narrative on social media, and in online discussion groups.  And we now realize that much of what we "think" online is often manipulated by the echo chambers of social media. Even today, we have this "Qanon" nonsense,which clearly is coming from Russia.

It is a classic play from The Art of War - undermine your enemy from within, and they will collapse and when you invade, no one will bother to defend the country.   It works, time and time again. One of the central tenets of Trumpism is to withdraw from the world stage and let China and Russia take the lead - as they are both doing, Russia with its military adventurism, China with its "Belt and Road" (and bankrupt your country!) initiative.  "Hey, let us build a railroad through your country so we can ship things to Europe and make a big profit!   And you can pay for it with money you borrow from us!" - people are just now starting to see through that deal.

But getting back to the EU, it is genius how Putin has used our liberal Western values against us.   I think a lot of this push for transgender bathrooms and other hardly-pressing issues is being amplified again, by Russian trolls.   And in the former Eastern bloc countries - many of whom have very religious backgrounds - it isn't hard to push a homophobic agenda.   Conflict ensues as these Eastern bloc countries will refuse to go along with "human rights" agendas of the West.   It is only a matter of time before Poland and Hungary exit the EU - followed by other countries.  Turkey will simply not complete the process of joining, as Erdogan has pushed the country far to the right - and wiped out its famously secular culture.

Anyone with half a brain can see this happening.  But few want to confront it.  And of course, Russian trolls will claim "You're seeing a Russian behind every tree!  Talk about conspiracy theories!"   But the Russian Internet Research agency is not a theory or fantasy, but a fact.  Interference in local politics isn't hypothetical, but well-documented. It's also rather obvious in many cases, as the postings are in poor English and tear down the US and laud Russia.  I mean, talk about obvious.

It also is obvious as to who this all benefits - Putin would be an idiot not to take advantage of these natural divisions and amplify them.  And Putin is many things, but unlike Trump, not an idiot.  I mean, this is a guy who poisons his enemies with nerve agents and Polonium!

We know this is happening because our own security apparatus has documented it.  But we also know these kinds of things happen because the United States does or did similar things but just hasn't been as good as the Russians as of late.  We have used propaganda and influencers in countries all over the world, to steer public opinion and turn elections - sometimes by force.  For people to claim that Russia doesn't do this, well, come on guys, that's just too obvious a troll.

This leaves the question, what can we do about it? Probably nothing at this point.  Four years of the ultimate "useful idiot" has given Russia all the maneuvering room it needs. Poor Joe Biden will be in the hot seat as Hong Kong is absorbed into China, and Taiwan is invaded and conquered.  Russia will be ascendant in the middle-East. The Ukraine will fall. The EU will break apart as these newly minted members renounce their membership, literally over religious differences - and these Eastern bloc countries will re-align with Russia.  The Brexit cliff will come and go, triggering a recession in the UK and killing off what little is left of "The British Empire". When people talk about "The City" in the future, folks will think they mean London itself, and not the financial hub of Europe.

It is sad to watch.  Europe had a chance to unite, and the EU was a beacon of hope that all these disparate countries, which have been at war with one another, at one time or another, for centuries, could finally unite in peace.   Freedom and basic human rights could have prevailed across the continent.  And it was all thrown away - and for what?  Because they disagreed about gay adoption rights?    I mean, that just will sound so stupid 50 years from now, when kids are reading that out of a textbook.

But again, this isn't the first time in history that sex and sexuality ends up being used to coerce people.   Convince folks that their basic urges are bad, and their only hope in redemption is in joining the pitchfork parade, and well, it pays to be the guy selling pitchforks.