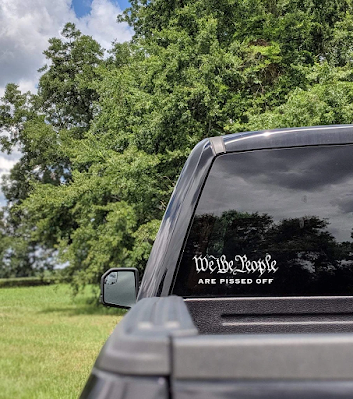 Being angry all the time only serves to blind you to reality.  Anger politics favors the powers-that-be, at your expense.  Left or Right, it doesn't matter, they just want you to get riled up.

In the campground across the field is an older motorhome flying a Trump flag.  People stop by on occasion - perhaps they are planning another insurrection.  One fellow who drove in had a sticker that said, "We the People... are pissed off!" which I thought was odd, as he was driving a brand-new pickup truck, and was clearly well fed.  What was he pissed off about again?

It is no different than the folks in Ithaca, New York, who have bumper stickers saying, "If you're not outraged, you're not paying attention!"  Mark and I once joked that when Ithacans buy their new Subarus, the dealer will carefully remove the bumper-stickers from their trade-in and re-apply them to the new car, for a small fee.  Or perhaps they could offer "sticker packages" for various political stripes, to pre-apply to the car before delivery.  Left-wing or Right-wing, it doesn't matter, you just need to plaster the back of the vehicle with crazy.  It could be a decent business model - and it's yours, for free!

But make no mistake about it, anger politics either attracts crazy people, or it makes normal people go crazy.  Consider this fellow - the Bradley Manning of the far-right!  Wanted to blow up a mosque because it was an affront to his Christian beliefs, but at the same time, wants a sex-change operation.  Now he will spend 50 years in a women's prison.  Time to transition to Lesbian! 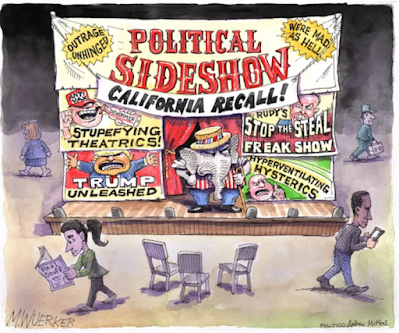 Democrats have their out outrage sideshow as well.  Best to ignore that, too!

So why do both parties do this?  Why do they cultivate outrage and what are the consequences of this?  Well, the latter, we have seen - everything from attacks on the Capitol, to someone shooting up a Congressional softball game.  People actually buy into this nonsense, and fail to realize it is window-dressing.

But the why is money.  Every day, in my inbox or SPAM box (because I mark 'em!) are pleas from various Democratic politicians.  I'm on a mailing list - and not by choice.  Each e-mail is designed to alarm me - and of course ask for money.  Trump will be reinstated unless I donate $10 by midnight tonight!  The election of 2022 will be lost unless I donate NOW!  Never mind the election is a year off.  We need the money!  And some of these organizations have odd-sounding names and I'm not sure if they are even legit.

But even the legit ones go into survival mode, and you don't survive and prosper unless you can panic your supporters.  It is the classic page from the NRA playbook - "The Gubment is coming for your guns!  Unless you send in money NOW, your rifle will be confiscated by Nancy Pelosi!"  And people believe that.  Right or Left, it doesn't matter, but the right lately has been honing their techniques pretty well, and it was the Right who came up with the "Prayer in School" and "Right to Life" and "Coming for your Guns" messages that resonated with the "low-information" voters so well - something to get people not merely to vote, but to get outraged - all while ignoring real issues and real policies that often work against their own interests.

Organizations go into self-preservation mode, and just as the NRA folks started wallowing in the cash (as the United Way people and the NPR people did before them) many liberal causes are finding out that the leaders of a PAC or organizing group can take home six or seven-figure salaries with not a lot of effort.  If you can get a million people to send you ten dollars, that's the trick.  Take a little from a lot, and no one will notice.

But anger politics doesn't just affect your pocketbook through donations and yard signs - indeed, this may be a trivial amount of money for some folks - although others will pour thousands of dollars they can ill-afford to lose, at political causes or evangelical churches, which to some extent, is a redundant statement these days.

Yes, churches too, have found that alarmist messages puts butts in the pews.  When I was a kid, you went to church and the minister told you to be nice to people, because Jesus said so.  Then he would launch into a boring sermon that put half the congregation to sleep.  Not surprisingly, attendance in the 1970's started to taper off.  But a new breed of "evangelical" churches with funny names came into being.  They preached that the world was going to hell - or would end soon - and you'd better do something about it, buddy!  Even conventional churches jumped on the bandwagon.  A friend of mine told me she voted for Trump because her (Catholic) Priest said to do so - during a church service!  Politics and religion are one and the same, today.  And again, the sense of urgency is driven home.

It is,of course, a classic marketing technique.  You are selling cars and a "prospect" seems interested in your De-Luxe 2022 Hupmobile.  But he dithers.  Maybe he should think about it.  "Well, you know," you say, "There was a fellow in here the other day excited about buying this very car, and they didn't make many in chartreuse!   If you don't buy today, I can't promise the car will be here tomorrow.  And I can't promise when we'll get another one in here just like it - if ever!"   Sale closed!

So these e-mails I get, don't talk about 2022 like it is a year or more away, they talk about it in terms of midnight tonight.  They compare their fundraising goals with that of Republicans,or recent poll numbers - as if those were the elections, not what happens at the polls (something both parties seem to conveniently forget, from time to time).

But getting back to personal economics, how does this harm the individual, other than the cash spent on Trump signs or "Coexist" bumper stickers?   Well, I think there are several ways is harms people.  First, it degrades one's mental health.  As I have noted before, mental hygiene is like personal hygiene - you have to work at it.  When you find yourself going "down the rabbit hole" (and we all know when it is happening, too - don't deny it) one has to pull back and think where this is going.  We all get upset by politics or stupid human behavior.  The guy in the car ahead of you cuts you off, and you wish you had a missile launcher mounted under the hood, so you could blow his car to smithereens and drive through the cloud of wreckage.  But that's just a childish revenge fantasy,not a practical solution to the rough edges of daily living.

When people buy into these extreme political views, they start to lose their minds.  And this means losing friends, family members, spouses, jobs, and even careers.  Some of the people arrested in the January 6th insurrection - including the "Qanon Shaman" claim they have had a road-to-Damascus experience and now realize they have been snookered.  Whether they are sincere or not, I do not know.  I am sure some are - ordinary people who now realize they have lost their jobs (some of them actually cops, too!) and careers as a result.  No one will ever hire them - or it will be hard to find a job - when "insurrectionist" is on their resume.  They've destroyed their lives, and for what?  So some Jackass at Mar-A-Lago can call them a "political prisoner."

But the same is true for leftists.  We saw in the 1960's, young people threw their lives away for "SDS" - to end a war they never were in danger of fighting in. They became criminals - some killed people - some spent decades in jail - some their entire lives.  And for what?  It isn't like anything they did accomplished anything.  By the way, notice how the link above include a pop-up window exhorting you to donate $10 to the cause....

People get caught up in these political "causes" and damage their own lives.  I know in my own family, this was true.  My elder siblings bought into this idea that "materialism" (not being poor and destitute) was somehow bad, and thus rejected advancement and success.  My brother lived in an unheated barn in Vermont for a decade, following the orders of a sketchy "Guru" (who even looked like Manson) instead of advancing his own career.  It wasn't until I was in law school that he decided, two decades later, to go back to college and get an advanced degree.  My poor (in every sense of the word) sister renounced materialism and married a man who could barely provide for himself, much less a family.  But that was better than marrying some bourgeoisie executive who would have taken her to the Opera.  Too late in life, she realized the error.  But you don't get a do-over in life.

Myself, I derailed my own career with 10 years of drug use.  It was only my hard work and strong personality that saved me - as well as going to work for General Motors at age 18 - and realizing that not being poor and wanting wasn't something evil, but in fact, quite the opposite.   It took me a long time to realize that pledging your life to "causes" was stupid and something that only losers in society (usually middle-class losers, too) do.  The revolutionaries in any society don't come from the lower classes - they are the failed sons and daughters of the middle and upper classes.

And too late, they discover that their efforts for the "lost cause" were futile.  Ask Trotsky about that.  The revolution didn't quite turn out the way he thought it would, and he went from being a hero of the people to an enemy of the State.  And speaking of "lost causes" - how many dirt-poor Southern sharecroppers lost everything - including their lives - fighting for an unjust cause that was not even their own?  The vast majority of soldiers in the Confederacy didn't own slaves and never would have.  Their officers, of course, did.  These poor dirt-farmers gave their lives to support an economic system that was exploiting them, as well as the slaves.  It made no sense, but you can get people to do anything in the name of  "patriotism".