People Are Their Own Worst Enemies... 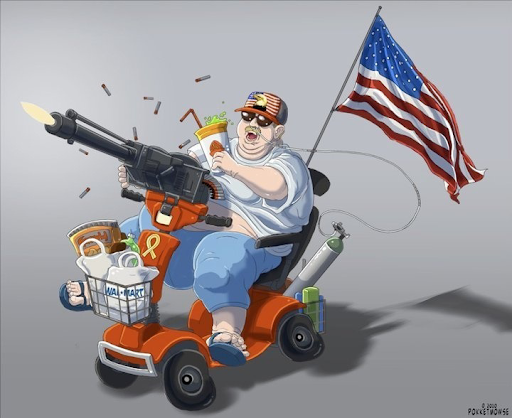 I met a man recently, whose only enemy was himself...

People are their own worst enemy, they say.  And it is true - we all do self-destructive things.  The key, I think, is to do fewer of them.

I ran into a guy who was on a one-way ticket to a personal hell.  He was at least 150 pounds overweight - his belly "dunlopped" over his belt, and I am sure he hasn't seen his own penis in years - at least without a mirror and without holding his belly flap up.  Yea, I know, gross - and that kind of limits your romantic opportunities.  And he was a nice guy, too!

The excess weight was wearing on his knees, as you might expect, so he was wearing a knee brace.  He told me he was out walking - 22,000 steps! - and I mentioned that maybe if he was having knee problems, that wasn't a swell idea, until he lost some weight.  But never-mind, he's on Oxycontin, so he's feeling no pain as he walks.  The damage to his knee joints is still occurring, he just isn't feeling it.  And when he comes down from the Oxy, the pain will be unbearable, so he will take more Oxy.  You know the end game on this - it is often fatal.

I suggested maybe he try alternatives, like CBD oil (and a diet, for chrissakes!) but he would have none of that.  "I am against drug use," he said, without irony. Oxycontin wasn't a "drug" but a prescription.  So it's OK because its from a doctor who went to a big-pharma convention in the Bahamas, all-expenses-paid by the Sackler family.

Of course, the perils of Oxycontin and other opiates are well-known today.  Well, they were well-known 50 years ago, but for some reason (a money reason) people decided that Heroin was no longer addictive if precribed.  Actually, the "science" on this is frightening.  I read an article about this once - how a letter to a science journnal that suggested that the addictive qualities of opiates were overstated and that doctors should not be "afraid" to prescribe them, was, in turn, cited as "authority" in dozens of subsequent articles (which in turn cited each other) and created this new era of opiate addiction, which put billions into the pockets of some pharamceutial companies (and one family in particular).

"I believe the science" people say - often people without science degrees.   So yea, I get it that maybe being skeptical of the medical industry isn't a totally unreasonable thing.  And that is the danger of things like ads for prescription drugs and the opiate epidemic - it degrades our entire faith in science and medicine.  Hey, if a doctor is willing to turn you into a junkie so he can pocket a few bucks, who is to say vaccines don't cause autism?   I don't believe the latter, of course, but I can see where it might come from.

You have to be your own patient-advocate, and not take anything a "doctor" says as gospel.  Get a second opinion.  Think about things.  I had a doctor tell me that only a vegan diet made sense - and he charged me $5000 for an unnecessary heart procedure.  But he won an award for it - after all, he was the first doctor to ever find a heart in a lawyer!  Nobel Prize!   I kid.  He's a good doctor, but he has his own wacky opinions about veganism and cheese.  Funny thing, though, those French love their runny cheeses, and yet their incidence of heart attacks is lower than ours.  They also live better.

It was distressing to see this guy driving his car off a cliff.  It isn't hard to predict how his life will turn out - and he's only in his mid-40's.   The oxy thing will take over - it almost always does - as the pain gets worse and worse.  His "cure" of walking 20,000 steps a day will only make things worse.  He will seek solace from the depression by eating more bad food.  Eventually, he will be out of work more and more for medical problems, which may lead to him losing his job and going on disability.  I see a little electric scooter in his future.

That is, of course, if he doesn't die of an opiate overdose first.  What ends up happening in many cases, is that these folks build up a tolerance to the drug and want more and more.  The fellow admitted he was "flying" on Oxy at the time and "in outer space" and "feeling no pain" and it is a nice feeling, too.  That's why it is so addictive.  You want to re-live that feeling, again and again.  So he goes back to the doctor for more pills and an increased dosage, until the doctor cuts him off.   So he seeks out a second doctor, or a third.  No shortage there - our small town has a half-dozen "pain management clinics" and "sports medicine practices" - even though there are few sportsmen in our area.   If you thought the opiate epidemic was over, think again.

But eventually, they succumb to the illegal side of the street.  The Chinese and our friends in Afghanistan are pumping fentanyl and heroin on to the streets of the USA.  Eventually, the man I met will find someone selling this shit.  It killed Prince.  It killed that kid from Glee.  It can kill anyone.

So what to do?  Do I try to "rescue" this fellow from himself?  Hell no.  Like I said, when I suggested CBD oil (which to my knowledge has yet to kill anyone) he dismissed it as being a "drug" and he was against drugs.  Where are you going to go with that?  You are just shouting against the wind.  Like with Alcoholics Anonymous, you have to let them find their own rock-bottom.

And besides, what about our own situation?  Are we in a position to preach?  I recently had a mild diverticulitis attack, after attending a party where we, well, overindulged.  I cut back on food and gave up drinking for a week and funny thing, I felt better.  Funny thing, too, once the pain went away, I was "high as a kite" on my own endorphins, which is why I understand how Oxy could be so addictive.  You are indeed "flying high" and feel invincible and go back to the same bad behaviors yet again, learning nothing in the process.  We are all our own worst enemy.

Maybe that's the only thing we can take away from all of this. Maybe this can serve as an instructional lesson for us. We can examine our own behaviors and see where we, too, might be self-destructive. And maybe we can try to change these behaviors before they destroy us completely.