Have To Change The People First 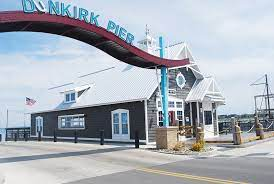 We were visiting Dunkirk, New York, which has a nice State Park and a surprising number of wineries.  Living in the Finger Lakes, we thought that that region was the ne plus ultra of winemaking in New York State, but it seems they grow even more grapes along the shores of Lake Erie, from Western New York, all the way into Ohio.

Dunkirk itself is nothing to write home about -  just another in a series of tired rustbelt, upstate NY towns that have seen better days.  The town is dominated by a huge power plant, which mars the lakefront.   It apparently has been converted to natural gas, as the train tracks that lead into the plant have a hefty coat of rust on them - no coal trains going this way, recently. Signs dot the homes in the suburban areas, imploring us to be against windmills on Lake Erie.  Not hard to spot who works at the power plant, eh?

They have a nice pier downtown - the only nice thing I could find downtown - with some small restaurants and even a nice bar, playing the Bills game.  Good food and cheap, too!  Lunch for two for under $30 - a pleasant surprise for a change.  Helps to split an entree, though.  Anyway, we took a walk on the pier, which you can also drive on - which seems to be a more popular choice.  Everything is new and reeks of State money.  Fancy fixtures and railings and bench seats and historical plaques.  All very well done.

But for some reason, the locals decided it needed a good smashing, and they've been at it, tearing out the mesh on the railings for some reason. Nearby, a collection of Catholic altar candles and a worn photo of a young man.  I looked it up online, and apparently two young men went into the water, and only one came out - no other word on what happened. Very sad.  Very interesting that there is such a huge Hispanic population in this out-of-the-way corner of New York State.

In the restroom urinal was as "Andrew Cuomo aiming target" pasted to the back of the urinal. Quite ironic, as I am sure these renovations to the pier involved a lot of State money.  I mean, not that I am a fan of the former governor or anything.  Speaking of which, when we checked into Green Lakes State Park, the sign had the usual banner at the bottom naming the governor - the new governor. Changed that out pretty quickly, didn't they? How much State money is wasted - in every State - putting the governor's name on stuff they have nothing to do with?  When you come to Georgia, there is a "Welcome to Georgia!" sign with "Billy-Bob Humbucker, Governor" sign below it. Why does it matter to people traveling from out-of-state who our governor is?  Pure narcissism. And putting the governor's name on State park signs?  Expensive narcissism.

The point is, they spent a lot of money on this pier, and it is nice.  And the first thing the "locals" did was to smash it up as much as they could, or hang out at night, or drive through (not stopping) playing loud music from their cars. You can change the physical surroundings, but that doesn't always change the people.  This is why we can't have nice things.

Much ink has been spilled about public housing, and how "brutalist" architecture makes people in public housing feel inadequate, and thus act out by vandalizing their own homes, and turning to drug use and petty crime. It's all the architect's fault! That is an interesting argument, but I wonder if it really carries water.

When we moved in together in Alexandria, Virginia, we moved to Hunting Towers, which was a three-tower complex on the Potomac built in the 1950's with money from Fulgencio Batista, the Cuban dictator.  It was named Hunting Towers for nearby Hunting creek, but today it is called Bridgeyard for some reason.  Well, the reason is, it is right next to the Woodrow Wilson Bridge.  So close, we joked, that we could catch hubcaps flying off commuters' cars onto our balcony as they hit the potholes on the old bridge.  But that was the East building - torn  down to make room for the new bridge, and now there are only two buildings left (Mark and I later moved to the more tony West building - underground parking no less!).

The place is gussied up nicely for a 1950's apartment building, and they have good tenants and reasonable rents.  But it does look a lot like a public housing project that Robert Moses would have built.  Plain and made of brick, and story after story of sameness.  So... why didn't we all turn into "gangsta's" and deface the elevators with graffiti?

That's the question - you answer it, because I don't have a concrete answer.

Perhaps, though, it hinges on people.  You build a super-nice place for super-nice people and they treat it nicely. You build nice things, particularly free things for not-so-nice people, and they wreck them.  The free part is essential, too.

We paid what we thought was a lot of money for an apartment back then ($900 a month - but that was 35 years ago. Today they start at about $1300 - still pretty cheap!). So we treated the place with respect, even if, at the time, it had hot-and-cold running roaches.  We were just grateful to find a reasonably-priced place so close to Old Town - with a view of the river, no less!  Even then, housing accounted for a big chunk of our income.  Recall at the time, I was starting at the Patent Office at $22,000 a year.   $900 a month was a lot!

Today, the place looks pretty upscale, with new lobbies and gardens and whatnot.  But the buildings still look, well, like public housing.  Get a two-bedroom unit with a balcony view of the river (hold out for underground parking spaces - preferably two of them!) and you've got a nice crib near DC and Old Town for not too much money.

(By the way, it wasn't hard to spot our unit on the 6th floor, from the ground.  Just look for the balcony with all the plants on it!).

Of course, there are plenty of other factors, and I guess that is my point.  If you grow up in poverty, you don't see these things - and you aren't reading my blog.  Smashing stuff and spraying graffiti seem like background noise - something your peers do and you do without thinking.  Some even argue these are cultural values that need to be respected and even admired. "He beat that guy's skull in real good!  10 points for style!"

I am not so sure.  Visigoth values should not be glorified.  But then again, we live in an age of Cultural Belligerence where harshness is the new love.  So get with the program, Bubby!  Down to the gym and gun store with you!  And on the way back, stop off at the "Ram" dealer and trade-in that Prius for a real manly truck!  Even if you are a woman.  Time to get butch!

Appreciate and cherish nice things?  That's for sissies!  Go ahead and smash it!  Smash it up real good!

In this age of unreason, it seems even more essential that we change people, rather than merely change their environments. This isn't a different thing than Qanonsense, Antifartism, Anti-vaxxers, or "Free Annual Guaranteed Gubmint Check" thinking.  It is the same damn thing - the decline and fall of a civilization from within.

And all the infrastructure money in the world ain't gonna fix it, if the Vandals tear it down faster than we put it up.