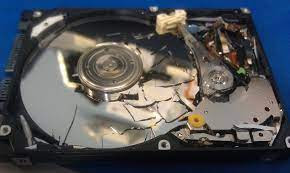 Trying to preserve data is an exercise in futility.

One of my old laptops crashed.  I was running Chrome and it locked up and when I tried to CTRL-ALT_DEL nothing happened and it went to a black screen.  I was able to reboot and the first thing I did was back up my data onto one of two 1TB drives I keep around.  I ran a diskcheck and it found some bad sectors or something and just to be sure, I ran it again.  That may have been the problem.  I also searched online and one site recommended de-activating hardware acceleration on Chrome, which seemed to help.

Anyway, my data is backed up - it is on the drive on this laptop, the other laptop (which is a mirror of this one) and on two 1TB portable drives.   All very well and fine and all, but hard drives do wear out.  Both of these laptops are on drive #3, mostly because they are over a decade old, and also because I upgraded them to the maximum disk size supported by the machine (500 GB) which is kind of quaint.

I have replaced the keyboard on one, the motherboard on another, hard drives (x2) on both, and replaced and upgraded the memory (8GB maxed out).  They just keep on running and since they are so old and obsolete, the parts are cheap on eBay.  I think I paid $5 for the keyboard or something ridiculous like that.

But it got me to thinking, human beings have always tried to preserve data over time - and over time, it has been a futile endeavor.   Early man made cave paintings recording the results of a hunt.  And some of those survive, but are very fragile.  If you go to France, you can see them - but what you are seeing is actually a copy painted on an adjacent cave.  You might say, it is a backup copy.  But as civilization developed, people created more robust and elaborate forms of data storage.  Cuneiform letters could be impressed into a clay tablet with a stylus, but tablets could be dropped or broken or simply crumble to dust over time.   Reeds were used to make early papyrus paper and inks developed to record events in hieroglyphics.

Of course, for important data, sometimes it was actually carved in stone.  But that doesn't mean it survived.  Sometimes people would erase data - striking out the name of a disgraced former emperor.  Others simply walked off with the stones to use as foundations for buildings, after empires fell.

The printing press and book-binding created a more permanent record, not because the hardware was more robust, but only because when you print 1,000 copies of a book, at least one is likely to survive the ages.

Film was the next technology used to preserve data - in great detail.  Glass plates from the early days of photography are remarkably clear, more than a century later.  Movie film stock hasn't fared as well - what didn't catch fire wasn't preserved or retained, and what survived was often damaged and had to be "restored" for us to watch today.

Of course, in our electronic age, we have tried to find more permanent means of storing data.  Primitive punch cards and punch-tapes gave way to electronic data storage in huge hard drives and later on, in portable floppy drives.  But of course, magnetic bubbles on media are always subject to degradation, particularly from electromagnetic fields.  One strong magnet is all it takes.

Or someone might simply erase it.  The master tapes of the Apollo 11 moon landing were recorded over, only because the Engineers at the Australian downlink assumed that someone else had recorded it further down the line and what's more, who would want to see this twice? Tape is expensive!  Re-use it!  Of course this has fueled a number of conspiracy theories, but the theorists conveniently forget that video of subsequent missions was properly archived and is quite clear.

Optical drives seemed like a way to permanently store data.  Since they were no-contact, there was nothing to wear out, and the data was immune from magnetic interference.  Alas, it appears that even CDs and DVDs are subject to "rot" or at least the cheaper ones which are plated with aluminum instead of gold.

Solid state memory seems very stable, but my experience with SD-drives has been they, too, wear out over time.  The SD chips in my dash cameras are continually overwritten with video data as I drive.  After a few years, they simply give up the ghost.

And of course, the "cloud" is very unreliable, as you are dependent on the company who stores your data, and if they go out of business or change their business model, it all goes away.  And those "servers" the "cloud" uses to store data?  More hard drives.

But that doesn't mean data will be lost forever - like with bookbinding, electronic data storage has meant that we can make multiple copies of files with the click of a button - to the point where maybe dozens or even hundreds of copies of files might be made.   Moving forward, all data that has survived from the earliest point of mankind - including extant cave paintings - will be preserved, in some fashion or another, unless some electromagnetic pulse takes it all out.

This got me to thinking, as I closed in on my 5,000th posting, what would happen if Google decided to erase my blog or it somehow became corrupted.  Is there a way of backing it up?  Turns our there is, sort of.  In Blogger, there is a "backup" feature that backs up the blog into an XML file onto your computer.  It was about 78MB in size and when I tried to read it (a nightmare of HTML coding) I realized it wasn't a backup of the entire blog.  In fact, I uploaded it to a new blog (labeled BACKUP BLOG) and realized it only went back to 2017 and had about 2,0000 postings.  Why this is, I do not know - I tried this several times with the same result.

There is a way to back up the entire blog, but I haven't been able to restore it from that backup. Google has a feature called "takeout" which did backup the entire blog into an "ATOM" file.  When I read the file, I could find the first posting through keyword searching (it was a 780MB file!).   I tried to "restore" the file to a new backup blog but it bombed out.  By the way, you can "convert" an ".atom" file into an XML file by changing the file extension, apparently - or so they claim.  I am not sure why it will not backup from this larger file, only that perhaps it is simply too large.  I may try to edit a copy of the file to include only a few hundred entries and see if that restores or not.

But there reaches a point where you have to let go of data.  The truth is, most of the data we accumulate is of little use.  I noted before how we have a storage container the size of a child's coffin, full of old photos and mementos -  it is so heavy, I cannot lift it.  Over the last decade, we have never bothered to even look at it - such is the nature of memory.  I mean, sure, it is fun and all to reminsce about the old days, but it can literally suck up hours or your life to no avail.  We've tried "organizing" some of the photos, but frankly, it was a daunting task and we realized that 90% of them are not worth looking at.  We did make an effort to throw away out-of-focus pictures or photos that were just uninteresting (an unidentified landscape, for example).

Trying to preserve data is, to some extent, an exercise in futility.  The primitive who made that cave painting in France thousands of years ago didn't expect it to end up as one of the oldest records of mankind.  He never said, "Let's preserve this for posterity!"   Rather, it just happened to be something that survived and wasn't destroyed in the interim by humans or nature.   And that is the extent of how much of our data is retained.  I mentioned before that the stuff you see in museums isn't typical of what people had in days of yore but rather what they stuffed up in the attic.  Everyday clothes were worn and worn out and discarded.  Ceremonial clothing went up in the attic and survived.  To hear the docents tell it, our ancestors plowed the fields in elaborate colorful garb.  I suspect such was not the case.

It makes you wonder what data and artifacts will survive 1,000 years from now.  Maybe the Christmas decorations in your attic.   Maybe some oddball painting that was a gift from Aunt Edna and were too ugly to hang up, but you didn't want to throw them away.

And who knows?  Maybe this blog will be the last byte of data harvested from the last expiring server dug up from some Google data center in the year 3,000.  What a deranged perspective that would provide of life in the 21st Century!