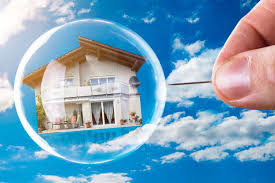 When it costs more to own a house than to rent it, housing is overpriced.

A recent article in the New York Times notes that as of April, it costs more to own a home than to rent one, in many markets.  We've been down this road before and it was one of the very early topics of my blog, over a decade ago.  Back then, we were just coming down from the real estate debacle of 2008.  We lived in South Florida in the early 2000's and saw housing prices skyrocket 20-30% every year.  And while rents went up, they didn't go up as fast as housing prices did.

We looked at houses that cost $3000 a month to buy, but were renting for $1700 a month.  We weren't just talking about a small difference but rather a huge delta - nearly twice the cost for the "privilege" of owning and maintaining a home.  It made no sense at all and eventually the market collapsed.

Why did people pay so much for homes? There were a number of reasons, from mortgage fraud (not what you think it is) to the basic irrationality of human beings.  Everyone was caught up in the real estate bubble and stories about buying and flipping houses were rampant.  Sadly, some folks held out for years and then said, "I guess we better get in on this real estate gig!  Everyone else is making money at it!" - and those were the folks who were hurt the most.

I wrote recently how, this time around, people are using weird loans based on potential AirBnB income projections, to over-pay for houses.  It is a neat idea, but you can only have so many vacation rental properties on the market before it becomes saturated.  I suspect more than one homeowner is going to find their AirBnB projected income to be largely imaginary and the wear-and-tear on the property huge.  It is like driving for Uber - yes, you can make money destroying your car, but you don't make a lot of money and once everyone drives for Uber, no one drives for Uber.

There are, of course, some weird reasons people keep paying top dollar in overheated markets.  For example, people doing a Starker Deferred Exchange might have to buy another property or else face a withering 25% capital gains tax.  So, for example, a landlord has a property in Florida they want to sell.  They "roll over" the proceeds to a house here in Georgia, and avoid capital gains tax.  They then live in the property for 3 out of 5 years and declare it as their personal residence and can now sell it tax-free.  So long as they don't lose more than 25% in equity, they come out ahead of the game.

In some markets, too, people are "buying ahead" of the market.  The cost of rents do go up over time, as well as home values.  So you pay 10% more for a house than you ordinarily should have, but within a few years, you are in a situation of positive equity and what's more, your carrying costs are less than comparable rental costs.  But usually situations like this are only 5-10% deltas over the cost of renting - not the near 100% differences we saw in Florida in 2007.

But the main reason is emotional.  People are emotional creatures and rarely logical ones.  So much is would up emotionally in real estate, which is, for example, why agents call them "homes" and not "houses".  They want to suck you into this nesting idea, and young couples of a certain age fall for this trap.  It is understandable - a young couple is having a baby and owning your own home projects the image of stability and comfort and commitment to each other.  People pine for the family homestead, even if it is just a myth.

So, just as people buy overpriced cars for emotional reasons (to impress people they don't even know), people buy houses for a plethora of emotional reasons.  And yes, status is one of them ("OMG! You're not still renting are you?  All my friends own their own homes!").   People want to impress others with their apparent wealth, and owning a home and a fancy car is one way to do it.  Mark regaled me with stories about recent immigrants in Alexandria, who wanted to buy a certain kind of house - the cheaply built, but expensive-looking mini-mansion - brick on the front, vinyl on the sides.  They would park their (used) Mercedes out front and take a family photo to send to "the folks back home" to show they "made it" in the USA.  And I suppose there is nothing wrong with that, provided they are not bankrupting themselves to do so.

But emotions are eventually checked by logic. There reaches a point where people start to notice prices and the pain of paying them.   It takes a while - the system has a lot of hysteresis in it.  But eventually, something has to give.  With bonds, they talk about the inverted yield curve - when short-term rates exceed long-term rates - as a sign of recession.  I suggest there is a similar inverted yield curve in real estate - when it is cheaper to rent than to buy - it is a sure sign of a bubble, and a sign of recession when the bubble pops and people get hurt.  And when people get hurt, they stop buying stuff, and it has a snowball effect.

I think it is safe to say that given all that is going on the world today -  war, inflation, high energy prices, labor shortage, supply chain shortage, defaulting on debts - that we are headed for recession, if in fact, it has not already started.

The good news?  Eventually markets turn around.  Not much help to the guy who just bought an overpriced mini-mansion or the fellow laid-off from Tesla, but that's all I got.

UPDATE:  A friend of ours, who owns a house in Florida and one "up North" decided to sell both and buy a house in the Carolinas.  They put down a non-contingent offer on the house in the Carolinas before selling their other properties.  They had an offer on the "up North" house but the buyers quickly withdrew.  I feel very bad for them - they now own three houses and the music has stopped and they have no place to sit down.  They were real estate professionals, too!  Did they not see this coming?  When interest rates go from 3% to 6% they thought nothing would change?  I am very sad.

UPDATE: My friends found a buyer for their house at full price no less. So we are all breathing easier and my blood pressure has gone down.

The hurricane in Florida may skew prices further. A lot of people are now homeless or have lost vacation homes and maybe shopping around. I suspect they might even decide to move to Jekyll Island!