Tipping in Theory and Practice 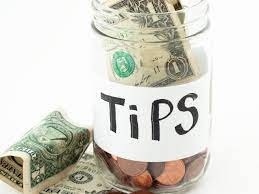 Tipping is a weird American custom but exists not for the reasons you think.

When tourists come to America they are flummoxed by our tipping system.  Who do you tip, when, where, and how much?  And let's face it - giving someone a tip is awkward - it feels dirty almost.  You give a porter a few bucks for carrying your bag and you feel silly handing him money and he feels undignified taking it - but he has to take it, as it is his income.  It makes the economic hierarchy readily apparent, which maybe is partly the point - I am master, you are slave, you do things for me because I hand you money.

And that is the big misconception of the theory of tipping.   If you talk to a restaurateur or someone who favors the tipping system, they will tell you it results in better service.  In theory, the waiter or waitress will serve you better, because they want a good tip.  So tipping encourages efficiency and better service.  You give poor service - you get a poor tip!

But that isn't always the case, and in fact, rarely is.  The amount you get as a tip is disconnected from the work you do.  Some people leave miserly tips - or no tips at all - regardless of service quality.  Others heap generous tips on waitstaff, even if the service was poor.  And much of the service is beyond the control of the waitstaff.  If the customer makes complicated orders and substitutions, they have no one but themselves to blame when it all goes horribly wrong.  Or maybe the cook is having a bad day, or the "back of the house" is disorganized - with entrees coming out at different times or orders being prepared wrong.  It isn't the waiter's fault, but he gets screwed out of a tip either way.

Compounding this are tip-sharing schemes.  There are laws about this - you can "pool" tips between waitstaff and sometimes some of the kitchen staff, but not management.  This hasn't stopped some managers from stealing tips outright or taking a percentage of them (both illegal).  Some restaurants pool tips so the servers each get a percentage of the overall pot at the end of the night.  That might be more fair - and a tacit recognition that the amount of tips left is sometimes a random event, and an unlucky waitress might go home at the end of the night with hardly anything, while someone else wins the jackpot.

Another myth about tipping is that it is a way for the restaurateur to offload his labor costs.  This is partially true, as it makes the entree prices seem lower to the consumer.  Mentally, we as customers don't add in the 15% or more tip to the menu prices, which often escalates the overall bill by quite a bit.

The reality of tipping?  Well, it doesn't so much offload the labor cost from the restaurateur to the consumer as it helps the restaurateur with labor costs during slack times.   Restaurateurs are allowed to pay waitstaff a sub-minimum wage which is only a $2.13 an hour.  The theory is, the waitstaff makes it up in tips and hopefully makes more than standard minimum wage.  In fact, if tips are poor, the restaurateur has to pay the difference to bring the wages up to the Federal standard.

That sounds great, but....  Suppose you work at a restaurant.  You get there at 3:00 PM to set up for the dinner rush.  There are no customers, of course, so you fold napkins and clean tables and set up your "station" or whatever, and get ready for the evening dinner crowd.  You are making the sub-minimum "tipped" wage for this work.  Dinner rolls around and you have a lot of diners who leave good tips.  The restaurateur is supposed to insure that your wages (with tips) amount to the Federal minimum wages.  But since you rolled in a lot of tips, your overall average wage is at or above minimum wage. So the restaurateur is only on the hook for sub-minimum wage.  His actual labor costs are bubkis and you might be only making the Federal minimum wage, even with tips.

That's the other reality of tipping - the amount you make varies wildly with the restaurant type.  Say you work at "Friendly's" (are they still in business?) and your average ticket for two sandwiches and two cokes is about $15.  You might get a couple of bucks in tips.  Now, if you work at Chez Auberge, the fancy French restaurant, where entrees start at $39 and bottles of wine start at $50, your tip for a two-top might be more than the waitress at Friendly's makes in a whole night!  Guess who works harder, too?

Another unexpected consequence of tipping (and other pay-for-play schemes) is that it encourages your server to "flip" tables faster.  If you make an average of $10 per table in tips, you can make more money if you serve 20 tables than 10.  So you don't encourage diners to "linger longer" over coffee if there are patrons waiting to be seated.  And of course, the restaurant owner is delighted that the servers are motivated to flip tables.  More customers, more money!

Sadly, this effect is not limited to tipping.  Many truck drivers are paid by the mile driven (or load delivered) so the faster they drive, the more miles they accumulate for a given time period (between Federally mandated rest periods) and the more money they make.  Sitting in a traffic jam is unprofitable and burning their working hours - which is why you see many a trucker pull over in a traffic jam and take a nap - why waste those working hours?

The interesting thing to me is that people who work in un-tipped services  seem to work as hard, if not harder, that those in tipped environments.  Go to any fast-food place and you will see people humping during the lunch rush.  They have zero incentive from tips to hustle, and yet they do.  Companies that have experimented with abolishing tipping (and paying a decent wage instead - and raising prices to cover the costs) don't report a decline in service.  Indeed, our European friends have some of the best restaurants on the planet and they don't dick around with this tipping nonsense.  Then again, over there, being a waiter or waitress is considered a career, not something you do part-time in high school or as a summer job in college.

Of course, the tipping tradition is so ingrained in our society that it will be a hard drug habit to quit.  The few brave restaurants who have eliminated tipping are finding themselves at a disadvantage.  Some restaurants talk about raising their minimum wage and get push-back from customers.  Patrons don't see the lack of tipping as a good thing - all they see are higher prices than competing tipping restaurants.  Your average human can't figure out the 15% difference in their heads, so they assume the restaurant with the $23 entree is more expensive than the one with the $20 entree plus 15% tip.  "I'm going to the cheaper place!" they crow.

Also, I think a lot of Karens and Kevins (who are miserly tippers if they tip at all) like to use the threat of tips to get their way when they make their elaborate special off-the-menu orders and substitutions.  And sometimes they are explict about this with a server - "do it my way or no tip!" which is an empty threat and results in worse service.  If you are a waiter and someone pulls this stunt on you, you might as well do the bare minimum for them as they are not going to leave any tip.  Better to spend your time making sure your "good" tables are promptly serviced.  Karens and Kevins are going to complain and "ask to see the manager" no matter what, so you might as well ignore their threats (and a good manager would throw their ass out of the restaurant).