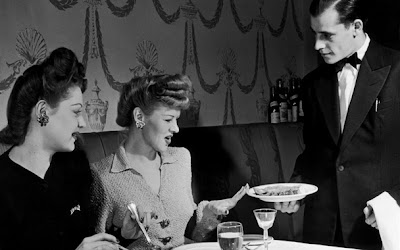 In reading this article on CNN this morning, about how the Groupon thing works from a retailer's point of view, I was reminded how some folks think that being an astute consumer means making a nuisance of yourself and being a cheap tipper.  This is another example of faux financial acumen.

And if you have ever worked in retail, you know what I am talking about.  These are people who want special treatment, special service, refunds when they are not satisfied.  Or as in the article above, people who order one entree and then decide to change their mind after you've made it - hoping secretly that you'll sell them that entree for cheap.

We had this at Domino's - people ordering a Pepperoni Pizza and then when you deliver it, they say "I'm allergic to Pepperoni - I never ordered this!  I'm not paying for it!  And since it is over 30 minutes, I get a free pizza!"

That is not being financially astute - that is being an ASSHOLE.

Or take the lady at a gourmet store who orders soup - and spills it all over her Mecedes and her Mink Coat - and then calls the store to complain and insist that they pay to have the car detailed and the Mink cleaned.  And foolishly, the store goes along with it.

And yet, I know people who do this - act like the Queen of Sheba whenever they are at a restaurant or a customer at another store.  "The Customer is Always Right!" they chant as their mantra.  And unfortunately, some stores go along with this.  But increasingly, more and more are not.

Being a jerk i snot being financially astute.  Sending back food because it "wasn't what you thought" or asking for discounts or refunds you are not entitled to is just being an asshole.  And being a cheap tipper isn't being frugal, it's just fucking some poor waiter or waitress who is trying to make a living.

And oftentimes, these sort of people think they are being financially astute by doing these sorts of things, but at the same time they squander thousands of dollars a month on Cable TV, leased cars, and other crapola (like eating out in restaurants all the time and making a nuisance of themselves).

So why do people do this?  It is the same reason people engage in the Culture of Belligerence.  The annoying customer in the cafe and the jackass in the monster truck have one thing in common - they feel powerless and helpless in a complex technological world.  So they lash out and grab onto any form of perceived power or control they can get.

For the monster truck guy (or loud motorcycle guy) it is the perceived status of being a bad-ass.  For the annoying consumer, it is the perception of having "control" over a financial transaction.  These sorts of people are often NOT financially astute people, and how money works and how finances work are a mystery to them.

So when they engage in a transaction, instead of just seeking out a good deal and making a sound bargain, they feel they have to "put one over" on the company or restaurant they are doing business with.  They feel they are "getting ahead" this way - but the pennies they are "saving" are often not worth the hassle.

Being a customer of any business does NOT mean you get to treat their employees like slaves.  And yet, many people do just that - even people who work in retail businesses.  And the more unempowered the person feels, the more likely they are to make a big deal out of even the smallest transaction.

For example, we went to an ice cream stand the other day.  A poor family drove up in front of us and got in line ahead of us.  They then proceeded to go through the whole menu, asking about what each item was, what quantity it came in, and what the price was (even though they were marked clearly).  This $5 transaction was something they were going to milk - and making the staff pander to them and the people behind them WAIT, was part of the deal.

Fortunately, the customer staff saw this and opened another window.  Otherwise we would have left.  We ordered our ice cream without fanfare - we know what ice cream is, for God's sake, and a $5 transaction isn't worth haggling over - and the ice cream stand staff isn't empowered to haggle anyway.

But that example illustrates how lack of empowerment leads to this sort of odious behavior.  This link lists an interesting example of 16 such problem customers.

Once you understand money and understand how it works - and once you have a handle on your own finances and have accumulated some wealth - you tend not to act in this manner.  Not because you have money and don't need to haggle, but rather because you don't feel powerless and oppressed and feel the need to take it out on some poor waitress.

Faux Financial Acumen is rife these days.  People clip coupons, get flyer miles, cash-back and chase rebates.  And then they act as bitchy customers to get a "deal" and they think this means they are being "astute" consumers.

But not only is such behavior annoying, it misses the mark - by a long shot.  Most people squander money not by failing to clip coupons or by getting a free entree at a restaurant.  The big ticket items are things like Cable TeeVee (where they get all these horrible ideas from in the first place) or leased cars, or failing to save.

And yet, people want to be told that the "secret" to wealth is some "trick" like clipping coupons or putting one over on a restauranteur.  Why?  Because that is the easy answer that weak-thinkers want to hear.

Trying to get good service or good food at a bad restaurant is simply impossible.  And yet many people do just that - going back again and again, because they know the service and food will suck, and they can make a big deal about "sending back" the food.  Just don't go - and let that restaurant go out of business.  Vote with your money - and your feet.

The Groupon Article on CNN this morning was interesting.  The restauranteur found that the people cashing in the Groupons were really cheap and annoying customers.  And no doubt, the customers thought they were getting a "good deal" with the coupons and being financially astute.

But in a way, it is no different than those "coupon books" that people used to sell door-to-door.  You'd pay $10 for the coupon book and maybe get $20 in savings at local restaurants or whatever.  The theory was, the coupon would attract customers to the restaurant.  But in reality, it just brings in Mr. and Mrs. El Cheapo, who buy the minimum price entree, cash in their coupon, and never return.

These sort of gimmicks are no real savings for the consumer (buying a restaurant meal you otherwise had no intention of buying is no bargain, no matter how much you get "off" with a coupon) and no real advantage for the retailer.

And if you think that is being financially astute and is going to put a million dollars in your 401(k), think again.  Because you can't CONSUME your way to wealth!
Newer Post Older Post Home