Did the GTO kill GM? 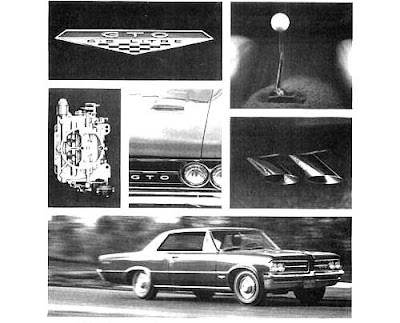 Did cars like the GTO help or hurt GM in the long run?


This article makes the alarming claim that cars like the Pontiac GTO didn't so much save General Motors, as write its epitaph.

I enjoyed the article and I think the author has a point, even if the premise of the article is a bit of an attention-grabber.

I say this,  having worked at GM and gone to their school, General Motors Institute.  Prior to cars like the GTO, GM was trying a lot of esoteric engineering ideas - none of which stuck:


After the muscle car era, GM designed coalesced to a single format - a 350 C.I. V-8 mated to a THM 350 automatic transmission.  Gone forever were the individual engine designs for the different divisions - and you may recall there was a lawsuit about this.

R&D into new engine designs largely languished after that point - GM started selling the same car, in different guises, with the same basic drive-train.  And the differences between the car models and brands evaporated, largely, as they started to all look alike.  The Malibu bloated up to become nearly as large as its bigger sister, the Caprice.  And both were often equipped with the same corporate 350 V-8 and same Turbohydromatic 350.

Now, you might argue that some of this was due to emissions controls - certifying individual engines for different product lines would have been costly.  But much of these changes occurred before major emissions control laws were enacted.

As DeLorean described it in his book, "On a Clear Day, You can See General Motors", the "bean counters" dictated that all cars use as many common parts as possible, to cut costs - in part to offset the huge wages and benefits offered to the Union members.

So performance cars slowly became just plastic body-cladding options packages, and the difference between a Chevy, a Pontiac, and an Oldsmobile faded to the point where people stopped to ask themselves why they would bother to pay more for the same car.

And indeed, DeLorean was part of the problem - redesigning the early 70's Chevies with a "Cadillac" style grill and offering them with a full array of options that until then were available only on Caddies - at about 1/2 to 2/3 the cost of a Cadillac.

GMs few attempts an innovation in Engineering backfired in a big way - the aluminum Vega engine being one of the few innovations of the 1970s, and we know how that worked out.

I think the premise is interesting - and obviously like any well-written article, the author was using drama to make a point.  But it is an interesting point.

Big V-8s mated to Automatic transmissions turned out to be the formula to sell cars - for a while, anyway.   Esoteric overhead cam sixes were not what Americans wanted at the time - until gas went up to 50 cents a gallon.  By that point, GM was tooled up to make nothing but the 350/350 engine transmission package, which went into everything from a Chevy Nova, to a Caprice, to a pickup truck or van.

So when people decided they wanted a quality smaller car, well, the Europeans and Japanese were in the prefect position to offer an alternative product.

And let's face it, those "muscle cars" handled like crap, had the build quality of a Yugo, and were basically rust-buckets within a few years.  High insurance rates killed them off along with gas prices.  While being a stop-light drag racing star might appeal to teenagers in Michigan, in the rest of the country, where roads had curves, the squealing bias-ply tires on these 4,000 lb behemoths were just, well ridiculous.

We tend to look back nostalgically at the old "muscle cars" of that era, and pay big bucks for restored versions (that are never driven, as that would decrease their value) today.  But having LIVED in that era, I can tell you they were not really great cars at all.  Just a truck engine in a midsized body, in most cases, with little in the way of brake or suspension upgrades.

Nostalgia is a fine and wonderful thing, but don't let it trump reality.  The average Camry of today handles better than the old GTOs, Road Runners, Camaros, etc. of yesteryear.

The GM of today is basically following the same playbook.  The 3.8 Liter Corporate V-6 has largely supplanted the 350 V-8, although the latter is still basically alive today in the pickups, SUVs, Vans, and Corvette.  Esoteric designs like the overhead cam six were again killed off (after they were deemed fit only for the Trailblazer line) in favor of a more generic, less costly, engine - one that dates it heritage to a Buick V-6 from 1965.

While GM has slimmed down and no longer offers the same car in 10 different guises, there is still a lot of overlap in the product line. The same SUV appears in Chevy, Buick, and GMC garb, and various sedans are also shared across product lines.  They still make a lot of "clone cars" and aside from improved build quality and interior trim, are basically the same cars they were selling prior to Bankruptcy.  Where's the new product?

GM is showing wild profits, to be sure - but this is not the result of astute management or skillful engineering.  Rather, it is the result of cost-cutting by eliminated onerous labor rules (paying people not to work) lower wages, and offloading retirement benefits onto the Union.  It would frankly be bizarre if they were not making a profit.

While Ford and Chrysler are introducing new designs into the marketplace, GM is still pushing the same Malibus and Impalas and even Cavaliers (albeit the latter now called a "Cruze") and the same plastic-lined empty steel boxes that they call pickups and SUVs.

Is there anything in the lineup that makes me say "Gee, I should dump my decade-old BMW with 100,000 miles on the clock to buy THIS?"  Well, no, because nothing they have on sale is nicer than my tired old used car in my driveway.