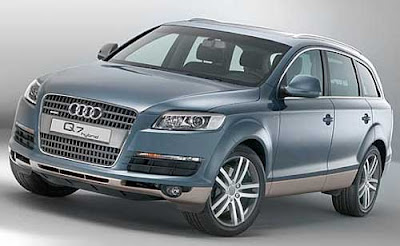 SUVs are wildly popular in the USA and even parts of the rest of the world.  But as practical cars, they really suck.  Why is this?


SUVs suck, let's face it.  They are pretend off-road vehicles that never, ever go off-road.  Most are just based on sedans today and just "styled" to look like rough-and-rugged off-roaders.  But as practical vehicles, they really are lacking.  And yet they are wildly popular for two very emotional reasons:  Men like the rough-and-rugged image they project, and women like to "sit up high" so they can "see out" and feel empowered.

Both bits of emotional reasoning are based on a need to assert power in the lives of the owner - a subtle form of the Culture of Belligerence we now cater to.  People feel weak and powerless in our technological society, so they overcompensate with these pumped-up station wagons.

And that's a pretty pathetic reason to pick a car design.

So why do SUVs suck?  I can think of ten reasons off the top of my head:

1.  Gas Mileage:  Because of their horrible wind profile and all-time AWD, most, if not all, SUVs have crappy gas mileage, compared to a similar-sized station wagon or minivan.  Some makers, such as Audi (shown above) have experimented with hybrid designs, but this is really even more obscene.  Trying to use hybrid technology to improve the gas mileage of an SUV is like a guy weighing 300 lbs drinking diet coke and thinking it helps.

2.  Rollover:  While the rollover tendencies of SUVs have improved in recent years, mostly by lowering them and providing dynamic stability control, SUVs are still top-heavy compared to their automobile counterparts.  And much of this top-heaviness is utterly unnecessary.  As noted above, 99% of these vehicles never go off-road, and thus the touted "high ground clearance" is about as useful as the tail-fins on a '59 Plymouth Fury.  In other words, we are sacrificing safety for style - which to me sounds like a reasonable bargain.  Oh, wait...

3.  Interior Space:  While many people buy these mini-wagons to haul the family around, for the staggering size and height of the vehicles, there is remarkably little usable interior room.  Unlike a mini-van, which has a flat load floor and a tall load height, most SUVs are cramped with drive shaft tunnels and very short rear cargo spaces that are also not very tall.  And much of this room is not very usable, either.  We rented a Ford Excursion recently to haul around a friend's family.  It had LESS ROOM than the Dodge Minivan we had wanted to rent.

4.  Cost:  The extra components in four-wheel drive and AWD vehicles add to the purchase price of the vehicle, making these things more expensive than they need be.  Oddly enough, that is one of the attractions for many buyers - to show their neighbors that they can "afford" a gas-hog overpriced POS SUV.  Status-seeking, pure and simple.  But in terms of an actual bargain in transportation, they are lacking.

5.  Maintenance:  Added complexity means higher maintenance cost down the road, and when you double the number of drive components, you double the complexity of the drivetrain.  CV joints and boots, in particular, are problematic, as the vehicle ages - and they are not cheap to replace, either!  Again, what is the point of having AWD when you never, ever need it?

6.  Crappy Bumpers:  Unlike cars, most SUVs don't have to comply with bumper requirements.  People think SUVs are all "rough and rugged" but are surprised to see them collapse like an accordion when they hit anything.  Many SUVs have thin metal bumpers - with metal thinner than the fenders!  Others have cheap plastic bumpers that don't even meet 2.5 mph impact requirements of cars.  And worst of all, many have SPARE TIRES projecting out the back, so a simple backing accident results in the need for a new tailgate.  OUCH!

7.  Roof Height:  The height is a negative in terms of trying to fit into many older garages and garage spaces.  You have a huge, jacked up vehicle, but no real benefit from the inconvenience of not being able to fit in your garage.

8.  Poor Handling:  Tall cars do not handle well, and while active stability control might help, it cannot counteract the laws of physics.  Cornering ability is horrible, and since most of these things FEEL like they are going to tip over, the typical SUV driver ends up causing traffic delays as they slow down unnecessarily in even the slightest curve.  Since most are heavy and get horrible gas mileage, they also accelerate poorly.  "Lumbering SUV" is not only descriptive, it is redundant!

9.  Crappy Tow Ratings:  Surprisingly, most mid-size SUVs have poor tow ratings - of 3500 lbs or less.  This is usually due to the fact they rely today on car-based chassis.  Some older truck-based SUVs were touted with alarmingly high tow ratings, but manufacturers have backed off many of these, as some smaller SUVs (the old Explorer, for example) were ill-suited to towing an Airstream trailer, for example.  So you get the gas mileage of a pickup truck, without the tow rating.  Sounds like the best of both worlds!  Oh, wait...

10.  Bumper Height Differential:  So, you decide to buy a CAR or a STATION WAGON or MINIVAN instead - to be more practical.  But then some jackalope in an SUV runs into you.  His paper-thin bumper crumbles like old newspaper of course, but since his car is so much higher, it doesn't impact your bumper, but instead takes out your trunk lid, tailgate, or whatever.  A 2.5 MPH collision which should be little more than scratches, now costs hundreds if not thousands of dollars to repair.  And this cost is reflected in the higher costs for all of our insurance.

OK, I hear your response already:  "If you don't like an SUV, then DON'T BUY ONE!" and that has some merit, but not much.

To begin with, the overall "cost" of these vehicles is thrust upon all of us, in terms of the higher insurance rates that they generate because of their more expensive repairs (to themselves and the cars they hit) as well as injuries from rollover accidents.

And then there is the cost to the environment in terms of crappy gas mileage AND the higher cost of fuel for everyone, due to the increased demand by drivers of these gas-sucking monsters.

But the main reason that argument has no merit is that you basically CAN'T AVOID the SUV today - it is all that some carmakers are selling and reason #11 not to like SUVs.  Chrysler, prior to bankruptcy, had a product line that was nearly ALL-SUV.  The even replaced the high-gas mileage econobox NEON with some jacked-up nightmare called the "Dodge Caliber" that even the company's CEO described as "an abomination".

And yes, I have an SUV and dislike all of the features described above.  It has a good tow rating, but lousy mileage, unnecessary AWD, sits up too high, and has very little interior room - for its size.  A similar WAGON would work as well, if not better, but they don't make one of those anymore, just the SUV.

The SUV will probably be with us for some time, but I suspect as time goes on, the idea that you need to have a "rough and rugged" AWD machine (that really isn't) will seem as silly as chromed tail-fins.

But then again, I could be wrong.  America's appetite for stupidity appears to be bottomless.

And a note to potential flamers:  Anyone who professes to "like" and SUV is really an idiot.  Sorry, but I have to say it.  There is nothing really likeable about these vehicles - or memorable.  Like the station wagons of yore, most of them will go to the crushers, unloved and unwanted.  They are not "sexy" cars like a convertible or a sports car - both of which I would much rather drive (and until recently, I had three!).  They are just a less-practical but more status-seeking version of a mini-van, that's all.

They are just BUTT-UGLY CARS, which is probably reason #12 that they suck.   There is no such thing as an "attractive SUV".
Newer Post Older Post Home