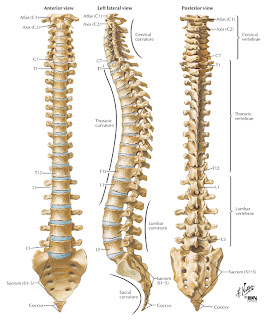 When you are in your 40's and 50's, you may experience some interesting health issues, such as neck and back problems.  It is all a part of growing up and growing old.

Welcome to the second half of your life.  Actually, the last third, if the actuarial tables are any good.  And when you are in your late 40's and early 50's, you may discover that your body has decided to defect from the cause.

What the heck is going on here?  For the most part, it is called getting old, and many people freak out when it happens.  And in many cases, you can throw thousands of dollars of medical treatments at it, and not much changes.  And living here on Old People Island, you get an interesting perspective on it.  You tell some oldster about your ailment and they say, "Yea, I had that when I was your age."

So you ask them what happened.

Grow out of it?  Yea, a lot of what you may think are medical problems end up being transitory things that either your body adjusts to, or you accommodate over time.  You get used to it, I guess.

You have reached the peak of the roller-coaster and now can go "whee!" all the way down.  Because your life is running out and your body is running down.  And no, "this doesn't go on forever" - but that's OK.  Life is still a good deal - and the finite aspect of it makes you appreciate it that much more.

This is not to say you shouldn't see a doctor, but don't be surprised if he yawns and says you're just fine.  They'll run tests, of course, but unless you have some sort of cancer, chances are, they won't do much.

For example, in my late 40's, I started having neck problems.  I had always had a pinched nerve in my neck from my 20's, due to a motorcycle mishap and an over-enthusiastic young friend of mine who decided he wanted a "shoulder ride" and jumped on my neck, causing a loud cracking noise and numbness for two days.

But as I hit 45, my left arm started going numb and my left index finger got numb as well.  I wrote off the latter as a side-effect of an incident with a pneumatic nail gun (don't ask) but the former scared me - was I having a heart attack?

I went to the doctor and he yawned and said, "sounds like a compressed or ruptured disc on the C5 vertebrate pinching a nerve"

As it turns out, this is a common problem, although I thought I had some exotic disease.  And a MRI confirmed the diagnosis and relieved the doctor of a malpractice suit (for failing to diagnose neck cancer or something).

And as it turns out, there was little to do in terms of curing it.  Trying to operate would be problematic - it might "fix" the problem, or possibly paralyze me for life.  Some of those nerves are important - such as the C4 nerve, which drives your diaphragm and makes you breathe - "cut the C4, live no more" as they say in medical school.

So they send you home with muscle relaxants and a prescription to relax and get a massage.  And in a few years, yea, I largely "outgrew" the problem - although most of this was just my body adjusting to the pain and changes in mobility and my brain getting used to not feeling as much from some fingers.

And yes, some of these types of medical problems are stress-related.  It is amazing how better I feel since we paid off our debts - and how much less pain or difficulty I have with these "50-something" growing pains.

Mark had a similar problem with his back.  Again, same deal, we go to the doctor, he immediately diagnoses where the rupture or compressed disc is, a $2000 MRI is needed to confirm this, and the cure is.... nothing.

He tried some sort of injection from a "Dr. Feelgood" here in Brunswick - whose office was full of remarkably healthy-looking people getting scrips for pain-killers.  But the injection backfired and sucked the spinal fluid out of his brain, leaving him with killer migraines.  A "blood patch" seemed to fix the problem.  Lesson learned - never go to a doctor who advertises on billboards!

And of course, the Doctor offered to prescribe pain-killers, including Oxycontin, but we politely refused.

So what fixed the problem?  Massage and heat (from the hot tub) and a massage chair from Sharper Image that I bought online for $89.  Really.  That and better posture and seating and walking habits.  And getting older and "growing out of it".

Again, you could get operated on, but oftentimes the cure is worse than the disease. They can put plastic discs in your back, but it may not make things better - and in fact make them far, far worse.  I've heard horror stories from people who went this route and ended up in chronic staggering pain, as opposed to discomfort.

Of course, many Americans feel that they are entitled to an operation, and in fact, insist on it.  Their body is "broken" and they want it "fixed, good as new" and so are willing to go under the knife and risk horrible outcomes to cure a minor problem that is chronic to most people their age.

Or they want a solution in a pill, and end up like Rush Limbaugh, addicted to pain killers.

A friend of my Mother's had the surgery, and it didn't go well.  She was in a lot of pain over that.

And it goes without saying that losing weight can affect these sorts of problems.  Mark lost 15 pounds and, funny thing, his back problems mostly went away.  A lot cheaper than surgery!

I have other ailments, of course, and for the most part, they are "chronic" and cannot be fully "cured" but rather just "managed".  Diverticulitis could possibly be cured through a bowel resection - but the risk of the operation is far greater than the inconvenience of taking a Metamucil caplet every day.  And besides, some have reported the condition comes back after the operation.  Not worth the risk of peritonitis, frankly.

So, what does this have to do with finances?  Two things.


1.  First, throwing money at medical conditions often doesn't cure them.  Medical Science is not as advanced as you may like to think - we are still at the monkeys-fixing-cars-with-hammers stage in Medical Science.  They whack something and sometimes it seems to help.  But in many cases, they can't really help a lot of conditions.  And this is an interesting observation from both a personal financial view (after having spend $5000 or more on MRIs and treatments) and from a political one (the high cost of health care).

2.  Second, you are very likely to become infirm as you get older, and having your finances in order after age 50 is important.  When you get older, you may not be able to work - or work as well.  So the idea of "working until I'm 70" may sound great, but if you get sick, you'll wish the mortgage was paid off and you didn't have jet-ski payments to make.  Being able to not work is something you should plan on.  And in addition, so many illnesses are stress-related or aggravated by stress, so being debt-free and stress-free can also mean you are healthier.

Of course, the examples I have discussed above apply to our personal medical situation.  CONSULT YOUR DOCTOR for advice on your conditions.  I am not giving medical advice here or promoting non-treatment of medical conditions!

However, if your doctor tells you that basically there is no treatment for a 50-Something malady, don't be surprised.  It happens.