Backing Up Your Data 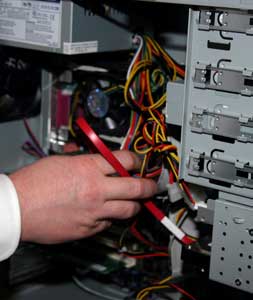 Computers break, which is just a fact of life.  How do you prepare for such an event?

I just installed a new one-terabyte hard drive in my computer.  The old one still "works" but got flakier and flakier as time went on.  Eventually, I tried reformatting it and re-installing Windows Vista (ugh!) but to no avail.   If I removed it and ran CHKDSK on an old XP machine, it would fix the drive and it would work - for a time. But eventually, it would do the old CRCDISK "hang" on boot.

$79 later, we have a new hard drive, and in about four hours, all my software re-installed in a "clean" new Windows installation and all my files transferred over.

How do you back up files and recover them?

Problem is, if your drive crashes because of a boot sector virus, then your backup may include the virus as well - or garbled or mangled file data that is of no use to anyone.

Rather than try to re-copy all your computer files - including all your software, the operating system and the registry "hives" (and the 15 tons of other Windows bullshit), I think a better idea is to copy, manually, your files, and just let the rest go.

So, for example, I copy my working Document files (mostly WORD and PDF documents), my photos, and my music (11,000 songs).  I copy these to an external hard drive, to other computers on my network, to my laptop, and even to my iPod.  And yes, these files can even be copied to the web, although it is hard to do in Google Docs.

When the drive crashes, rather than trying to "restore" the computer to exactly the way you had it, sometimes it is better to start over - reload the Operating System in a "clean" installation, and then manually re-install your software.

Of course, this requires you understand how to load your O/S and software (you don't know how to do this? And they let you use a computer?) and also how to copy files manually from one computer to another on your home network.

And yes, it requires that you have a home network - a router - or at least a removable hard drive.

But not surprisingly, most people don't have much on their computer other than music and photos.  Most people just tweet and facebook and look at websites and don't create real content.  And what content they create (their photos) they fail to back up.

And a simple Windows COPY command is all it takes.

The new HD is running just fine - much faster than before.  And Windows is running better as well.  Sad fact of the matter is, sometimes it is better, after a time, to just reformat the HD and reinstall windows anyway.  Eventually, the registry hives and all the other crapola in Windows gets cluttered up, particularly after you've downloaded umpteen applications and plug-ins.  Its just better to start over from scratch....
Newer Post Older Post Home